Dubai is now the center of the world’s tallest buildings. They have an extremely high Burj Khalifa that has been the world’s tallest skyscraper since 2010. The unbelievable height of 828 meters seems to be just enormous. But a couple of years ago Saudi Arabia amazed the world with its promise to build the next tallest skyscraper in Jeddah city. The building was called Jeddah Tower and it immediately became the most popular construction in the world.

But what happened with Jeddah Tower? Why wasn’t it open in 2020? Where did they spend those billions that were meant to finish the construction in time? Let’s look at some astonishing details of Jeddah Tower. 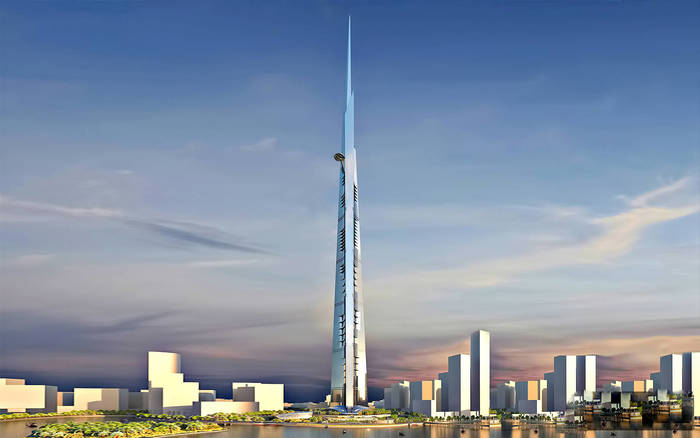 Initial plans for the building

In 2008 the Saudi rich decided that their country has to be the first in terms of tall skyscrapers. The land testing showed that the area could only support a 500-meter building, but the royal family members who were investing in the project insisted on building a 1-kilometer-high construction. Some architects said that it was an insane idea, but in 2011 construction works started.

The estimated finish date was 2017. The future owner of the Jeddah Tower, Kingdom Holding Company, insisted all the way that the project would be finished on time. But in 2017 they were not even halfway to the 1-kilometer height.

Why did they put it on hold?

The project has been on hold since 2018 due to the Saudi Arabian purge that happened in 2017 -2019. During that time a lot of rich people and politicians in Saudi Arabia were arrested and prisoned because of corruption issues. In 2017 they formed an anti-corruption committee, which resulted in a big number of princes and ministers being prisoned within the next 2 years.

Jeddah Tower suffered from the situation because it immediately started lacking money. Also, the labor issues started occurring all the time because of the inner crisis. As a result, in 2018 Jeddah Tower was put on hold and the works haven’t still started over.

There were rumors that the project will never be built because it faced some technical problems. But there is no evidence to prove such claims. We can see that minor construction and maintenance works are carried out, and the equipment is still there, so the building can start growing at any moment.

Will it actually be 1 kilometer high?

The final height of the skyscraper is still kept secret. But you shouldn’t expect it to be shorter than 1000 meters. The building is thought to be the future visit card of Jeddah and Saudi Arabia, so they will make everything possible to ensure that no one can build a skyscraper higher than that in the nearest years.

There are still concerns about the safety of such buildings and there are a lot of troubles that the construction will face on the way. It stands extremely close to the shore of the Red Sea and that may cause problems during windy seasons. The land is not appropriate for holding the huge building, so they will need to invent ways to prepare it.

The huge core may be the problem. Some architects said that to maintain such a building they will need an extremely large core that will occupy nearly all space in the lower and middle levels. The Jeddah Tower design shows wonderful aerodynamics that can help it withstand the wind loads and resist swaying. But anyway, the problems may occur.

Elevators are another issue. You aren’t expected to invent an elevator that is capable of taking you fast enough to 1000 meters in height. So there are 59 elevators and you’ll probably need to change them a couple of times to get to the top level. The Finnish company Kone has developed a special type of elevator for Jeddah Tower. They will travel at the speed of 10 meters per second. There will also be 12 double-deck elevators.

How will they use the tower?

The tower is planned to be a commercial center of Jeddah city. The architects have called the project a vertical city. The building will be home to thousands of people, will provide a place for retail, offices, restaurants. The main part of the tower will be occupied by the Four Seasons Hotel. The building will be the most expensive real estate object in the country in terms of price per 1 square meter.

One more important thing is that architects included an open sky terrace on one of the top levels. It will be an open terrace and the highest observation deck in the world.

Jeddah Tower has some records to break and we hope it will be finished in some years to provide the world’s most interesting building and the tallest skyscraper.