Zhang Ziyu is a Chinese girl that has recently become famous thanks to her height. She is 7 feet 5 inches tall and that's probably taller than any player in the WNBA league. Zhang Ziyu is a basketball star although she is only 14 years old. She is a great example of how a tall girl can find her way in life and open new talents.

The girl is a real star in China now, and her fame started spreading all over the worlds thanks to some viral pictures taken from a basketball tournament in China. Ziyu looks just like a giant in comparison with her teammates and opponents and she keeps bringing wins to her team. Today we’ll look at who Zhang Ziyu is and what future she could have in basketball. 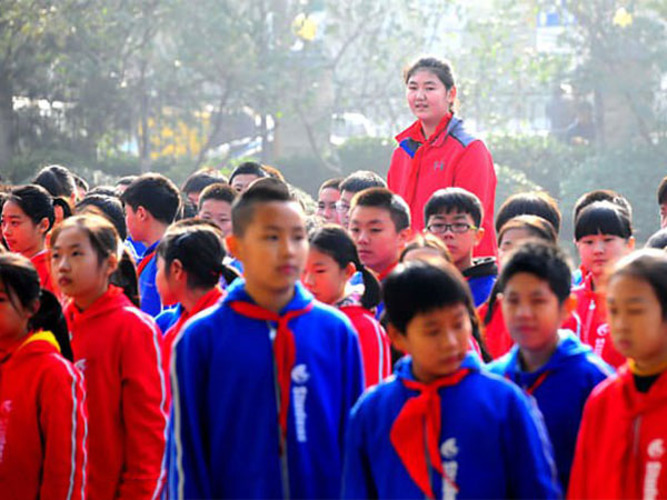 What do we know about Zhang Ziyu?

We know that the girl is 14 years old, she lives in Shandong province in China and she plays basketball really well. In one of the recent games, she made 25 rebounds and also scored 42 points, and guaranteed a confident win for her team. Social media go wild with all new pics and footage featuring this girl.

She is reportedly 7 feet 5 inches or 226 cm tall. And this is incredible, her average teammate is one-third shorter, and these players are still supposed to be tall enough because they play basketball. Ziyu stands out and it seems all pictures with her were photoshopped.

Her unusual height comes from genes. Although the majority of people in China aren’t very tall, Zhang Ziyu’s parents are both quite tall, and they are both former professional basketball players. Her mother, Yu Ying, is a former player for the Chinese national basketball team. Her height is 198 cm or 6 feet 6 inches. Ziyu’s father is 213 cm or 7 feet tall.

But the girl took after her parents not only physically but also mentally. She is a very talented young player, and now sports reporters all over the world say that Zhang Ziyu is the next Chinese Yao Ming. He is probably the most famous Chinese basketball player who built his career in the NBA and was one of the most prominent players in the US.

Interestingly, Zhang Ziyu was already 6 feet 11 inches tall in grade six, now she nearly stopped growing. But doctors still say that this is not her final height. She can probably have a couple of inches more.

But even without additional inches, Zhang Ziyu is now officially the tallest living woman in the world. Ironically, the second place in this rating belongs to another Chinese girl, Sun Fang, who is 7 feet 3 inches tall.

For now, there isn’t much information about Zhang Ziyu and her life, but she’s become a real celebrity, so reporters will do everything possible to get new facts and have interviews with this young lady.

Zhang Ziyu is a really talented basketball player. At least we can say so after watching her rare footage. She can win the ball in the center of the court without even jumping. And she can dunk without jumping much, too. Ziyu can be a wonderful defender, and that’s what usually tall women do in WNBA. They defend the hoop and start their team’s attacks.

Ziyu is probably not the best in the team in terms of running speed, but she has wonderful ball control skills thanks to her height. Her long arms can control the ball while she protects it from opponents with her body. Yes, she lacks some technique, but her parents will probably teach her more tricks.

Her first footage and pictures come from the U15 Chinese National Basketball League. And sports reporters admit that she doesn’t even need to jump to complete rebounds, win the ball, block the opponents’ shots and even dunk! She just stands flatfooted or maybe stands on her tiptoes to achieve 100% success in the game, and that’s amazing.

But still, there are concerns about her health. Being extremely tall does bring you some advantages on the basketball court, but it’s also the reason for more load to the heart. Zhang Ziyu is often seen with her leg in a bandage and that’s another issue. When your legs are very long, they need additional support to run and jump, and basketball can be dangerous for Zhang in the future.

What’s with her future career?

As you probably know, it’s illegal to play in WNBA in the US if you are under 23 years old. Otherwise, recruiters from the best WNBA teams would now be searching for the best tickets to China and would prepare great contracts for Zhang Ziyu. But we believe that the girl will play in China for some more years until one of the American colleges offers her education opportunities along with basketball training. Some college teams like UConn for example may do that.

Only after Zhang is 23 she could potentially play for one of the WNBA teams. But it’s more likely that she will choose WCBA (Women’s Chinese Basketball Association) with nearly every team happy to offer her contracts as soon as she is eligible to play professionally. In the US she could become a celebrity player, but Chinese teams sometimes pay more. So it’s unobvious which way Zhang Ziyu will choose, and we hope we’ll see more of her wonderful games in the nearest future.