Plane spotting became a very popular hobby and even profession. It all started with just some pictures for private collections, but now plane spotters can easily sell their content for a huge amount of money or post it on their social media and start earning money as influencers. Aviation keeps developing, new planes arrive every day to start flying in different companies, aviation businesses change their aircrafts’ liveries – and those are wonderful reasons to get a camera and go to the nearest airport to spot some planes. 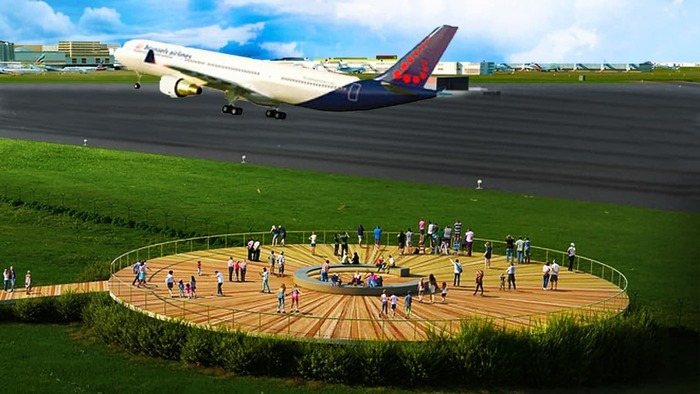 But to get really cool pictures, you’ll need to choose some great locations. Your local airport may be the desired place for hundreds of other plane spotters with their cameras ready to picture landings and takeoffs of all planes. Also, it’s sometimes really hard to get good pictures near the majority of airports. So finding a good location is actually the key to success in plane spotting. And we don’t talk now about financial success, but about your inner feelings of accomplishment when you have a pack of wonderful pictures with rare planes taken from ideal angles.

Let’s start our journey through the hidden plane spotting locations throughout the world. And yeah, we won’t take into account places like Maho Beach in St. Maarten island, because every single photographer knows it.

Los Angeles International Airport is the second busiest airport in the US. Plane spotters from all over the world come here to take pictures of huge planes departing and landing here. Boeing 787 or Airbus A380 is a normal thing here, they land and depart every hour. LAX welcomes hundreds of planes each day and nearly half of them fly over the In-N-Out fast-food restaurant. The restaurant is situated very close to the airport and its location is ideal for taking wonderful urbanized pictures of planes. You may choose the angel that you want and have unique pictures with planes from all around the globe.

Even if you were here yesterday, it wouldn’t be a bad idea to come today. Other planes with other liveries and even more spectacular takeoffs are waiting for you and your camera. The fast-food restaurant is located at West 92nd Street. There is even a patio to sit and wait for the next plane to arrive. Don’t forget to use LAX online services to see what kinds of planes are going to arrive or depart. Because the urban landscape won’t allow you to take a lot of time for spotting a plane. You’ll have 3 to 4 seconds to take a picture until the plane is gone.

In-N-Out Burger isn’t only a good place to sit and chill out when your flight is rescheduled. It’s also a home for many plane spotters. They always sit there at the tables on the patio and wait for the next plane. The spot is unique because there are virtually no places where you can spot the planes with an urban background.

Thailand is one of the most desired holiday locations in the world. The weather here is great for beach holidays throughout the year. If you want to go to Thailand, you will probably need to fly to Phuket. This city has a lot of resort locations. From all over the world, planes fly there, so there are lots of huge long-haul aircraft that are the best objects to spot for a plane spotter.

Phuket International Airport is situated right near a couple of popular beaches, and pictures here are even better than at Maho Beach which is often thought to be the best plane spotting location in the world. You may ask why. The answer is very simple: here you’ll have a lot of time to get ready to spot the plane and you’ll really have a wide range of locations to make different pictures. On Maho Beach, you are standing right under the plane when it flies over you, and yes, that creates special feelings. But it makes it hard to spot a plane correctly.

In Phuket, it’s really easy as you have a huge beach line to locate and not many other spotters around. As for the plane range, Phuket wins again, because here you can find all types of long-haul planes. At Maho Beach, the biggest plane you can see now is Boeing 737, and these are very rare there because of a short runway. Usually, small regional planes fly there. But Phuket offers a much wider range with much more comfortable conditions for spotters.

Third: The Panorama Terrace in Amsterdam

Amsterdam is one of Europe’s aviation hubs, so planes from all over the globe come here. You are expected to see hundreds of regular Boings 737 and Airbuses A320 on runways, but this airport can offer all kinds of planes. The range starts from up-to-date regional planes and private jets of all brands and finishes with huge cargo planes and passenger giants. Every hour dozens of flights depart and land here. If you want to spot all kinds of planes that fly in Europe, you might need a ticket to a special observation deck. The authorities of Amsterdam have built it to let people watch how the airport works. And that’s a very popular place.

But a lot of beginners in plane spotting don’t know about the location, so they picture planes in Amsterdam right from the streets which is actually quite hard. The observation deck is a special building that is much higher than the airport. So after getting up the deck you can see all the airport’s life. It’s located right near the Schiphol Airport in Amsterdam. The observation terrace is located outside the security zone, so you won’t need to be the client of the airport to get up. From the deck, you see the runways, the terminals, planes.

There are even tables and benches and binocular rentals up the terrace. During a high touristy season, the restaurant works on the terrace serving Heineken beer and some snacks. There aren’t usually a lot of people as tourists have other great spots to see in Amsterdam. This terrace is the favorite place in the city for local plane spotters and they don’t tend to tell anyone about it. So, take it on your list!

JFK Airport is the busiest aviation object in the US and probably even in the world. It offers all kinds of planes, including the most luxurious private jets that are always the best targets of plane spotters. If you want to observe big and small planes coming to New York and leaving the Big Apple, you can do it from a 10 000 square feet observation deck in a luxurious TWA hotel that recently opened right in the airport. It has a huge deck equipped for spotters and also a pool to have some rest between arrivals. Well, if you love planes, you won’t have time to rest while you are in the TWA Hotel.

The observation deck overlooks the JFK’s Bay Runway which is the second largest in North America. When big planes depart or arrive, you just feel their vibration and you see them as close as in no other spot. Yes, sleeping in this hotel may be a hard task, because planes take off every other minute, but the spotters will find the place so good that they probably won’t sleep at all while staying there.

The Visitors’ Park at Munich Airport

The Munich Airport (MUC) is quite big and active, so here you can spot nearly all kinds of planes. You may know that the Frankfurt Airport is the best place for spotting planes in Germany. This is one of the biggest hub airports in Western Europe. But it has few facilities for spotters. In Munich Airport you will find a specially built park for those who love planes. It’s called ‘Visitors’ Park’ and you can come here at any time, take your place on a comfortable bench and start taking pictures of all planes that land here or take off from Munich.

Nearly half of the planes here are private jets and small regional planes, but still, you can spot here a huge Airbus or Boeing, some rare models of cargo planes. Munich is probably the most comfortable place for spotting planes and few people know about that. You can always find a vacant bench in the park and choose the best angle for your pictures.