These superyachts are almost never for sale in the open market. Ace is the yacht made by Lurssen, one of the most famous shipyards in the world. The 85-meter-long yacht is a luxurious thing that was specially made for Yuri Kosiuk, its first owner. The boat can travel at the speed of 17.8 knots which is over 20 mph. The huge boat is now for sale and we decided to learn why. Did Lurssen make something wrong? Has the owner run out of money? Why is it one of the most luxurious yachts in the world for sale?

At first, we want to say that the yacht is actually one of the most beautiful vessels in the world and it’s worth every cent that it was paid for. 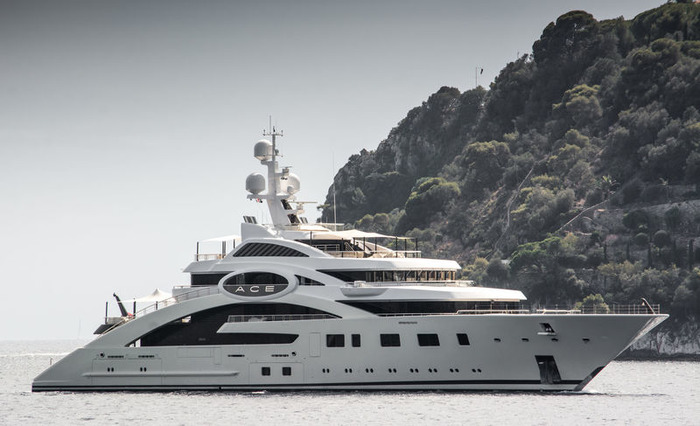 The boat is an extraordinary possession

Yuri Kosiuk is a Ukrainian businessman and as you may predict, a billionaire. In 2012 the Ukrainian society was surprised to hear that Yuri got his extremely expensive yacht. The initial price of the boat wasn’t even disclosed, but we believe it was somewhere near $200 million. To understand how expensive the yacht actually was, you just need to know that a special Support ship was built in 2012 just to follow the yacht wherever it goes and ensures that any technical problem is solved within hours.

The length of 280 feet is something incredible for a private vessel. There are only some boats in the world that can boast a bigger length than Ace. The yacht is equipped with 2 German engines each showing 2700 horsepower. The boat is ranked 93rd in the world in terms of length, but you can think it’s in the first dozen of boats if we speak about the price and luxurious interiors.

Every room is made in different styles, all materials are carefully chosen to keep the boat active for years to go. New stabilization systems make it possible to cross any seas and oceans without problems even during storms. The boat is a technological miracle, and even now Lurssen rarely builds something like this.

Built with uncompromising quality, Ace’s exquisitely designed interior has an atmosphere of traditional elegance created through the use of opulent contemporary and classic furniture, fabrics, and lighting with a rich, creamy color scheme. Its unusual layout includes an owner’s suite on the bridge deck with a full-beam cabin, sitting room, office, and access to private balconies on both sides. Four further and very spacious guest cabins are located on the main deck, accessed via a large sweeping staircase.

Inside and out Ace has ample communal guest areas, including a stunning top deck with shaded seating and lounging areas, and a centrally located air-conditioned tea room for those looking for a refuge from the midday sun. The upper deck also has both a lounge and bar area leading to a large alfresco dining area aft and a formal lounge area with formal dining located forward.

Leisure facilities include a large pool on the top deck and a stunning beach club area on the lower deck, with a jacuzzi and plunge pool located adjacent to a large spa with a sauna and hammam. Other facilities include a dedicated cinema room with tiered seating and sumptuous lounge chairs, a gym, and a beauty salon. Ace has a full complement of tenders and toys including an 8.9m Hinckley Talaria tender, scuba diving equipment, SeaBobs, jet skis, and inflatables.

Ace also features a helipad suitable for the take-off and landing of small and middle-sized helicopters and is equipped with Quantum XT zero speed stabilizers, making it a stable platform whatever the weather.

What about the prices?

Well, the yacht was built in 2012 by Lurssen and was said to be one of the most expensive yachts in the world at that time. No one can tell you now for sure how much the owner paid for it. But the estimated initial price is about $180-220 million. In 2018 the yacht was refitted by the producer. We believe no major changes were made, just some maintenance service and repairs. Also, the interior parts were replaced due to wear and teat for 6 years of use.

We have to admit that the yacht was designed by Andrew Winch and it’s still very modern and up-to-date. If you buy one, you won’t need to change anything in its looks for years. The Lurssen Company also claimed that the yacht was built in cooperation with ecological organizations to shorten its impact on the ocean. That may have caused a bigger initial price.

The Ace yacht has been owned by one private owner, Yuri Kosiuk, who is known for his great experience with luxurious yachts. It proves that the vessel is in wonderful condition and still costs a lot.

Finally, the price that they want to get for the yacht is amazing. It’s $137 million. It makes it the second most expensive yacht currently for sale after Octopus. But still, there is a question: why did Yuri Kosiuk decide to sell the boat that is one of the most expensive yachts in the world? We can’t say that Ace is old enough. For the boat of its class, you can use it for 20 years before the first big repair and refitting. So, it’s still a big question.

Yuri Kosiuk is known to be in TOP 10 richest people in Ukraine. He had always had good relations with the country’s presidents until 2019. But with new political powers and a new course for internal policy against tycoons and oligarchs, Yuri started losing his business. Today he keeps falling in the Forbes rating and selling his possessions.

His net worth is still very high and is estimated by Forbes to be nearly 1.1 billion dollars. But the things are not so good, because Yuri’s fortune stands still without growing as fast as he probably wants. That’s why he may need huge sums of money to change the way his business works or for major investments in other spheres.

This explains why Ace yacht got to the market for sale. Kosiuk just needs the money to cover his business problems. And that’s good news for those who wanted to buy a luxurious yacht. Bargains and perks are possible if you buy a luxurious thing from a person who desperately needs money.

Are there any problems with Ace?

Up until now, there was not a single accident with the Ace yacht registered. Yuri is a very experienced yacht owner and he knows how to deal with luxurious vessels. What’s even more, he hired a crew that had even more experience in using and maintaining boats and ships of all kinds. So we believe the Ace yacht is still in very good condition.

Though, there may have been some minor accidents that weren’t registered properly. Ace was often used in the Black Sea known to have poor navigation from Ukrainian marine authorities and an inconvenient shoreline for a vessel like Ace. The yacht was spotted in many places where you wouldn’t want your extremely expensive yacht to go. There is only one hope that the captain was very good.

One thing that proves there were no major accidents is that you are unlikely to find a shipyard for repairing such a yacht in Ukraine or somewhere near. So it should only be transported to Lurssen for renovation, refitting, or major repair. Lurssen would register any kinds of accidents, but we found no records like that.

Garcon Ship – is it for sale too?

We mentioned the special support ship built to maintain the Ace yacht. This ship is Garcon and it’s nearly the same size as the yacht itself. Garcon is used for carrying additional fuel, parts, crew, water toys, and tenders. It can accommodate 20 crew members in case if Ace crew needs some changes. Garcon can store up to 350 000 liters of marine diesel making long trips very quick for Ace.

Instead of following the Ace yacht, Gracon is often used for other purposes. It overtakes Ace and gets all the tenders prepared for use in a certain spot until ACE comes to this spot. Also, Garcon is a separate vessel that won’t be sold with Ace. We believe it may cost millions of dollars, but the future owner of Ace will want this vessel for sure.

The boat will be available for sale for a long time because you won’t find a client for a yacht that costs over $100 million for one month. These deals usually take years, so you have some time to spare some money and try to buy the Ace yacht!