Alina Zagitova is a famous Russian figure skater, a 2018 Olympic Champion. We are fond of her, and we have told you about her in our recent videos. But today we want to look at her life, to see if she’s happy with her early success and wonderful profession.

Alina Zagitova was born in 2002, her father is a well-known Hockey player. Alina is Tatar and she’s Muslim, although her native city is Izhevsk where the majority of people are Russian and orthodox Christians. Thanks to her Tatar parents, Alina has quite a unique and exotic appearance that makes her one of the most beautiful figure skaters in the world. She says it’s thanks to her mother she could succeed as a figure skater. Her mother, Leysan, dreamt of becoming a figure skater herself as a child and she did everything to help her daughter achieve this dream. 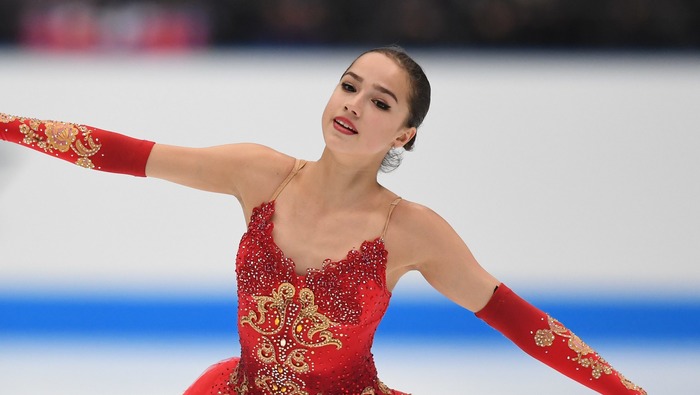 Childhood and first steps in the sport

Alina Zagitova says that her parents couldn’t give her a name until she was 1 year old. Once they were watching gymnastics and saw a beautiful Russian athlete, Alina Kabaeva, and they decided to give their daughter this name: Alina.

Her father achieved a lot of success as a hockey player and later coach. But he gave up his career for being there for his daughter. In 2020 Alina’s father finished his career as a hockey coach and relocated to Moscow where his daughter was living and training at that time.

Aline has always had massive support from her parents. But she also says that her parents have never pushed her to do sport. Alina started her professional career when she was 7, and that’s quite late for a figure skater. But before that, she was skating for fun and her father showed her some tricks on the ice.

Alina has a younger sister, Sabina, who is also a figure skater. But Sabina admits that she will never achieve the heights that her sister has already achieved. The girls have warm relationships and always help each other.
Now all the family lives in Moscow and they are friendly enough. Alina is always followed by her mother, wherever she goes. And that eternal support created new opportunities for success in each sphere of Alina’s life.

What about private life?

Alina Zagitova has been very busy with her career, so she hasn’t had any time for boyfriends. Well, at least the media don’t know about her relationships. In 2020 she finished school and started studying in one of the Moscow universities to become a journalist.

There were rumors that Zagitova was in a romantic relationship with Yuzuru Hanyu, a Japanese figure skater, the legendary two-times Olympic champion. But Alina herself commented that she could only speak to Yuzuru about some simple things because she couldn’t speak Japanese or English and Hanyu didn’t speak Russian.

Unfortunately, her private life in Russia is kept in secret, the girl doesn’t show up much with guys and doesn’t create many opportunities for rumors. But still, there is something you might want to know about her.

She owns a dog – Akita Inu. The dog’s name is Masaru and the most interesting thing about it is that it was presented to her by the Prime Minister of Japan. The dog is very kind and affectionate, so she posts a lot of pictures with it on social media.

Main achievements as a figure skater

Alina Zagitova was the first Russian figure skater to win all possible medals in figure skating for ladies. Before that, only a South Korean girl, Yuna Kim, could do the same. Also, she is the youngest lady to win these medals.
She’s still holding 9th place in the world rating of skaters that includes all sportspeople in all skating events. Of course, the most prominent golden medal was the one in Olympics in 2018. The Olympics made her famous all over the world.

Seems natural that after achieving absolutely everything in her career, she decided to change the way of her life. But let’s talk about it later.

Alina loves painting and says that this is the hobby of her life. She gets relaxed when she paints something. And we can say that she is quite good at painting from the pictures that she posts on her social media. It seems that she could make an astonishing career as a painter if she wanted to.

There is one more hobby that she has now. It’s dog training. Akita Inu are very clever dogs and you can make them do nearly anything you want. But for developing their intelligence you have to train them every day while they are still little puppies. And that’s what Alina is doing now in her free time.

Why did she stop her career?

As you probably know, Alina Zagitova decided to put her career as a figure skater on hold. She says that when you are 15 or 16, it’s the best time to achieve incredible heights in figure skating. But when you are 18, it’s quite hard to compete with talented 15-year-old girls who have even better training conditions and better physique. So, in 2020 Alina decided to stop taking part in competitions and started her higher education.

For now, she takes part in a lot of shows and performances as a skater and she’s also a TV presenter in Russia. She’s known to take part in marvelous shows in Japan, too. But still, she has chosen to stop skating and decided to develop in different ways.

Since 2019 Alina Zagitova has had a lot of contracts with different brands, mainly from Russia. She takes part in advertising photoshoots and campaigns, and that brings her much more money than figure skating. Reportedly, she has earned over $1.1 million from 2019.

We can see that she’s doing well because recently she bought a new Porsche car for commuting from home to university. You would easily spend $100 000 on such a car and that caused a new portion of rumors about Zagitova’s romantic relationships. But we believe that the girl could buy the Porshe for her own money earned as an Olympic Champion and a popular advertising model.

Zagitova wasn’t ready to get a lot of criticism when she stopped her professional career as a figure skater. People started posting angry comments and telling her that she was a betrayer of her coaches and even motherland.
When she started posting a lot of advertising posts on her social media and working as a blogger, her fans were posting offensive comments telling her to stop selling her popularity and to get back to ice.

Also, her first steps as a TV presenter were once again the reason for criticism. She has spent a year studying with private teachers to improve her speaking skills and to gain a new audience after failing to succeed on TV for the first time.

But as you see, Alina doesn’t care about criticism and haters. She knows what she wants and she is going to get that.

Zagitova is still a very popular sportsperson in Russia and in the whole world. She’s going to build her career as a TV presenter, media person, or journalist. But she doesn’t say that it’s impossible for her to come back to figure skating. The world has seen a lot of figure skaters who achieved success after 20 and Alina has a lot in store to show to the world.

Now, Alina is a TV presenter at one of the most popular TV channels in Russia. She’s a presenter at the show called “Ice Age”. As you understand, she skates all around the ice rink and has a professional skater as a partner there. But she’s got a lot of criticism about her work.

We wish that she could find the best place to be and the best people to have around. And we hope to hear more great sports news featuring Alina Zagitova as the winner.