On Tuesday, Apple held its virtual event dubbed "One More Thing" where it revealed new MacBooks and provided viewers with a closer look at the M1, Apple's first chip designed for the Mac. Johny Srouji, Apple's SVP of hardware technologies, led a presentation focused on the chip's configuration and capabilities.

In the past, the Mac relied on multiple components including dedicated chips for the CPU processor, I/O, memory, security, and thunderbolt controller. The M1 reimagines this internal computing configuration bringing these elements into a single system on a chip.

The chip setup utilizes Apple's unified memory architecture. As a result, all of the components of the chips are able to "access the same data without copying it between multiple pools of memory" improving efficiency and device performance, explained Srouji. With this design, the M1 also packs 16 billion transistors, the most Apple has ever placed on a chip.

The M1's 8-core CPU consists of four high-performance cores and four high-efficiency cores. The high-performance core is the world's fastest CPU core "when it comes to low‑power silicon" and the high-efficiency cores use one-10th of the power, according to Apple. Compared to the "latest PC laptop chip," the M1 is able to deliver two-times faster CPU performance and match "peak PC performance" while using one-quarter of the power. The M1 design also includes up to eight GPU cores capable of executing "nearly 25,000 threads" concurrently. Compared to the "latest PC laptop chip," the M1 is able to provide GPU performance that is up to two-times faster, per Apple. The M1 is also capable of matching peak PC performance with one-third of the power consumption. The M1 also boasts a 16-core neural engine. Apple estimates the latest neural engine is able to execute 11 trillion operations per second. In tandem, the neural engine, GPU, and machine learning accelerators, allow the M1 to deliver machine learning performance that is up to 15-times faster. Apple said the M1 capabilities will enable voice recognition, image processing, and video analysis at "a level of performance never seen before on the Mac." The M1 configuration also includes an image signal processor (ISP) to enhance video quality and decrease noise, and more. A Thunderbolt controller offers up to 40Gbps transfer speeds and a dedicated Secure Enclave boosts device security. The build also includes media encode decode engines. 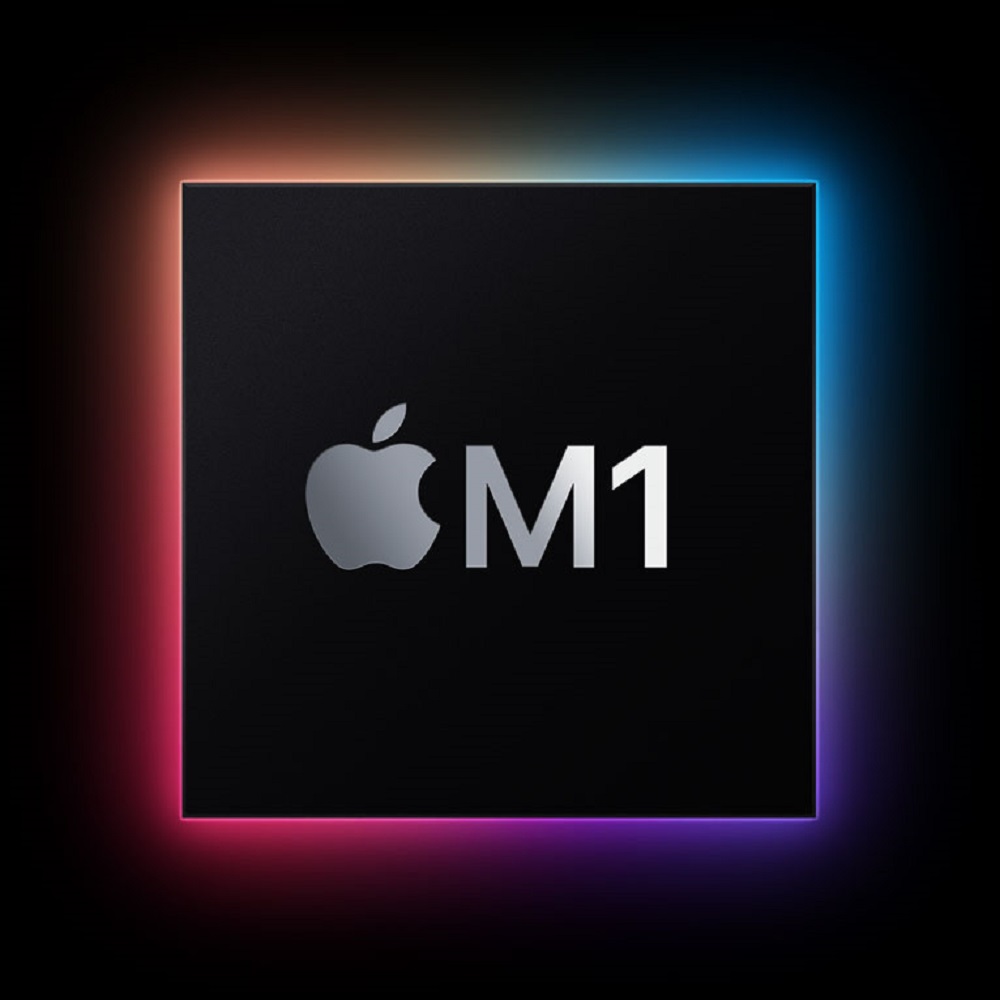 The Apple M1 is the first ARM-based system on a chip (SoC) designed by Apple Inc. as a central processing unit (CPU) for its line of Macintosh computers. It was inspired by their ARM A14 chip.It is deployed in the MacBook Air (M1, 2020), Mac mini (M1, 2020), and the MacBook Pro (13-inch, M1, 2020). It is the first personal computer chip built using a 5 nm process. Apple claims that it has the world's fastest CPU core "in low power silicon" and the world's best CPU performance per watt.

The M1 has four high-performance 'Firestorm' and four energy-efficient 'Icestorm' cores, providing a configuration similar to ARM DynamIQ and Intel's hybrid Lakefield and Alder Lake processors.This combination allows power-use optimizations not possible with previous Apple–Intel architecture devices. Apple claims the energy-efficient cores use one tenth the power of the high-performance ones. The high-performance cores have 192 KB of L1 instruction cache and 128 KB of L1 data cache and share a 12 MB L2 cache; the energy-efficient cores have a 128 KB L1 instruction cache, 64 KB L1 data cache, and a shared 4 MB L2 cache. The Ice Storm "E cluster" has a frequency of 0.6–2.064 GHz and a 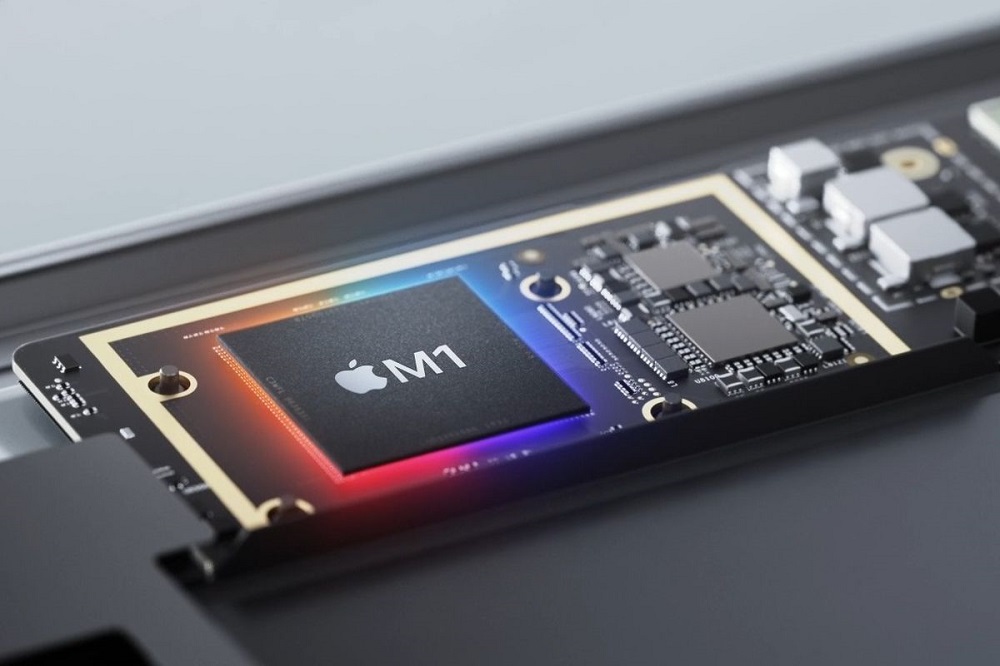 The M1 uses 4266 MT/s LPDDR4X SDRAM in a unified memory configuration shared by all the components of the processor. The SoC and RAM chips are mounted together in a system-in-a-package design. 8 GB and 16 GB configurations are available.

The M1 integrates an Apple-designed eight-core (seven in some models) graphics processing unit (GPU). Each GPU core contains eight "executions units (EUs)", which in turn contain eight ALUs per execution unit. In total, the M1 GPU contains up to 128 EUs and 1024 ALUs, which by Apple's claim can execute nearly 25,000 threads simultaneously and have a maximum floating point (FP32) performance of 2.6 TFLOPs.

The M1 was welcomed with very positive reviews and recorded industry-leading performance and efficiency in popular benchmarks (GeekBench 5, Cinebench R23).The benchmarking methodology for single thread synthetic benchmarks was criticized as being flawed when comparing to simultaneous multithreading enabled x86 CPUs.

Since the release, some users who charge M1 devices through USB-C hubs are reporting bricking their device.

The devices that are reported to cause this issue are no-name USB-C hubs and non-Thunderbolt docks (excluding Apple's own dongle.)

Apple is handling this issue with a logic board replacement and by telling their customers to not charge through those hubs. 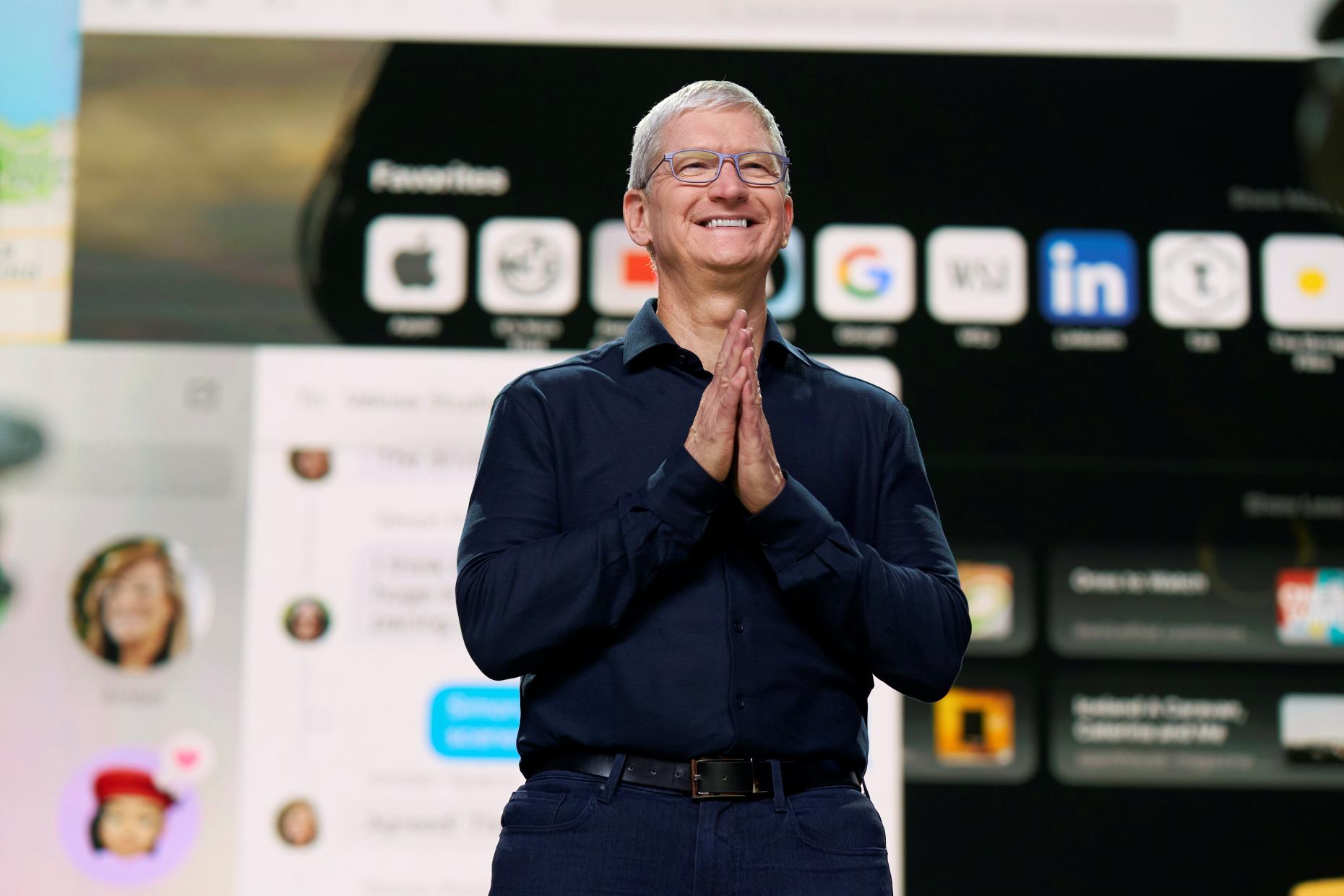 Products that include the Apple M1

Intel is hitting back at Apple’s new M1 MacBooks with some benchmarks of its own, after early reviews showed impressive performance and battery life from Apple’s ARM-based chips.

In benchmarks published by Tom’s Hardware, Intel compares its 11th Gen Core i7 processor with the M1 CPU found in the latest MacBook Pro. Intel claims its latest chips beat Apple’s M1 performance by 30 percent in overall Chrome browsing tasks, and every one of its carefully selected Office 365 tasks.

Intel’s benchmarks also include comparisons between HandBrake transcoding, Adobe Premiere Pro exports, and tasks in both Photoshop and Lightroom Classic. Intel’s 11th Gen chips beat Apple’s M1 in all of these tasks, too.

Intel also tested gaming across both chips, mainly to point out that most games aren’t available on macOS. Out of the games tested, Shadow of the Tomb Raider, Hitman, and Borderlands 3 all run at higher average framerates on the M1, though. 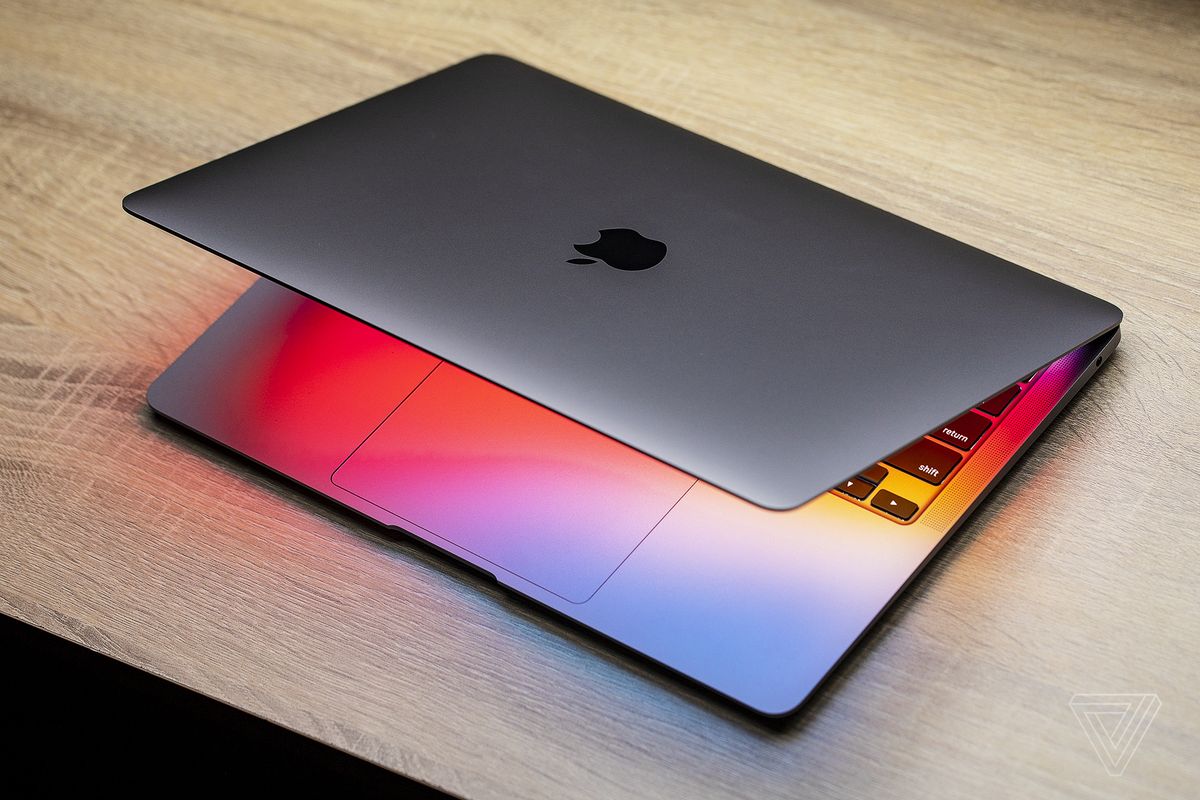 This range of benchmarks are clearly cherry picked to favor Intel’s chips, especially as some make use of Intel’s hardware acceleration. Most of the tests aren’t industry standard benchmarks, and Intel even swapped out the MacBook Pro it was testing with a MacBook Air specifically for the battery life tests. Reviewers have regularly found the MacBook Pro battery life to be superior to the MacBook Air and similar Windows laptops, but Intel used the Air for its comparisons to show it only beat PCs by six minutes.

Intel also argues that PCs offer more choice, better peripheral compatibility, and multi-monitor support. These are particularly valid points, especially when you consider that the M1 MacBook Pro and Air only support a single external display.

What Intel’s hand-picked benchmarks don’t really cover is the experience of using an M1 device compared to existing Intel-based MacBooks. Apple’s latest laptops are silent during most operations, with no loud fans spinning up, impressive battery life, and solid software compatibility. Apple’s processor transition to its own silicon has been surprisingly smooth, and this is just the first generation of chips to make it to market. 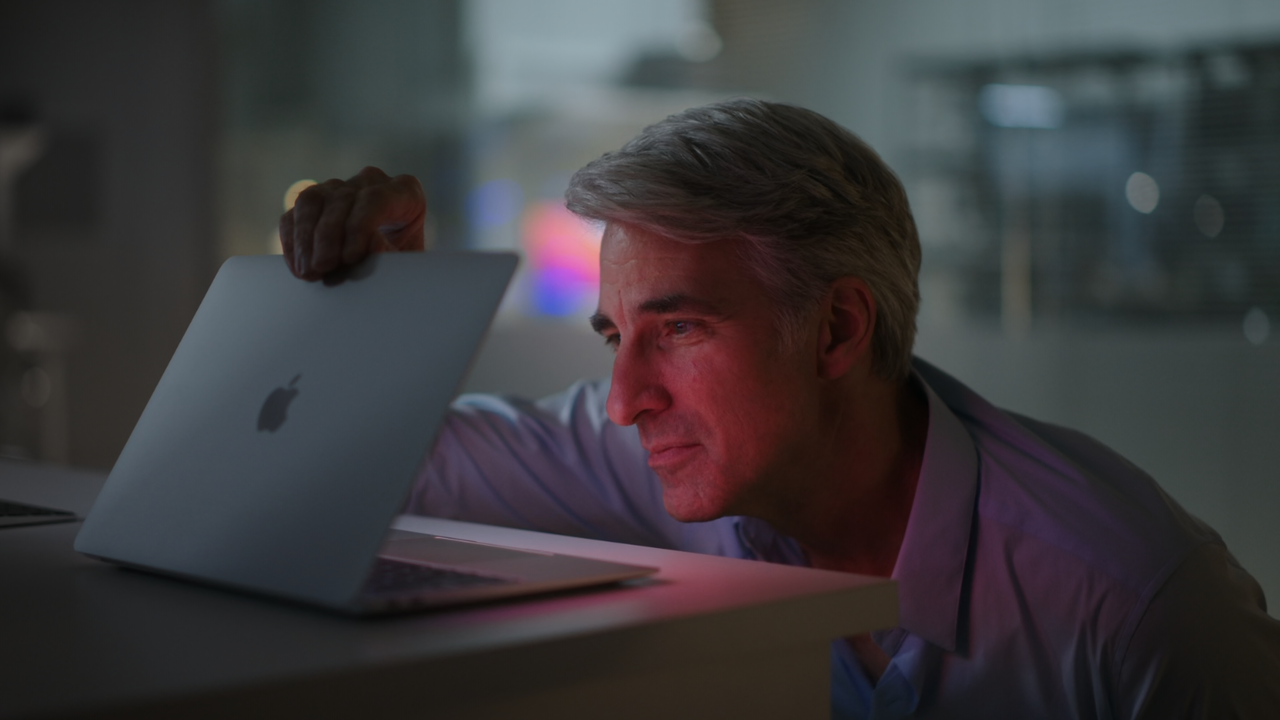 Intel is clearly concerned by Apple’s first chips, and we’re now waiting for the company to respond with its own processors instead of benchmarks. The entire PC industry will need to respond to Apple, at a time when laptop sales are growing. Intel’s new CEO, Pat Gelsinger, looks set to battle Apple’s M1 chips in the years ahead, and he’s already made it clear that Intel has to beat Apple in the future.