Football fans from Spain and probably from all over Europe know that Bernabeu stadium is now under construction. Madrid authorities and Real Madrid owners cooperated to create the most up-to-date and the most beautiful stadium on the continent. And they successfully achieve their goal. Right now, the stadium is being prepared for the new roof installation and it will look amazing. Soon first matches will be hosted here, and those who love football will be able to attend one of the most modern venues in the whole world.

Did we say the whole world? Well, let’s check whether Santiago Bernabeu can be the best football stadium in the world. If you want to find the best venues for playing football around the globe, you’ll need to look for them in the countries that are thought to be the best in football. And here comes Latin America with its wonderful national team, love for football, and great public support of sports. In Brazil, there is a new stadium that is going to open in 2022, and it will be amazing. Arena MRV is worth comparing with Santiago Bernabeu. 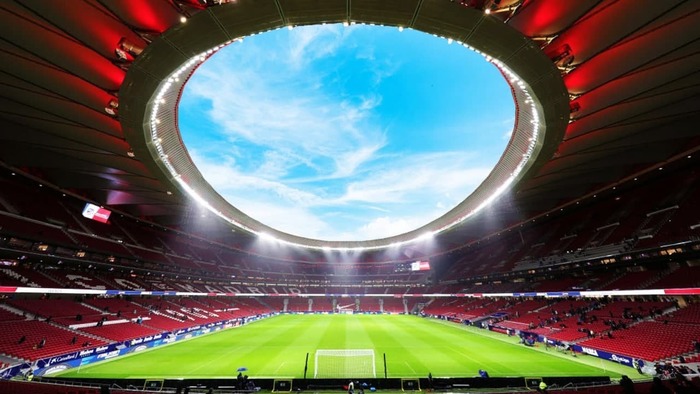 Arena MRV – the most important facts

The project was designed in 2014 by a Brazilian company with a very hard-to-pronounce name. The construction works started in 2020 and the contractor is going to finish it by the end of 2022. The new stadium is located in Belo Horizonte city with a population of over 2.7 million people. So you may expect it to be really huge. But actually, the stadium is going to be able to host slightly more than 47 000 people. That’s not so much if you compare it with the mega stadiums all around the world.

Arena MRV is going to be the home of Atletico Mineiro football club. The stadium will be fully private and it will belong to the Atletico Mineiro club. The construction is sponsored by the owners of the team. The stadium design is said to have a lot of common features with Allianz Arena in Munich. The designer had never designed stadiums before and he spent a lot of time visiting sports arenas all over the world. We can say for sure that Arena MRV will be a unique construction, although it was inspired by other great stadiums.

The area wasn’t the best spot for building a stadium as it had a high slope. So they spent months just digging all the land to make the area even. Now, there are planned entrances on different levels. On one side fans will enter the stadium at field level, but on the other side, the entrances will be at the height of the middle tier.

Brazil’s largest car parking is going to be built there after the stadium is ready. It will be able to take 4 600 cars. Also, they are going to build the club’s museum and megastore within the stadium. The area around the venue will also be changed. They are planning a big public plaza in front of the stadium. The location near huge road intersections seems to be quite good in terms of future traffic.

Is Santiago Bernabeu much better?

Well, Santiago Bernabeu is not being built from scratch. It’s now being reconstructed. And yes, we can say it will be better in many ways. For example, we see that the Spanish stadium will have a retracted roof that will cover the field in case of bad weather. Arena MRV is going to be open. Also, Real Madrid stadium is able to host over 81 000 people and that’s nearly twice more than Arena MRV.

To get to Arena MRV from the center of Belo Horizonte you’ll need to take some kind of transport – the stadium is located in suburbs, nearly 10 kilometers away from the city center. Santiago Bernabeu is basically in the center of Madrid, so you will only need to take a walk along the city’s best buildings and sights to get to the match of your favorite team.

Santiago Bernabeu is located in the capital of Spain and that makes it much easier for people from all over the world to come there and visit any match of Real Madrid. Flights from all continents come to Madrid, so transportation won’t be a problem. If you want to visit the Atletico Mineiro game in Belo Horizonte, you aren’t likely to find many international flights to that city. Instead, you’ll need to fly to Brasilia or Rio. MRV Arena is 700 kilometers away from the country’s capital and 500 kilometers away from Rio.

The estimated cost of building Arena MRV is $113 million. The reconstruction of Santiago Bernabeu will cost at least 7 times more.

So we believe that Santiago Bernabeu is much better than Arena MRV. But we are very glad that Brazilian football gets investments and keeps developing because we enjoy watching Brazil National Team doing their magic on the field and we believe that good stadiums like Arena MRV will make more talented young players start playing football instead of being involved in some bad things.