Jordan Larson is the legend of American women's volleyball. She is a three-time Olympic medalist. She took part in the three Olympic Games and won bronze, silver, and gold with her team. Jordan has been playing volleyball professionally since her high school education, and she seems to be one of the most experienced players in the US among women.

She was born in 1986 in Fremont, Nebraska. Her first professional steps at volleyball were with the Logan View High School team in Hooper. Then she played for the University of Nebraska and set a couple of records taking her team much higher in the ratings than it had ever been. Larson seems to bring good luck to her teams – whenever she is on the court, her team goes to impossible wins. 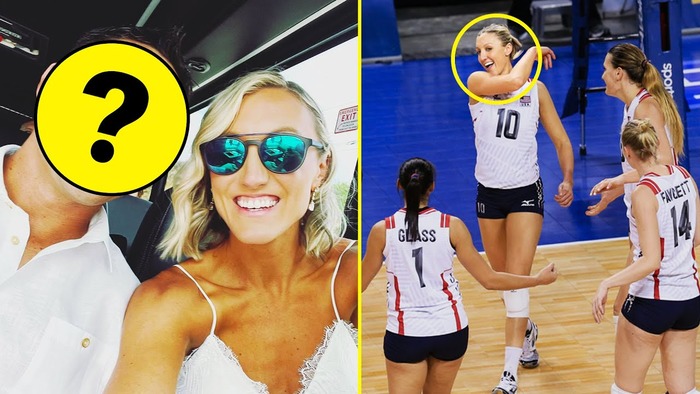 But we love Jordan Larson not only for her sports achievements. She is a great person, a very beautiful and tall woman with bright life. Today we will tell you something new about Jordan and her personal life.

Jordan Larson is 6 feet 3 inches tall – it makes 190 cm. Being a tall girl is a really important thing for a woman volleyball player. Jordan can block at 295 cm and spike at 302 cm which turns her into a very precious player on the court.

As you probably know our channel is all about tall girls. We adore how they look and we can’t stop telling you about them.

Being 6 feet 3 inches tall, this girl looks perfect. She is very sporty. Of course, when she is on the court, you can’t say that she is extremely tall because other volleyball players are tall, too. But if you look at her pictures with ordinary people, you will see how different she is.

Little was known about Jordan’s private life before she started playing for the US national team. But we know that in 2009 she married Luke Burbach. It was nearly one year after she graduated from university. And as you can predict, the early marriage didn’t last long. Due to Jordan’s sports career and many trips all around the world, they couldn’t be together and split up soon after being married. Again, we don’t know much about their marriage and we can’t tell you if they were happy even when they started it all.

In August 2021 Jordan and David got married. Their marriage pictures were uploaded to social media and it was a surprise for fans because Jordan has never been too open about her private life and no one actually knew that she was going to marry her boyfriend. Now Jordan Larson is married for the second time and she looks as happy as she has never looked before.

But Jordan is still devoted to the sport. Her fans say that she made a wise choice when she married a volleyball coach who understands what it takes to be a professional volleyball player. Even though Jordan is currently 34 years old, she keeps playing professionally and has never been heard talking about finishing her career.

Where does Jordan Larson live?

Although Jordan is a very famous American volleyball player, she has never played for American professional volleyball clubs. Her first club was Vaqueras de Bayamón in Puerto Rico. She joined the club in 2009 and relocated from the US. She still lives in the US between the volleyball seasons, but most of her time she spends overseas.

Between 2010 and 2014 she also played for the Dynamo Kazan team in Russia. This is quite a usual thing for a top volleyball player to participate in two leagues at the same time. The thing is that the leagues in different countries take place at different times. And when there is off-season time in one country, top players can play in some other country. Though, Jordan never used this opportunity and played in one team at a time.

Her next team was Eczacıbaşı VitrA, hope I read this correctly. This is a Turkish volleyball club, and here Jordan Larson played from 2014 to 2019. Jordan’s American fans were hoping in 2019 that she would finally join an American club, but she chose to play for the Shanghai team moving even further away from home.

Currently, she plays for the Shanghai team and spends half of her time in China. But with her marriage, something may change. She will probably want to spend more time with her husband and will be ready to relocate to the American volleyball league if she has a chance. Also, some sources say that she may retire from sport soon because her stats started deteriorating. Experts expected her retirement right after the 2020 Olympics in Tokyo, but she still doesn’t comment much on this topic.

Who is David Hunt?

In 2022 David Hunt begins his fifth season with Pepperdine Men’s volleyball team called the Waves. He led the Waves to important titles and is now the favorite coach on the team. Hunt also spends quite a lot of time working as an assistant coach for the US national teams. In 2012 he helped to lead the women’s Olympic national team to a bronze medal in London.

David Hunt also has experience with Japan national team where he worked for two years between 2013 and 2015. He is a very well-known coach who proved his efficiency on different levels. And now he leads Pepperdine Men’s team to new wins and titles.

Interestingly, David Hunt has no proper playing experience. He played volleyball in college but then he started his way as a coach for kids and youth building up his way to big sport. We know David Hunt as a professional coach, a positive man, and now also the husband of one of the most beautiful American volleyball players.

How did Jordan and David meet?

As we’ve already said, David worked with the US national volleyball teams. In 2012 he was an assistant coach for the Olympic team at London Summer Olympics. We presume that they started their relations there but continued just dating up until 2020 when they got engaged. But it’s only a presumption because they have never commented on their relations much.

Both Jordan and David have quite reserved social media accounts with pictures from sports events. They don’t like to talk with reporters about their personal life. Actually, the wedding photos posted by Jordan were nearly the first personal pictures on her Instagram account.

Even though we can’t tell you much information about Jordan’s private life and speak to her to know if she is happy, we see in pictures that her face shines with happiness.

How much does the couple earn?

One more interesting question that is often asked by fans touches salaries. We don’t know what’s the base David Hunt’s salary, so we can’t estimate how much the coach earns. But we can say that he is one of the top coaches in US volleyball who works with national teams and is actually desired by many clubs. So his salary should be higher year after year.

Jordan Larson earns around $1 million of base salary in China. But it’s just a small part of her overall income. She gets bonuses for playing for the US national team. She also has an estimated net worth of $5 million. That’s not much, but you have to compare it with other women volleyball players who make much less money.

We have to face it, volleyball isn’t the most popular sport among fans, and this is what forms salaries for players. So getting $1 million of annual salary is huge for a player in this sport.

Also, we need to pay attention to endorsement deals which probably bring more money than sports prizes and salaries for top athletes. Jordan Larson signed an endorsement deal with Nike, and she also publishes numerous small ads on her social media pages.

Why is she called The Governor?

Jordan Larson is known to have the nickname The Governor. You might think it’s all because she is always the main person on the court, but the story of this nickname is much funnier. She comes from a small town in Nebraska with 1000 citizens only. And she made a huge impact on Nebraska volleyball playing for her high school and college teams. So, nearly all people in Nebraska know her very well and usually stop her at all parts of the globe to say hello. It happened so often that one of the team members came up with the nickname – The Governor.

We adore the way Jordan plays volleyball and wins her titles again and again. And we hope she will be very happy in her marriage with David Hunt.