You probably know that LeBron James is thought to be one of the best basketball players in the NBA among all active players. Some experts even say that he may be the best in history, but there are lots of fans who could argue with this idea. Our favorite women basketball player, Liz Cambage, is also in TOP-10 currently active WNBA players due to her skills and height. We decided to compare the lifestyles of these two important sportspeople.

LeBron James and Liz Cambage both achieved a lot in their career, but they are playing in completely different leagues. NBA is probably the richest basketball league in the world with the highest salaries and with nearly every professional basketball player in the world dreaming of getting to any team of the league. WNBA is highly underestimated and undervalued now, so salaries are much worse and the players aren’t as popular as NBA stars.

So, in our today’s video, we’ll look at how LeBron James' lifestyle differs from the life of Liz Cambage. 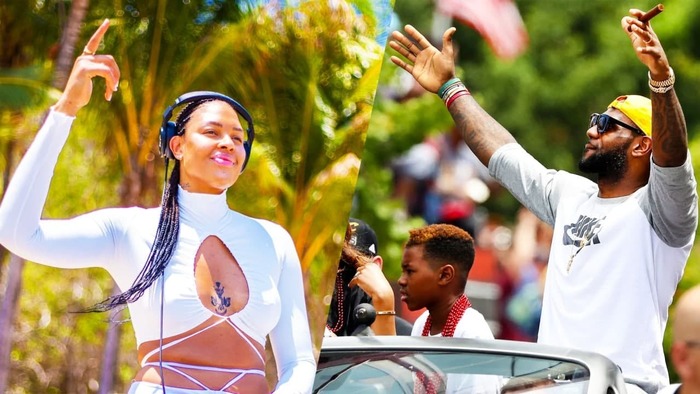 The basketball star was born in 1986 and he is now a veteran player for Los Angeles Lakers. He is widely considered to be the best player in NBA competing with Michael Jordan in the debate over the greatest basketball player ever.

LeBron is nicknamed King James and he has a tattoo saying ‘Chosen 1’. He was drafted by the NBA as number 1 at the age of 18, and he holds the record for being the youngest number 1 draft in NBA history.

Now LeBron James has three children with his wife, Savannah Brinson. He’s been married for 8 years now, but there aren’t that many facts about his family life. LeBron is highly obsessed with his health and fitness, that is why he can still compete with young NBA talents being 36.

LeBron James is 6 feet 8 inches tall, he weighs around 250 pounds. He has an extremely strict diet and very hard sports training every day.

Many times he has to lead LA Lakers to wins and he is thought to be the team leader now.

Liz was born in 1991 and she is also considered to be a veteran in the sport. But she started her career in WNBA when she was 23 because it’s not allowed to participate in WNBA drafts until you reach this age. In this part, LeBron James was much luckier – he started playing in NBA when he was 18.

Liz is 6 feet 8 inches tall, exactly the same as LeBron James, and she weighs 216 pounds, which is 34 pounds less than James. Before coming to the US in 2011 she had played in Australian college basketball leagues.

Liz is single now, she doesn’t have a husband, but she’s dating Alex Lee, the football star. She doesn’t have kids and she was never heard saying that she wanted children. But Liz is 6 years younger than LeBron, so she has plenty of time to create a full and happy family.

Liz Cambage is among the top-10 tallest women basketball players in the US. Her height brought her popularity in social networks and made her a well-known athlete in the world. Liz has played during several off-seasons in different countries like China and Australia to keep the shape and earn additional money.

If you are into basketball, you probably know that the salaries of WNBA and NBA stars are incomparable. But today we’ll try to compare them just to draw attention to slightly uneven conditions for men and women.

The top WNBA salary in the current season is $221 450 a year, and this is exactly the sum that Liz Cambage earns along with other 6 athletes who are considered to be the best players in WNBA. LeBron James has a base salary of $39.22 million a year! So, LeBron earns 177 times more than Liz, and the difference is just unbelievable.

Also, NBA players have no chance to take their time off-seasons and play in other countries. For WNBA players it’s quite a normal thing to do. Cambage may make another $400 000 to $800 000 a year from her overseas contracts. Also, Liz earns money on her endorsement deals that reportedly bring her at least 2 to 3 million dollars a year. Her social media accounts may be an additional source of income. Her Instagram account, for example, is followed by over 660 000 people. You can easily make $1 million a year with this audience.

LeBron James also earns money on endorsement deals with Nike, McDonald’s, Blaze Pizza, Mountain Dew, and also dozens of other brands. His lifetime deal with Nike is estimated to be worth $1 billion! Well, if suddenly NBA stops bringing money and all endorsement deals close, LeBron James is going to earn hundreds of millions a year with his social media accounts. His Instagram account is followed by more than 88 million people!

Liz Cambage has a net worth of $3 million, and that’s not bad if you compare it with you and me. But you better not compare it with LeBron James’ net worth that is estimated to be $500 million and it grows every single week.