Blue Origin wants to show that the company isn’t worse in terms of technology than SpaceX. The race continues, and the NS-16 mission is set to be the starting point of the new age when people will agree that Jeff Bezos isn’t only just a businessman who sells things on Amazon, but is a space exploration enthusiast who stands on one level with Elon Musk and NASA. Jeff wants to be the first man to launch a space tourist.

NS-16 mission is planned for July 2021 and it will be the first crewed mission with some passengers on board. This will be practically the first space tourism experience. Recently there was an auction and a man won the right for flying to space along with Jeff Bezos for 28 million dollars. So, now we know for sure that Jeff is going to be one of the first tourists in space himself. 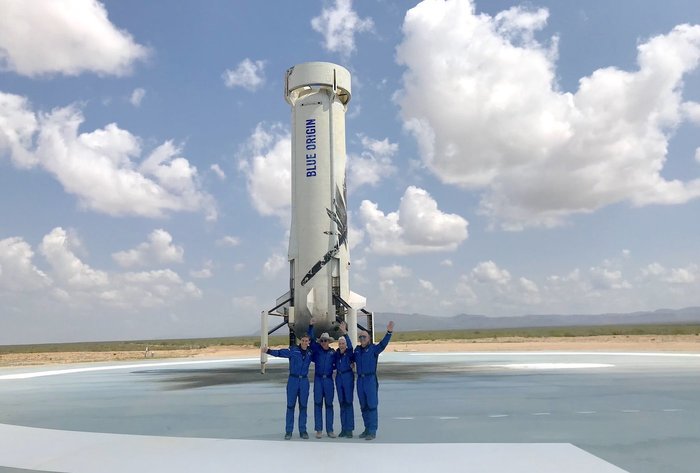 NS-15 was the fifteenth test flight and it showed that the rocket is basically ready for taking humans to the low Earth orbit and holding them there for up to 11 minutes. The NS-15 mission took the empty capsule packed with cameras to an altitude of nearly 100 kilometers and that was really cool. But the next mission is set to have people on board.

All flights of New Shepard were successful, although they have never launched spacecraft with people inside. Now they claim that more than a decade of work with the New Shepard project ensured that the rocket and capsule are absolutely safe and that they can take a tourist without any preparation to space. We doubt that it’s that safe because taking an unprepared person to 100 kilometers altitude will anyway mean a lot of risks.
But we believe that Blue Origin had good calculations and will take responsibility for the words of their authorities.

When you talk about the flight to space you can imagine an astronaut rushing towards the zero gravity zone and circling the Earth in its orbit at least a couple of times. But no, New Shepard and NS-16 mission will be very different. The overall time of being in the zero gravity zone will be around 9 minutes. The time of the flight is now thought to be 11 minutes. That takes you more to get to the work than it will take Bezos brothers and their fellow passengers to get to space.

They will take Bezos and his fellows to 62 miles altitude which is considered to be the edge between atmosphere and space. This type of flight is called suborbital and they don’t necessarily take people literally to space. By the way, no one actually knows where the space starts.

The maximum speed of the rocket is 2300 miles per hour, and that’s hard to imagine. You will be amazed to know that the orbital flights use launchers that achieve 17 000 miles per hour, and that’s not so easy to bear if you aren’t trained. After the launcher burns almost all its fuel, the passenger capsule will fall apart and continue its journey towards open space. We should remind you that Blue Origin produced the rocket that can be used multiple times, so the launcher will then return to Earth and land somewhere in a safe place. Just like Falcon 9, for example.

The passenger capsule will hover for a while in a zone that is known to be the edge between atmosphere and space. The capsule has huge windows, so astronauts and tourists will have the opportunity to observe the Earth from space. That would be a good journey for flat-earthers, we believe.

The capsule then will start falling and it will deploy the parachutes at some point to slow down to around 20 miles per hour speed before it lands.

Will it be really safe?

Well, we don’t think Bezos would risk his life. But the flight to space has always been his dream. And we can’t say that this kind of flight is absolutely safe. The huge overload will be experienced at some points of the journey, and anything can happen to a human. The capsule can be ejected from the New Shepard launcher if something goes wrong. It can still land safely even if there is trouble with one or two parachutes. Because there is a bunch of them.

But still, the risk is high. Anything may happen during a flight to space that has never been conducted before with people. Here we should remember Virgin Galactic and one of their test suborbital flights in 2014. The flight killed one of the pilots because of a huge mistake in the pilot’s actions. And that took a lot of time for Virgin Galactic to build a second generation of its plane for safer flights.

Many times during his interviews, Jeff Bezos said that he knew about the risks and he thought that the risk is worth it.

Will everything be good with Bezos? Will the NS missions continue after the NS-16 mission? We’ll soon see it.