If you are interested in military aviation, you probably know that F-15 fighter jets were originally designed by McDonnel Douglas and were the cutting-edge planes in the sphere. They set a high standard of what a fighter jet should be able to do. And the US Air Force didn’t lose a chance to get equipped with these planes. But the first flight of McDonnel Douglas F-15 Eagle was conducted nearly 50 years ago, and today these planes are very old. Even though there were some modifications and minor changes in technologies, F-15 is an extremely outdated fighter jet now.

US Air Force has been using dozens of other models after the retirement of a major part of the F-15 fleet. But today they are getting new F-15EX fighter jets produced by Boeing. You may know that McDonnel Douglas was bought by Boeing in 1996, so now all technologies belong to Boeing along with patents. This year Boeing made a new step towards the next generation of fighter jets by making an extremely technological and revolutionary fighter jet for the US Air Force. The F-15EX will be one of the most up-to-date machines on duty and will ensure dominance in the air. Or maybe it won’t? Let’s look at the specs of the plane and see if it’s better than competitors from all over the world. 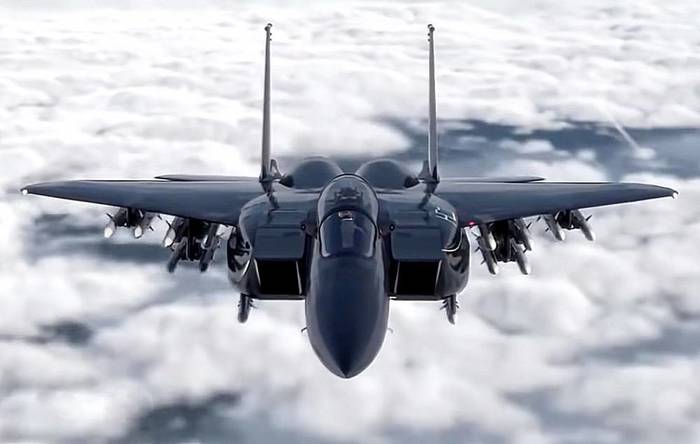 Why a fourth-generation fighter jet?

Boeing hasn’t been very successful in its decisions for the last 3 or 4 years. They made a lot of mistakes in commercial aviation with their new MAX series 737 planes and they failed to sell lots of other models. Will the F-15EX be a success for the company? Experts doubt it. Even the Air Force authorities were surprised to know that they are getting a fourth-generation fighter jet and they now have the contract for 144 planes. While there is F-35 – a stealth fighter jet that can do better than any kind of a previous generation plane.

But we shouldn’t look at the deal with suspicion. Boeing has been upgrading and selling F-15 fighter jets all the time since the company acquired McDonnell Douglas. Kuwait and South Korea are known to have a lot of new versions of the plane. But the F-15EX was specially prepared for the US Air Force to substitute aging F-15 C and F-15 D fighters. The government had a choice to upgrade them or to buy newer versions, and they decided to buy new jets. The aging planes will be decommissioned.

There were concerns that many countries got upgraded versions of F-15, so the US Air Force now may get quite old planes that won’t be capable of bringing the country any closer to air dominance in potential wars. But Boeing says that they have introduced completely new technologies and made the classic fighter jet much more technological and advanced. So the point is to get economical and maneuverable jets that cost less than F-35 and can complete a big range of missions in the air. And if you look at F-15EX from this angle, the purchase seems to be quite good.

What are the new technologies?

Well, the new Eagles are far away from their ancestors. The producer ensured that the planes have stronger airframes, up-to-date processors, new cutting-edge radars, and avionics systems. The flight control systems resemble those used in fifth-generation jets. Also, they added special systems to make the plane safer for pilots. There is a threat detecting system that will warn the pilot of any dangerous situations. New cockpit displays and faster electronics will offer new ways to control the plane. The new survivability system will decrease the number of fatal accidents by employing new technologies including AI systems to prevent crashes or to eject the pilot.

Boeing says that they will sell to the US Air Force a unique version of the F-15EX fighter jet that they won’t sell to any other country. It means that if overtime two F-15EX jets will bump into each other on the battlefield, the US Air Force plane will have more advantages.

Probably, the biggest advantage of the F-15EX is its payload. It can carry over 30 000 pounds of weapons, both air-to-air and air-to-ground. You can compare it to F-35 that can only carry 5700 pounds. So, the strategy is that stealth fighters can enter the needed areas and identify targets while F-15EX will destroy them with powerful weapons. The experts compared the two jets by saying that the F-35 sees the enemy coming while the F-15 takes them down.

The fighter jet uses F110 engines produced by GE. There are two of them, each generating a thrust of 29 000 pounds. Here comes the most interesting thing. Thanks to advanced engine technologies and relatively light weight, the jet can fly at the speed of Mach 2.5 (it means 2.5 times faster than the speed of sound). That’s approximately 3100 km/h or 1920 mph. It makes the F-15EX the fastest fighter jet in the world. F-35 jets show 30% lower speeds.

The range of the fighter jet is 1380 miles and that helps it strike deep targets. The F-15EX jet is operated by a single pilot.

Weapons and potential use

Armies all around the world want to have F-15EX in their fleets because these machines are crazy when it comes to weapons. They can launch hypersonic weapons up to 22 feet long, they can carry a huge amount of missiles. Boeing ensured that the jets are able of carrying and launching air-to-air and air-to-ground missiles of different kinds.

The F-15EX can carry up to six AIM-9X missiles on its wings. These are air-to-air missiles that use infrared technologies to detect enemy aircraft and follow them. This is a short-range weapon, but not the only one used in F-15EX.

It can also carry AMRAAM missiles that are capable of detecting and following enemy aircraft at distances well beyond visual range. Up to 12 AMRAAM missiles can be placed under the wings of the jet.

The F-15EX can carry up to 16 StormBreaker weapons. These can see through fog and rain, and they will travel up to 45 miles before getting directly to the point they were sent to. StormBreaker is one of the most advanced types of air-to-ground weapons that can be launched from a fighter jet.

These three types of weapons complement each other and create huge power for the fighter jet. Now you can see why the US government decided to change older F-15 jets and buy new models.

The set of technologies aboard is astonishing as for a fourth-generation fighter jet. Actually, the newer stealth jets can form efficient cooperation with Eagle II aircraft. The stealth planes will detect the points for missiles and right after that, the Eagles will strike those points to demolish the enemy’s locations. If you look at it like that, the idea to buy 144 F-15EX Eagle II jets doesn’t feel bad anymore.

But of course, the fighters are autonomous and they can detect the points for sending their missiles by themselves without any help from fifth-generation planes. They have advanced radars that were developed by Raytheon Technologies. The most important thing is that they will see enemy aircraft much sooner than the enemy will detect F-15EX in the air. High speeds will help to get away faster than the enemy could use any defense system. If you look at F-15 history, you’ll see a great fact: these planes nearly never lose in combats, and this is their biggest advantage.

With all the modern avionics and other technologies, a classic jet will be a great purchase for any army. The US Air Force is glad to have unique versions of the jets just in case they will have any kinds of conflicts with other countries buying the Eagle II jets. And one more thing: these planes are quite cheap to make. The F-15EX jet costs around $87.7 million to buy and it can fly up to 20 000 hours with the cost of $29 000 an hour. With approximately the same purchase price, F-35 will cost $36 000 per hour to fly.