3D-printing technologies are being implemented in our lives so fast that soon we’ll see them as a totally simple way to print something. And while the majority of us still don’t know how this technology actually works, others actively use it for producing goods and things in all possible spheres. We won’t speak today about those jewelry things made with 3D printers or those toys they start making now with 3D-printing technology. Today we’ll look at houses that can be built with the help of 3D printers. Surprised?

Well, the technology of printing houses is not that new. Concrete 3D printers have been used for some years and they are now part of big constructions. These robotized pieces of equipment can build a house with little help from a human. They need us to program them and once the programming is done, they work day and night asking for no coffee breaks, days off, or vacations. That is probably why building companies started loving this technology as soon as it arrived on the market and became available. 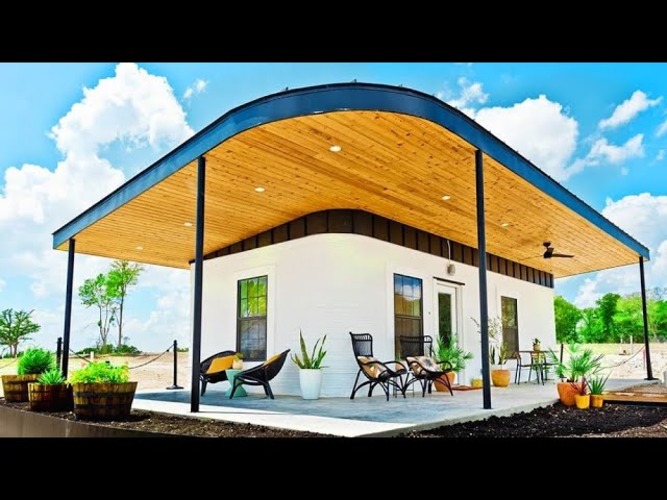 But there have been concerns that the houses built by 3D printers may cost a fortune. We decided to investigate what kind of houses 3D printers are able to build and how much these houses are going to cost.

3D printing in the building has been used for years

The first generation of 3D printers for construction needs was introduced in 2000. But the printers were very big and not so technologically good, so in 10 years developers introduced the second generation. Up until now, these printers have been mainly used for building private houses, big mansions, and villas. They were also used in the construction of a 5-level building and proved to be really efficient for high constructions. But skyscrapers are still built with older technologies due to some concerns about control of the process.

Though, the company called Cazza is going to erect the world’s first skyscraper using 3D-printing technologies. They will use so-called crane printing with little to no human control. The ideas of building huge constructions with the help of this technology keep appearing all over the world. One of the reasons is simple: the 3D printers become affordable for companies and they allow some form of automatization that reduces costs for construction works.

But today’s task is to see whether you can build a house that will only cost one thousand dollars. And yeah, that’s going to be hard to count.

You aren’t supposed to build a house that costs a thousand and expect it to be a huge villa, so we’re going to talk about those tiny little houses called smart homes. And you’ll be surprised, but some projects may cost 1 000 dollars or somewhere near that sum.

Italian production company WASP (short for World’s Advanced Saving Project) has introduced a $1000 house built with the help of a 3D printer. This is a tiny smart house called Gaia that has only one room and can accommodate one person. But bear in mind that the house has a modular construction, so you may order 3 or 4 modules built at one spot to have 3 or 4 rooms available. The house is aimed at saving ecology, so it’s made of mud, rice husks, and straw. These materials form kind of concrete that is used by a 3D printer to create a house. The house has passive solar heating, natural ventilation. For their first project, the WASP company chose a spot near Bologna, Italy, where they built a bunch of such houses. Each one took 10 days to build at a total cost of $1035. In addition to being really cheap and easy to build, this house is eco-friendly and it uses natural materials along with some wastes from rice cultivation.

There is another project to build a 3D-printed house from the soil at a low cost. Institute of Advanced Architecture of Catalonia in Spain has shown its 3D printer for building affordable houses from the soil at a special show. The project is now seeking investments to build social homes for the underprivileged all over Europe. The idea is quite the same as with WASP – they are going to build tiny smart houses using all-natural materials and making them as eco-friendly as possible.

Of course, you should count the project price and the printer’s price if you want to build such a house on your own. In these calculations, only the materials and salaries of construction workers were counted.

3D-printing is being used for private houses

If we forget about the $1000 cap, there are many marvelous projects of 3D-printed houses that may cost as little as $8000 or $10 000 to build including all the costs. We found some companies that are offering 3D-printed houses and calculated how much it may cost to build such a house or to order it in the companies.

Apis Cor is a Russian company with its main office in Boston, US. The company offers ready-to-use houses built-in 10-30 days with the help of 3D-printing technology. The average price for the house is $10 000. The house will only have one room, but there is also a hall and a bathroom inside. The projects may be different but any changes will result in a bigger price. We should remember that this price includes the commercial revenues of the company. Initial costs for the building aren’t disclosed.

Icon company, based in Texas, is specialized in building small smart houses that are very comfortable for living. A small family can be accommodated in a simple house that only costs around $10 000 to build. The company is working towards bringing the price down to $4000 for a single house by implying more robotic technologies and fewer workers in construction work. The result of cooperation with a non-profit organization New Story is a whole neighborhood of such smart houses in Tabasco, Mexico. People could get their own houses in the city and start new life thanks to the cheap building technology.

Winsun Company based in Shanghai, China, made a big breakthrough in 3D-printed houses technology in 2014. The company managed to build 10 houses a day with an average cost per one building of about $4800. These houses have a square and rectangular shape of their base and that’s a huge advantage. You may have noticed that the majority of 3D-printed houses are kind of circles because that makes the technology cheaper and quicker. But Chinese engineers didn’t know that back in 2014 and they were building really cheap houses. For now, the company still works with 3D-printing technologies, but it builds much more expensive objects like Dubai Winsun Office Building which is thought to be the most advanced 3D-printed building in the world.

Recently there was news that a couple from Amsterdam moved in Europe’s first house that had been 3D printed in Eindhoven. This is a two-bedroom bungalow and it can be used for everyday living throughout the year. Elize Lutz and Harrie Dekkers got the key from their new house that is the first officially registered 3D-printed home in Europe. The company admits that they needed 120 hours to construct the house. The new owners are renting out the house paying 800 euros a month which is not that expensive for the Netherlands.

There are still some drawbacks to 3D-printed houses

The companies that are now building houses using 3D-printing technologies outline some main drawbacks of the sphere. The main disadvantage is that they are going to experience a lack of materials. 3D printers can use only a certain range of materials and none of them is really cheap. Some special models are being developed now and they can use cheaper materials, but it’s hard to scale construction works with these machines.
Building size will be always restricted by the printer’s maximum size. Big printers are very expensive. If you want to build a huge building, you’ll need to have some workers who’ll move the printer all the time. This creates new problems of bigger costs and chances for mistakes in humans’ work.

Now, there is one more drawback that you have to know. To register officially the new 3D-printed house and to ensure that all engineering systems such as electricity and plumbing will work correctly is very hard. Every country will have its own rules for registering a new house. But everywhere you are going to face troubles. The controlling organizations are going to ask too many questions and provide too many checks before allowing you to use electricity for example.

And still, we see a lot of prospects for 3D-printed houses in the future. Companies are interested in letting machines build their projects, so this technology certainly has a bright future. But today the printers are still too expensive.