Cirrus has always known how to satisfy the needs of General Aviation aircraft buyers. The American company has been producing the two most successful planes in the industry across the world. Today we’ll talk about Cirrus SR22, will tell you about its main specs and roles, different options, and advantages over other aircraft of the kind. Also, we’ll try to find some common features between Cirrus SR22 and Airbus A380. Do you think there aren’t any?

The company from Duluth, Minnesota has been producing and selling the SR22 model since 2001. Two years later it offered Cirrus SR20 with a shorter wing, less fuel in its tanks. Of course, the newer model became more successful as it provided a bigger range, a more powerful engine, and higher fuel efficiency. But both models are still in production and we will even talk about their prices on the market.

Let’s dive into details and find out some really cool things about Cirrus SR22. 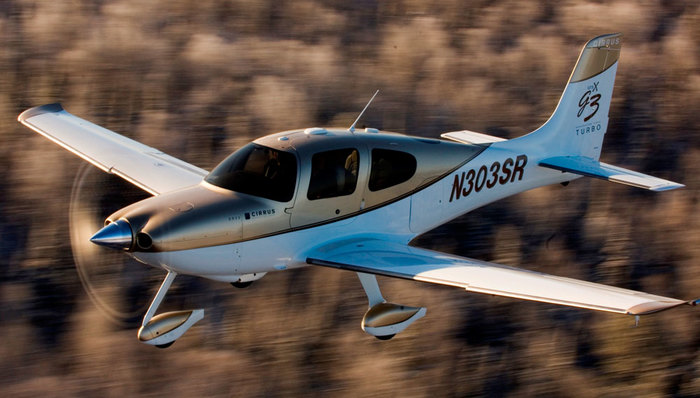 All generations look the same – stability is everything in aviation

Actually, there haven’t been many changes in the plane’s modification since the start of its production. But in 2004 the company introduced SR22 Generation 2 with a slightly changed fuselage shape. In 2007 Generation 3 appeared with little changes to wing structure and different landing gear. Then in 2013, the producer introduced Generation 5 (a strange thing – they forgot to make Generation 4). Better brakes were installed, the plane’s gross weight became bigger with no visible changes to specs and flight comfort. Generation 6 arrived in 2017 with major changes to avionics and with an upgraded lighting system.

Throughout the years, Cirrus used a single-engine type – a 310-horsepower motor. The Continental-produced piston motor was slightly modernized, but it actually still has the same construction. It’s very reliable and can work for thousands of hours with no trouble. Which is very important for a plane. But in 2006 they introduced a turbo version with a special kit that you could install to your plane to make it faster. In 2010 a new version of SR22T appeared on the market with a turbocharged engine showing 315 horsepower. Not a lot of added power actually made the version rare in the sky.

SR22 specs are perfect for a plane of its kind

We’ll look at the specs of the Generation 6 model because there were major changes in avionics and cabin construction that affected the specification slightly.

Cirrus SR22 shows an engine power of 310 horsepower and a cruise speed of 183 knots. That’s around 210 mph. Its maximum operating altitude is 17 500 feet, a little over 5 000 meters. But turbocharged versions showed higher altitudes of 7500 meters. The maximum range is something incredible – if you use 55% of the power, you can go 1345 miles of around 2160 km without refilling the fuel tanks. Its maximum useful load is 1328 pounds. You’ll need approximately 330 meters of runway to take off and up to 350 meters to land.

But one of the most important things to mention here is fuel consumption. Cirrus SR22 is a one-motor aircraft with a V6 engine consuming petrol. It will burn 17.8 gallons of fuel per 1 hour of flight with 75% of the power. Usually, the cruise speed of 210 miles is achieved with 65% of power which shortens the fuel consumption to an average of 14 gallons per hour. That would make 14.3 miles per gallon if you try to convert it to more understandable figures for people who aren’t into aviation much. The new Ford F-150 truck will show 12 mpg at the combined cycle if you take a 5-liter motor version.

The aircraft is something like a luxurious car if you compare it to a road vehicle market. You get leather seats, built-in oxygen, keyless entry, air conditioning system, Bose headphones for pilot and passenger, smartphone connection, LED lighting all over the body. UV-protected windows will be useful when flying. FIKI system is aimed at allowing you to fly throughout the seasons. It protects the plane from ice. The wings in Generation 6 are specially shaped. These cuffed wings were developed by NASA and they offer maximum fuel economy and comfort.

You probably know that Cirrus SR22 is called “the plane with the parachute”. And yeah, it has a huge parachute that is integrated into the middle part of the fuselage. If the engine stops or the plane gets into a crash, the parachute automatically opens and ensures a safe landing. This helped Cirrus to make their planes officially the safest in the industry.

Since 2001, around 6200 planes were sold, and it’s the record for the class. Light composite planes of General Aviation are usually selling much worse, but Cirrus managed to change that.

Instead of any type of steering wheel, Cirrus SR22 has side yokes from both sides. The aircraft still can fly with one pilot only, the second pilot is optional. The side yokes maximize the space in the cabin and allow the pilot to comfortably control the plane. The autopilot system is really intuitively understandable and easy to use. The Autopilot system allows vertical and lateral navigation just like in modern huge commercial aircraft.

The technologies for avionics are presented by Garmin. This is the company that supplies nearly all private jets with avionics technologies and cabin gadgets. Dual flight displays make it easier to navigate and control the plane. It’s virtually the first aircraft of the kind to provide climate control options along with a heater and air conditioning system.

The cabin can welcome 5 people, two of them will be lucky enough to fly on the front seats and be pilots. Cirrus SR22 is very quiet in comparison with other composite planes of General Aviation. You may talk with your passengers and they will hear you.

How is it connected to the Airbus A380?

That’s a weird thing, but these planes are somehow connected. You may know that airbus also uses kind of joysticks for their planes instead of a helm like in Boeing aircraft. So if a commercial pilot who works on Airbus will want to buy a private plane, he will probably choose Cirrus SR22 because he will get basically the same way to control the plane. You may now be sitting and laughing, but more facts connect Cirrus and Airbus.

You may know one of the richest Airlines in the world – Emirates. They use a whole lot of Airbus A380 planes in their fleet for long-haul flights to Europe and the US. They also have their own flight academy where they teach new pilots. And recently they acquired a new Cirrus SR22 to train pilots. That sounds really weird, but the pilots will first train on Cirrus small plain and then work on Airbus A380 planes in international flights.

They are going to buy 22 Cirrus SR22 planes for training their cadets. And that’s really unusual.

What are the prices?

The most affordable version of a new Cirrus SR22 costs $671 900. That may include international delivery. But some additional options will raise the price to a little over $850 000. For a turbocharged version with a full package of addons, you’ll pay nearly $1 million.

Up until 2014 Cirrus SR22 wasn’t as good in terms of safety. 147 accidents were registered in the US only with 122 fatalities. But since 2011 Cirrus started working hard to introduce new safety systems and improve the work of a built-in parachute. So in 2014, there were only 3 fatal cases and 12 parachute landings. The number of fatalities dropped to 0.42 per 100 000 flight hours that is the lowest in the industry. So now we can say that Cirrus SR22 is the safest plane in its class.

The last register of parachute landings was in 2018 and it showed 79 times in history when Cirrus successfully landed with a parachute saving lives of 163 people. That’s what Cirrus is all about.