If you take the single-engine private jets industry, you’ll be surprised to know that Cirrus was one of the first companies to enter the market with its Cirrus Vision Jet SF50 approximately a decade ago. It was the slowest private jet you could buy at that time, but it still has been very successful and actually gave start to the big industry niche of highly economical, very efficient, and quite comfortable single-engine superlight jets.

Now we know that Piper, Aerocomp, Diamond, Flaris, Eclipse, and some other companies produce such aircraft and they really sell well. At the time when Cirrus Vision Jet appeared on the market Cessna and Honda were laughing loudly comparing its specs with their highly successful twin-motor light jets, but the time has changed since then, and buyers started choosing more efficient models. That’s why Cirrus has found its clientele and is now a successful producer of probably the lightest mass-produced plane with a jet engine in the world.

Right now there are slightly more than 250 jets produced by Cirrus that are actively used by their owners. And today we’ll try to reveal the main pros and cons of the model. 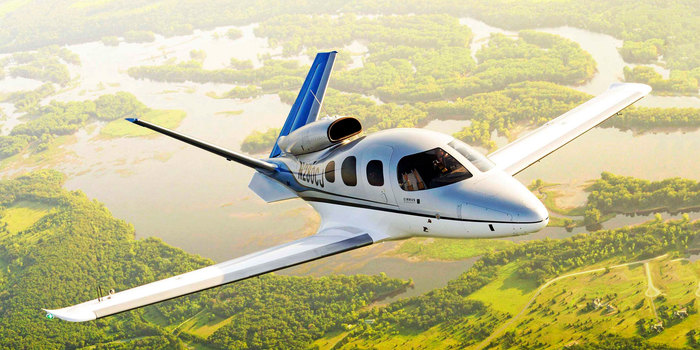 The jet is extremely light, the weight is only 1681 kg. And that’s the main advantage of the jet because you aren’t likely to burn a lot of fuel while flying this machine. The maximum takeoff weight is 6000 pounds or over 2700 kg.

5 adults including two pilots and 2 children can be accommodated in the newer generation of the Cirrus Vision Jet. The interior is full of luxurious materials that are ready to serve for years without a need for change or refit.

The length of the plane is just 30.9 feet, the height is 10.9 feet and the wingspan is 38.7 feet. The cabin width is 5.1 feet. You can’t walk in the cabin, it’s only slightly higher than 4 feet. But still, it feels very comfortable to fly. You may expect that flying on Cirrus Vision Jet will bring standard problems of small planes like shaking all the time and hearing the impossible noise of the engine that is mounted on the backside of the fuselage, not on wings. But the Vision Jet offers maximum comfort among the small jets of the class. The Williams turbofan engine is really quiet and efficient. It doesn’t produce much vibration, so you feel quite good in the cabin during the flight.

The cruising speed is slightly over 300 knots or 560 kilometers per hour. The original range figure is around 1000 miles if you choose to cruise at 300 knots. But if you choose the better option of a more economical cruising speed of 242 knots, the plane will be able to show the range of 1265 miles or slightly more than 2000 kilometers. Consumption is the most important thing. Cruising at the most economical speed you’ll get 47 gallons per hour consumption which is one of the best features in the class.

As soon as you get aboard Cirrus Vision Jet, you understand that the plane is not the worst among private jets. Its cabin is designed to resemble a luxurious sport car design. The third row of seats seems to be really cramped, but the producers say fairly that two seats there were designed for kids only. Although the plane seems to be extremely small, it gives quite a lot of space for pilots and passengers on the second row of seats. And you actually feel like in a solid business jet.

There is an entertainment display that can be connected to your mobile device and be a good thing for both work and leisure time activities. There are USB ports and power plugs all over the cabin so that every passenger could charge the device or connect to the entertainment system onboard.

In the reviews, people often say about the huge panoramic windows. They allow you to see all the landscapes when the plane takes off or lands. Climate control is an advantageous feature that can be set for a wash row of seats separately. As in any jet, the cabin is pressurized, so you get less noise, higher-flying altitudes, better comfort.

Cirrus is known to be the only company to produce mass models of planes with parachutes for safety measures. And yes, Cirrus Vision Jet has a parachute system that will land the aircraft safely even if there are some problems with the equipment. The system is called CAPS and it’s been tested thoroughly on many Cirrus planes.

The aircraft is equipped with Garmin avionics and it has a unique feature that is called ‘Safe Return’. If a pilot isn’t able to control the plane for any reason, one of the passengers will need to push the ‘Safe Return’ button. After that Garmin avionics will find the nearest airport and will safely land the plane without the pilot. The avionics also provides a lot of automated features to control the jet, so it’s easier to fly than the majority of jets of the kind.

How much is Cirrus Vision Jet?

Prices for new generation vision jet start at $1.96 million and it is the most affordable private jet in the world. Prices for closest competitors start at $3 to 5 million. But the maximum price of Cirrus jet with all additional technologies will be near $2.5 million.