Seattle is the city where the sport is an extremely important part of social life. There are quite a lot of sports venues and arenas where big teams of NBA, WNBA, NHL, and other leagues train and play their home games. But there is one arena that has a lot of attention in the press now. It’s the Climate Pledge Arena. If you aren’t familiar with recent changes in Seattle, you might think it’s some new stadium. But actually, this is an old Seattle Center Coliseum that is now being rebuilt so that it could be more environmentally friendly and could host more sports teams and more matches.

Today we’ll have a quick look at the history of the project, then we’ll outline the main changes that are being made now. Also, we’ll try to estimate the costs and tell you a little about what the arena is going to be like in the nearest future. 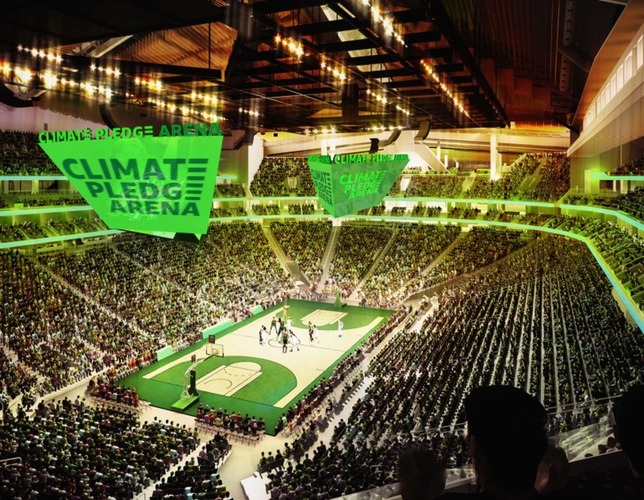 How did it happen to be the Climate Pledge?

Climate Pledge Arena opened in the mid-twentieth century as the Center Coliseum. It was reconstructed from the Seattle Center complex that originally served as the place for one of the world’s biggest fairs in 1962 with 10 million people attending the fair for almost a year. After that Seattle authorities bought the venue and constructed Coliseum – a multi-purpose stadium to host sporting events, performances, and concerts. In 1993 it was rebuilt again and named KeyArena after KeyCorp that invested money in reconstruction. Since then, it was the home of numerous basketball teams and other sports clubs in Seattle.

In 2016 Oak View Group won the contract with Seattle Council to rebuild the old stadium and turn it into the most eco-friendly construction among all sports venues in the world. That’s why Amazon decided to name the stadium Climate Pledge Arena after buying the naming rights. They claim to use zero single-use plastic materials, produce zero emissions during construction, and use only environmentally friendly materials for building the stadium.

In 2016 the city authorities of Seattle started seeking investors and contractors who could rebuild the stadium to make it NBA and NHL-ready venue. Oak View Group competed with Seattle Partners and won the race to have a half-billion contract. The price of the construction has doubled since then and it’s not the final cost.

In 2018 the WNBA Seattle Storm team played their last season on KeyArena and the construction works started. In December 2020 they installed a new name officially proven that the stadium will be called Climate Pledge Arena.

There are different claims about the name. Some people agree that it may draw attention to a very important topic of climate change. But others think that Amazon was just manipulating facts when naming the arena that way. Amazon now claims that this is the most eco-friendly stadium of all, but the company bought rights to name the stadium in 2020 only, two years after the construction works began. How could they know that the arena was that eco-friendly? We hope there will be more details about the stadium construction and we will be able to answer that question.

Well, at least now they try to make it really good for the environment. We believe they won’t sell drinks in plastic cups.

The stadium is going to be ready to host 2021-2022 NHL games as well as 2022 NBA games. For hockey it will host 17 100 fans, for basketball, the number is 18 100 fans. The capacity may change with the possibility to sell tickets with no seats booked, for example to fan-zones during concerts.

What have they done to make it ‘green’?

The eco-friendly arena is set to be the first stadium in the world with officially certified zero carbon emissions. The certification will be conducted by International Living Future Institute.

They banned all types of fossil fuel consumption and turned all equipment into electricity. They installed solar panels where it was possible and claim to use 100% renewable energy sources. The arena and Kraken NHL team are set to get rid of all single-use plastic by 2024.

They even introduced the new system of getting water for hockey ice-rink. There are special cisterns that harvest water from the roof when it rains. After that, the water will be used for ice-rink when preparing for the next NHL game. They also install water stations that can fill your bottle with clean water for drinking.

The arena will even recycle the trash that it will have in massive amounts after each NHL and WNBA game.

And we believe that’s enough facts to call the stadium eco-friendly. We only hope that it will be a good example for other stadiums that are being built or reconstructed now all over the world.

It all started with a $560 million contract with Oak View Group, but in 2018 the price was estimated to be $840 million as a minimum. After that, there were numerous recalculations, so the final price now is $1.15 billion and we are quite sure that it will be even bigger.

That’s quite natural that Seattle citizens as well as many journalists started asking why the price was so big. American Airlines center cost $551 million, Staples Center cost $523 million, Verizon Center cost $376 million, even the scandalous Madison Square Gardens cost $867 million in its final version. How come they spend over 1 billion dollars to build a stadium that will host up to 20 000 people only?

There is one problem with Climate Pledge Arena, and it’s the roof. When the city authority announced that they wanted to rebuild the stadium, they also had one key point in the contract: the contractors couldn’t change the design of the iconic roof of KeyArena. And this was the major trouble for all contractors. They needed to make the arena bigger, enlarge its capacity and provide more space without touching its roof.

Oak View Group keeps saying that the lowering of the arena bowl for 15 feet was the main problem and it required a lot of time and money. But the result is that they are building basically a new stadium under the old roof.

How will they use the new arena?

The main tenant will be the Seattle Kraken NHL team. It hopes to host the home games of the 2021-2022 NHL season in this stadium. Actually, Kraken is the team that will be associated with the Climate Pledge Arena. They have no choice but to show great results after the city budget spent over a billion dollars to build a great place for them to play.

Also, the Seattle Storm of WNBA is going to be the second tenant in the 2022 WNBA season. They had been using the KeyArena up until it was closed for reconstruction, and they are going to use the basketball court again. Seattle Storm won the WNBA finals in 2018 here, right before the KeyArena was closed. And they usually showed wonderful results playing here.

Also, there will be one more tenant of the Women Flat Track Derby Championship. It’s Rat City Roller Derby. And this sport is also gaining popularity now.

Multi-purpose stadiums allow replanning the playground quickly so that two types of different sports events may take place within one day. For changing the court amenities, they will probably need only one or two hours. That’s a little more complicated with hockey, as you need the ice and some protective screens for fans. But with the help of modern technologies, it’s possible to host basketball and hockey games at one stadium without a week break between the events.

But sport isn’t the main source of earning money with the new stadium. Now, you can already buy tickets for the first concerts at Seattle’s renovated stadium. Concerts and performances will take place several times a month. And for these events, the arena will be also reshaped so that it could host more people.