Orcas are the cutest big creatures in the oceans. This is what you might think when looking at these charming animals in some beautiful National Geographic picture. That’s probably why we usually call them KILLER WHALES! They are ruthless killers, professional hunters, and probably the most bloodthirsty predators in the sea. Did you know that moose are among their most delicious food types? Wait… Moose… Are they swimming in the sea? How on Earth do these orcas catch moose? Ok, let’s find out more about these cute pirates. 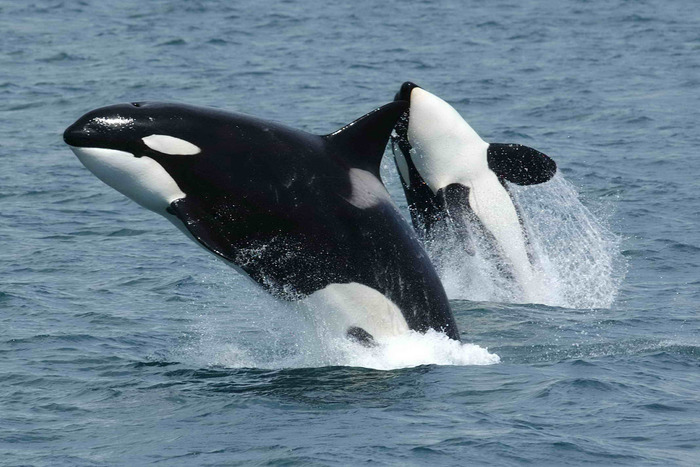 Historically there were no cases of orcas attacking human beings. Well, at least no one registered such events. There are two major thoughts about it: orcas don’t like humans because they are too tough to chew, or orcas eat people secretly so that no one could see them. We hope, it’s the first option.

Actually, there was one case in Norway when people saw an orca chasing a surfer. But when the animal was a couple of meters away from the human, it suddenly changed its mind and swam away. Maybe the surfer was very much like a seal or something? We don’t know.

But the fact is that orcas don’t eat people. And there are even excursions where you can dive with orcas in the open sea. What a great idea – to swim around a pod of animals known to have the cute name – killer whales!

What do orcas usually eat?

Orcas are very much like sharks. They don’t care much if the thing is edible, they want to bite it and find out. But still, orcas are known to be the gourmet of the sea. Did you know that they could kill a shark just to eat its liver? Well, a shark’s liver is full of vitamins, so it’s quite the same as you going to a drugstore to buy a pack of vitamins for your kid.

Orcas were originally called whale killers by the first sailors. They often saw pods of orcas hunting small whales. There are registered cases when orcas successfully hunted big whales, even blue whales. When in a pod, they aren’t afraid of anything. A couple of orcas start disorienting the whale and try to get it down underwater. Then another orca just blocks the breathing hole on the whale’s back. Unbelievable!

Seals for killer whales are something like candies for you. They even seem to smile when they see a seal. Moreover, they can play the game which we would call seal ball. It’s something like volleyball but the ball is a seal. The rules are simple – whoever throws up the seal higher from the water, wins. We believe seals aren’t happy and they never win in this game.

Also, killer whales can eat fish and squids, sea birds, and even animals who come too close to the shore. Well, a balanced diet is important for an orca, as you see.

How do they manage to eat moose?!

The only thing left to answer is how these orcas manage to catch moose. You have to look at the zoology book and find out that moose are excellent swimmers. They can swim at quite solid speed as for half-ton animals and they can even dive. Nature thought it would be a good idea – to give moose an additional chance to survive in winter by eating water plants.

Orcas eat pretty much anything that swims in the sea, and they just couldn’t pass by a 500-kilogram moose trying to eat a water plant.

Orcas are top apex predators in their food chain. It means that not one single creature in the world will want to eat an orca. So they feel quite good and organize a balanced diet consisting of the proper amount of proteins, fats, and carbs.