We’ve already told you about the EHang company. This is the brand that is going to be the first business ever to create an air city taxi service. The company originates from China, but now it works all over the world, including the United Arab Emirates, the US, Canada, Europe. EHang 216 is one of the most prospective passenger drones on the market.

But it’s not the only air taxi concept over there. Today we’ll compare EHang 2016 with the Volocopter passenger drone. The Volocopter company is based in Germany. It was founded in 2011 and it has been working hard to design its prototypes of future air taxis. Let’s see if Volocopter drones can beat one of the most famous air taxi prototypes by EHang. 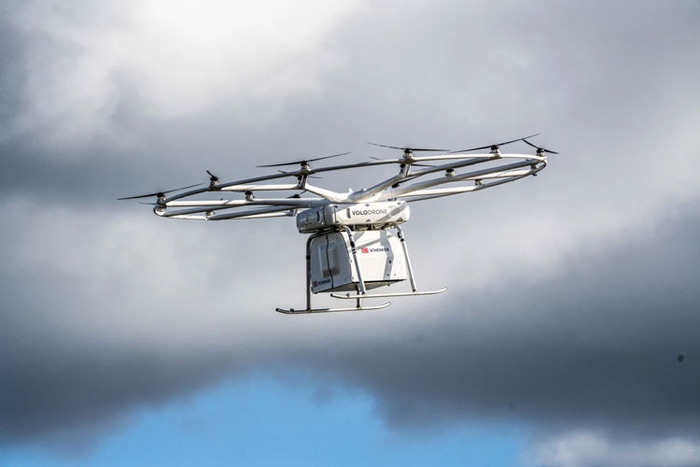 This drone has been engineered to carry 2 people, and it was designed to suit air taxi needs. The maximum payload of 220 kilograms seems to be quite enough for the tasks. The EHang 216 offers a little over 20 miles or 35 kilometers range. The air taxi can reach the speed of 130 kilometers per hour or 75 miles per hour.

It’s an AAV – autonomous aerial vehicle. The takeoff, steering, and landing processes are fully automated, so there is no need for a pilot. You just say or type the address of your destination, and the AAV takes you there by air without any traffic jams. Also, it’s an eVTOL – electric vertical takeoff and landing vehicle. The vertical takeoff and landing opportunities ensure that you won’t need to find a runway. It can start flying from any spot.

EHang has already tested the AAVs in 10 countries.

Volocopter Company works under several projects. Today we’ll talk about Volocity – the air city taxi concept. It has a lot in common with EHang 216. The Volocity can also take 2 people onboard, it supports vertical takeoff and landing. The idea is actually the same – 18 rotors ensure movement. The flight is controlled autonomously by a computer, so it’s also an AAV.

The maximum payload is 200 kilograms, which is a little worse than with EHang. The Volocity offers the same range of 35 kilometers or around 20 miles. The maximum speed is 110 kilometers per hour or less than 70 miles per hour. The Volocity is a little slower than EHang. Both passenger drones are quite limited in terms of range. But both have advanced safety technologies and were certified by numerous organizations in terms of safety.

Volocopter’s air taxi has been successfully tested in the airport of Helsinki and also in the center of Singapore. But we should admit that EHang 216 has more test flights and more certification opportunities in different countries.

Interestingly, both companies say that they were the first businesses to build and fly passenger drones of this kind.

When will the air taxi be launched?

Although many companies now say that they are going to launch the air taxi services in a year or two, this is just the marketing trick to make the stock prices go up and make some money. For launching the commercial air taxi service, you will need a pile of certification documents, and they are extremely hard to get. It’s something like registering and certifying a new plane model for commercial airlines. In the US, FAA will certify the aircraft for air taxi services. In Europe, you will need to get an EASA certification. Each country will complete hundreds of checks before it will potentially allow any company to fly AAVs with passengers inside.

We predict that the first AAV will get all the needed certifications in one or two countries not sooner than in 2025. Experts say that it could be the United Arab Emirates. This country always wants to be the first in terms of technology, so Dubai air taxis may be the first in the world. And if this happens, then EHang 216 will be the first commercial AAV to start the service as an air taxi. Because Dubai city authorities have signed contracts with EHang company to produce the air taxi prototype and build all needed infrastructure.

What else can EHang 216 and Volocity copter do?

EHang 216 provides a couple of additional versions. It can be a cargo drone that is capable of autonomous deliveries. Also, the EHang company showed pictures of the 216 firefighter drone. The main idea is that the drone is autonomous and it has quite a high service ceiling, so it can be used to deal with fires in skyscrapers. There are certainly more ways to use the drone, but the German company was more creative than the Chinese one.

Volocopter has quite a lot of projects, and we are pretty sure that some of them aren’t revealed yet to hide the new ideas from competitors. Volocity is a project that features air taxis. Then there is a project called Voloconnect. That’s a Volocity version with wings that has a range of 60 miles and a top speed of 155 miles per hour. There’s also the Volodrone concept – the cargo drone that can lift and deliver autonomously up to 200 kilograms of cargo.

The company also offers Voloport vision – a kind of airport for urban air taxis. They also have one project called the VoloIQ system. Basically, this is the brain that operates all eVTOLs of the company. If they make it available on the market, any company can use the technology to adapt it to its own needs.

Today’s comparison hasn’t made it clear which company is the most prospective. We hope we’ll see it soon when one of them announces the first commercial flight of their air taxis.