Lusail Iconic Stadium is a megaproject that is going to open soon in Qatar. If you are keen on football, you probably know that Qatar will host the 2022 FIFA World Cup, or better say, its final part. And the new stadium in Lusail is the diamond of this event. The stadium will host the World Cup Final in 2022 and it will be the most wanted venue for all people who love football and want to experience the real live emotion of presence at one of the most important events in football history.

Qatar is a country that loves to make everything the best of its kind. No need to remind you that Qatar airlines are thought to be the most comfortable and also the safest airline in the world. The company has the newest planes and best service you don’t even expect to get in air journeys. The country is really rich because of its huge oil deposits. But now it’s determined to open new directions of development knowing about the upcoming oil crisis. And sport is probably one of the key points in Qatar's future plans. The country is building hundreds of sports objects among which Lusail Iconic Stadium seems to be the most incredible and probably the most expensive, too. Let’s find out more about the project. 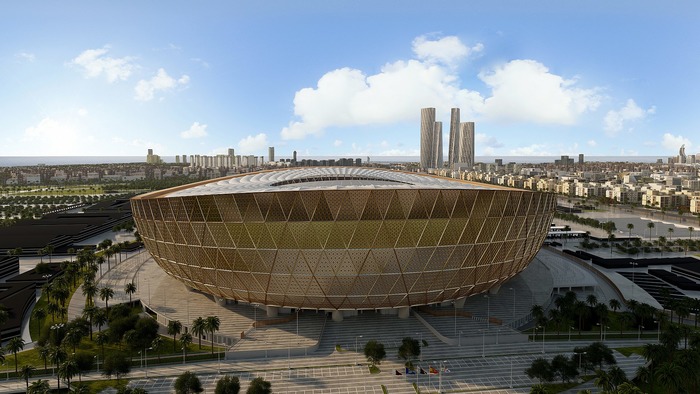 Qatar has strong relations with developed European countries and the authorities often use British or German companies to build something huge and expensive. Lusail Stadium was designed by the British company Foster + Partners. Also, the specific sports parts of the project were designed by MANICA Architecture, the company specializing in buildings for sports events. They are using HBK Contracting Company and China Railway Construction Corporation as main contractors.

The design is really futuristic. The stadium is nearly circular in shape, it has numerous bridges that connect the inner part of the construction with huge parking lots. The shape itself was inspired by a traditional food bowl used widely in the Middle East’s golden age. Others though say that the shape resembles some kind of traditional Asian boat. The saddle-form roof looks so unusual from above, and it will protect fans from demolishing sunbeams. It’s extremely hot in Qatar during summer, so players and fans will need protection from the sun. So the central section of the roof can be retracted, they will open it for evening matches or for winter games. But the majority of playing time in the stadium will be covered.

The area around Lusail Iconic Stadium is going to be replanned soon after opening. They will make sure that thousands of cars can park near the stadium. Beautiful parks will appear here right after the venue will be ready to host football matches. And we can’t even imagine how beautiful this place will be in just a couple of months.

The stadium will have a capacity of 80 000 people. There will be numerous VIP rooms and lounges for the rich. The stadium is said to have more facilities for rich clients than any other football stadium in the world.

The majority of flights from and to Qatar are operated by Hamad International Airport in Doha, the capital of Qatar. So you may wonder why they are building the huge stadium, not in their main city. But the reason is that Lusail is actually a couple of miles away from Doha. It’s a relatively small and calm city that needs some more investment to develop in the future. The stadium will be actually the main infrastructure object in the city, so it is thought to bring more investments in the future to Lusail.

The city is brand new and it is planned to be the FIFA World Cup's main city in Qatar in 2022. Nearly all buildings here are new, the city has been replanned and rebuilt so that all fans from all over the world could find cozy places to accommodate. The city is going to gain more infrastructure objects by 2022. They are planning to launch a special subway line to Lusail stadium from Doha. A lot of entertainment objects are also being planned.

Lusail city probably has some other tasks. It seems weird to invest billions in the stadium and city infrastructure basically building the new big city and aiming for one event only. FIFA World Cup will finish and Lusail Iconic Stadium has a chance to become the tourist attraction of Qatar. The big city of Lusail will be the tourist magnet because it’s really one of the first big planned cities that has a big chance to be fully finished and start working in a year. The total price of this megaproject is impossible to predict.

The price of the Iconic Stadium is hard to estimate. The construction is still in progress and you know, the price may vary a lot depending on economic situations, inflation, material prices. Now the total cost is estimated to be around $767 million, but experts believe it will be much closer to $1 billion. The price may seem incredibly big, but if we compare it with some other megaprojects in the sports sphere, it’s not that huge.

We could name a couple of stadiums that are similar to Lusail Iconic in terms of costs. Emirates Stadium in London cost $0.7 billion back in 2006. But its capacity is slightly bigger than 60 000 people. Estadio Nacional in Brazil cost $0.8 billion in 2013. But if we look at a more expensive stadium, there is a dozen of them in the world. For example, Mercedes-Benz Stadium in Atlanta cost $1.5 billion, but this stadium is appropriate for both association football and American football. Wembley Stadium in London costs $1.5 billion, too, and it’s thought to be one of the world’s most expensive stadiums. The construction works finished in 2007 and it can accommodate up to 90 000 people.

As you see, Lusail Iconic Stadium is not the most expensive but we would say it doesn’t lose in comparison with the richest venues in the world. Yes, it’s a little smaller than Wembley, but it’s way more modern. Qatar authorities had plenty of space to put all the infrastructure objects around the stadium so it will be really comfortable for fans.

They are building the stadium and the big city to accommodate 200 to 400 thousand people from scratch. Basically, they are doing it in the worst area you could imagine – in a sandy desert under extreme heat. But they are still spending less money than American and European companies.

Qatar isn’t the strongest football nation in the world, but this game is quite popular here. Local authorities hope that building new stadiums and creating new wonderful venues for the sport will boost citizens’ interest in football and in sport in general. They hope to have more children play football and open their talents.

But of course, you can’t expect the huge 80 000-seat stadium in the Middle East to earn money just by being the place for playing soccer. They are going to use the venue for organizing huge concerts, festivals, and world contests. They are going to prepare the stadium for new types of sport. There will be a shopping center with virtual shopping where you can easily try on some Qatar national team T-shirts virtually before buying them.

They are going to introduce virtual reality or holographic football players with who you can take selfies all around the corridors of the stadium. The advanced app-controlled system allows them to communicate with every visitor. For example, you won’t need to stay in a long line for some food. Just order it on your smartphone and it will be delivered right to your seat in the stadium.

Will the Lusail Iconic Stadium join those expensive constructions that were built to host important events and then abandoned forever? We don’t think so. The highly technological and really beautiful stadium can be a good reason for visiting Qatar in the future.