If you are into sailing yachts, you’ve probably heard about the Sailing Yacht A project. This is a superyacht built by Nobiskrug shipyard in Germany. The vessel is one of a kind, you won’t find another yacht like this in the world. It reportedly cost $600 million back in 2015 and it was the most complicated project in the sailing yacht building industry.

Nobiskrug couldn’t produce all the parts of the superyacht without contractors from all over the world. The company partnered with numerous European and American businesses to provide a unique sail-supported yacht that is extremely big, absolutely unique, and incredibly expensive. Sailing Yacht A belongs to a Russian billionaire, Andrey Melnichenko.

Nobiskrug announced the new project in 2015 and delivered the yacht in 2017. Right after it left the Nobiskrug’s shipyard in Kiel, Germany, the boat was named the boundary-pushing superyacht by Boat International. During final tests, the yacht crossed the Baltic Sea with nearly empty fuel tanks using mainly wind power.

But let’s cope with emotions and try to give all the details we know about the superyacht. 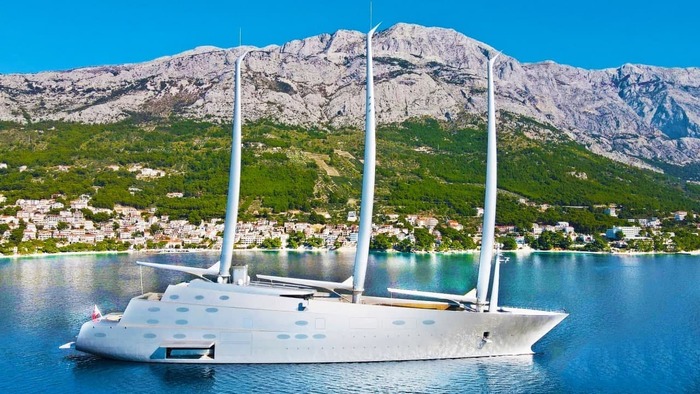 The exterior design by Doelker + Voges company appears to be the strangest thing we’ve ever seen in the yachting industry. The vessel looks really weird with its back part being much more massive than the front. But when you look at the picture of it, the emotions aren’t even close to those when you bump into the yacht docked somewhere. It’s absolutely huge and it looks like a military ship. Being very moderate and unusual in terms of design, the boat makes you think twice before you make any opinion about it.

12 558 tons of gross tonnage and 142 meters or 468 feet of length amaze. The overall height including the masts is 100 meters. So there are many bridges in the world that will have to open for letting this yacht pass them. The draft of 8 meters doesn’t seem very big, but still, it limits the yacht from traveling in some areas. Once the yacht was spotted near San Francisco, and when it was passing by the Golden Gate Bridge, it had only 20 feet of spare space above the masts.

There are 8 decks on the boat. If you think you could try and sail it, you are wrong. You’ll need 54 crew to do it.

Philippe Stark was in charge of both interior and exterior design, and he did the job well. The boat has been featured in many industry magazines, on many websites. But until now there are a lot of secrets about the yacht. You aren’t supposed to board it unless you are a good friend of the owner. And we assume that Andrey Melnichenko doesn’t have many good friends to share his travels on the yacht.

The hull is made of steel, but there is one unique thing. There is an observation pod in the keel with 12-inch-thick glass. You aren’t supposed to see such luxury in any other sailing yacht in the world. The observation pod allows guests to feel like in a submarine and observe marine life.

The yacht has a maximum speed of 21 knots and it can cruise at 16 knots. But these figures are connected with its motor part. The two MTU diesel engines 3600 kW each are supported by two extremely efficient electric motors forming one of the most powerful hybrid powerplants ever installed on yachts. The pure diesel-electric range is around 10 000 kilometers or 6 000 miles.

But of course, you are supposed to use sails most of the time. Although, it’s very hard and it requires a lot of people.

Three carbon fiber sails were produced by an American company Doyle Sailmakers. The important thing is that the sails are fully automated, so they are very safe to use. Crew can quickly change the position of the sails so that the yacht always stands in the right position and doesn’t sway much ensuring maximum comfort for the owner and guests. The three-mast sailing rig helps in achieving higher speed or it can autonomously move the vessel with the engines off.

The three sails of the Sailing Yacht A can roughly cover a football field. Up to 20 guests can travel with the owner and enjoy the round-the-world trips with virtually no limitations. Nearly 3 crew per guest and nearly $25 million costs per guest for building the yacht – are quite normal figures in the superyacht world.

Great tenders to enjoy your trip

Sailing trips may be quite boring if the weather is good enough, so the producer decided to add some tenders so that the owner and his guests didn’t feel sad for choosing exactly this yacht and paying a huge amount of money for it.

First, there is a helipad. And if we aren’t mistaken, it’s the only sailboat in the world featuring a helipad. We aren’t sure if a big commercial helicopter can land there, but it seems that the size of the helicopter pad is big enough for this.

Also, there is a submarine docked in the yacht. If you aren’t glad about observing the underwater world from the observation pod in the keel, then you better get ready to feel some pressure changes in the submarine. This is quite a small additional vessel that is powered by a diesel engine and can bring wonderful experience of being the sea explorer.

There are also four other tenders that are designed exactly the way the boat is designed. They all look other-worldly if we could say so.

SYA-1 is the main tender to pay attention to. This is a speedboat that can cruise at 53 knots and it can take you ashore in a very short time.

SYA-2 is a tender for guests. 9 people can be accommodated in a spacious room while the boat is operated by 2 crew sitting outside.

SYA-3 is just like the previous option, but it is open and it’s very good for sunny weather trips. There is a 360-degree glass capsule allowing guests to have astonishing views while the boat takes them to the needed place.

SYA-4 is the boat that is used for practical tasks. Yachting experts once named it a pickup truck of the A’s fleet. The boat is used for getting loads from shore to the anchored yacht and for bringing people to the shore if needed.

Destinations of the Sailing Yacht A

As you understand, the owner loves to boast with his extremely huge and unique yacht. Usually, it’s seen in the Mediterranean. But it has been spotted all over the world.

It’s been seen near the Isle of Man and the pictures were amazing. The futuristic boat looks like an extraterrestrial vessel having wonderful landscapes in the background.

In Gibraltar, in 2021, the yacht A was spotted along with the world’s largest superyacht Azzam. Lucky people could have seen the two largest boats of their kind docked near each other and forming an unbelievable bond of technologies.

The yacht is often seen near Sicily and near Croatia shores. Maybe, the owner loves spending vacations there.

It’s been spotted in the US, in the Atlantic Ocean, in the Caribbean, and many other places.

Of course, you can’t charter the yacht. The owner uses the vessel for his own pleasure and he’s not going to give it for rent or sell it within the nearest time. Andrey Melnichenko is a billionaire and the main beneficiary of a number of companies in Russia. He makes his money in different industries and he can afford to own the yacht like A for years.

The estimated price of the project in 2015-2017 was $600 million. It’s twice more than the motor yacht of the same size would cost. And it’s quite the same as Azzam, the world’s biggest superyacht, cost at the time of its production.