Harmony of the Seas is a really huge Royal Caribbean cruise ship. With its gross tonnage of unbelievable 227 000 tons, the ship is the second largest passenger vessel in the world surpassed only by its younger sister, Symphony of the Seas. The vessel is an Oasis-class cruise ship that was built between 2012 and 2016 by STX France. Its maiden voyage was in May 2016. And the total building cost was estimated at $1.35 billion which is quite amazing.

Today we’ll be making the tour on the Harmony of the Seas and will investigate major entertainments, deck plans, restaurants, bars, and also accommodation opportunities. The cruise ship has a lot of features that will surprise you even if you have experience with ocean cruises. This vessel is a masterpiece! 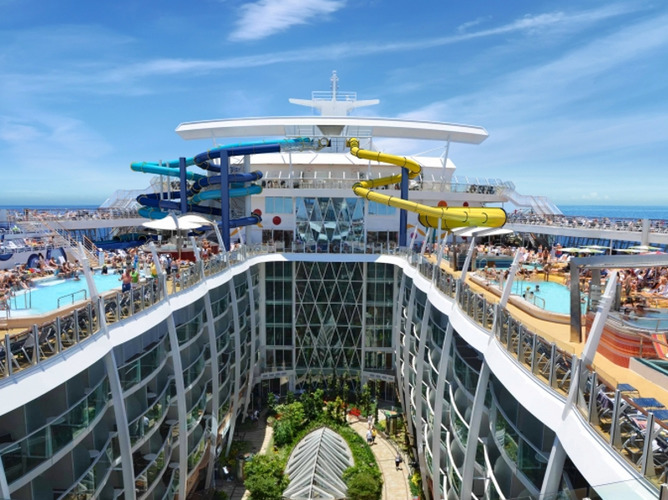 Look inside the Harmony of the Seas

There are 17 decks on the ship, two of them are devoted to technical needs and are given to the crew. By the way, 2300 crew are needed to ensure wonderful relaxation for every guest onboard. The maximum capacity of the ship is 6780 guests! There are 2747 staterooms of different types and classes, many of them are family rooms that can accommodate a lot of people with exquisite comfort.

There are staterooms in nearly any deck but the upper ones, so we won’t pay much attention to accommodation now. Instead, we’ll tell you about the entertainment that you can get on the ship. Let’s start with deck 3 where you will find the Royal Theatre and Main Dining Room. Then there are a couple of bars and Casino Royale on the fourth deck. Go up one level and you’ll find the SPA center, running track, Aquatheatre, and also many shops, pizza points, and other venues on deck 5 which is the main promenade area. There are no staterooms, just entertainment.

Then, moving up, you’ll find more cafes and bars, rock climbing walls. Starting from deck 10 and up to deck 14, there are mainly staterooms except the kids’ avenue on deck 14. Starting with deck 15 you again get the bunch of entertainments that are all included in your ticket price. There are a Solarium zone, pools, whirlpools, sport court, and many other things to investigate. Move up and you’ll find open-air bars, a huge restaurant, a zip line, and two separate Flowrider attractions. Also, the Ultimate Abyss Slide will be the place to visit if you have teenage kids or if you are ready to experience some adrenaline boost.

On the two upper decks, there are the most luxurious suites and some small bars open to the guests in those suites.

As you see, there are many things to do at Harmony of the Seas, and you won’t be bored between the shores.

What are the destinations of Harmony of the Seas?

Royal Caribbean names over 300 possible destinations for this ship. Among the most popular there are the Bahamas, Caribbean, Bermuda, Cococay. Also, the ship was spotted multiple times in Europe, mainly in Greece and Italy. Harmony of the Seas is sometimes sent to Alaska cruises – it can come very close to glaciers and it can bring you to places where there are usually many whales. Also, Hawaii, West Coast, Canada, and New England are the destinations of the cruise ship. It’s sometimes sent to Asia and Australia, New Zealand and so on.

If you wish to experience the cruise on Harmony of the Seas, basically all the world is open for you.

Staterooms and suites onboard

The majority of staterooms on the ship are sea-view and balcony rooms. In the first type, you get a sea view through quite a big window, in the second option, you also get a balcony or terrace which is quite good for traveling long distances. There are also interior rooms that don’t have any windows and are usually the cheapest ones. But some of them have a so-called virtual balcony which is actually a huge TV screen showing the sea views.

If you have slightly more money, you can choose suites that are bigger and more comfortable than staterooms. Suites are suitable for more than 2 people, but when you book one, pay attention to the kind of suite. The most expensive will be the luxurious Royal Suite with two levels, much space, and great interior design. There are only several rooms of the class on the ship.

Harmony of the Seas specs and features

This is a 362-meter or 1188-foot vessel. It’s absolutely enormous – like a 17-story building on the water. There are 4 Wartsilla engines each having 19 300 horsepower. The cruising speed is 22 knots which aren’t that bad for one of the biggest machines at sea. The maximum speed is about 25 knots.

The boat uses a special system of producing bubbles all over the hull in its underwater part. These bubbles reduce the water resistance and help the ship use the fuel 7 to 9 percent more efficiently. This reduces the fuel consumption and adds to the cruising speed of the ship. The system also reduces propeller noise.

Harmony of the Seas is clearly the city on the water, and it’s built to ensure that every guest feels maximum comfort during the vacation.