The French company, Dassault can be called one of the leaders in aviation today. The main type of plane this company produces is a private jet. Its series of Falcon jets are extremely popular in the world of business. Today we’ll be talking about Dassault Falcon 8x which is a more advanced version of the Falcon 7x with minor changes in the body, engine work, and avionics.

Both these planes were derived from Falcon 900 – the legendary private jet. This is a large-cabin and long-range plane which is actually a trijet. So it has three engines to ensure quite high speeds and optimal comfort. Also, the more engines the plane has, the safer it actually is. And here Dassault made everything possible to build the plane that will bring the best experience to its owners.

Let’s move on to know some great facts about Falcon 8x and its features! 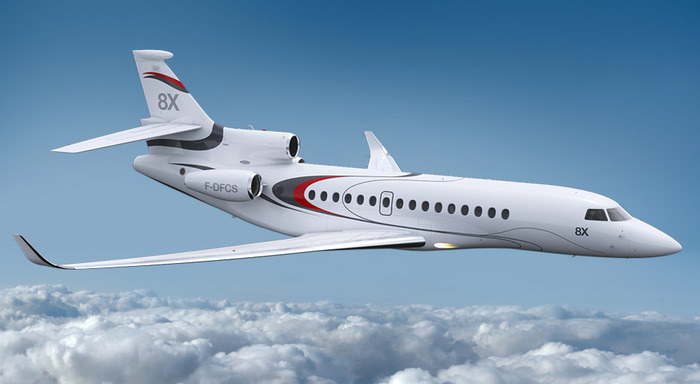 Main specs of the jet

Dassault Falcon 8x is 1.1 meters longer than the 7X model. The company improved the wing design and also changed the engine's settings to ensure that the plane is up to 20% more efficient than any other private jet in the long-range niche. The first Falcon 8x was delivered in 2016, two years later there were over 50 active jets of the model in the world.

The range of 6450 nautical miles or about 11 945 kilometers allows the jet to take you basically to any point in the world if you are located say in London. The only major spot that won’t be accessible for you without a technical stop for recharging the fuel tanks in Australia.

The three Pratt & Whitney turbofan engines provide a thrust of 29.90 kilonewtons each and they were reworked to produce much fewer emissions even compared with current aviation standards. So the jet may be called one of the most eco-friendly machines among long-range planes.

Falcon 8x may cruise at 488 knots which is around 590 mph and 950 km/h. This is huge for a private jet, so the long-distance flights won’t be that tiring for passengers.

The maximum takeoff weight is 73 000 pounds. This is close to the average figure in the niche. But the company made the wing structure lighter and this allowed to shorten the weight of the plane and to make the payload much bigger.

The plane will need an 1829-meter-long runway to take off and a 656-meter runway to land safely. The maximum payload is 4 500 pounds.

The plane will burn around 1.02 tons of aviation fuel per 1 hour of cruise flight. The first hour of flight including takeoff will require around 1.8 tons of fuel. The average cabin sound level is measured to be 47 dB. And again, this is arguably the best level of noise among long-range private jets.

The all-seeing FalconEye is used in private jets for the first time. This feature allows pilots to see everything around the runway even if the weather is extremely bad. This is the night vision tool that may work not only at night but also in foggy weather conditions. The avionics system is called EASy and it’s developed by Dassault Aviation for its private jets.

The plane is not one-pilot certified, so you will need to have two pilots, and also 1 crew member is needed to create a comfortable flight for passengers.

Cabin and main perks for owners

Dassault Falcon 8x can take 12 to 16 people onboard. The cabin has 15 windows on each side and it fills up the interior with natural light during day flights and also allows passengers to observe the beautiful areas when the plane approaches them or takes off.

Some seats can be transformed into very comfortable beds. Cabin transformation options are insane. You can make a single-person bed from your seat or you can transform all the middle parts of the cabin forming a huge bed with four seats. There are different types of cabins, the majority of them are prepared personally for buyers, so there may be couches, tables, transforming seats, and many other types of aviation furniture to ensure comfortable flights for the owner.

All materials are quite expensive and long-lasting. The interiors are usually light, so you don’t feel cramped in the Falcon 8x cabin. The spacious interior is one of the major advantages of the plane if you compare it with competitors.

The cabin length is 42.8 feet including the baggage room and also the cockpit part. The maximum headroom is 74 inches or 1.9 meters and this will suit the majority of people to stand in the plane without bending their backs. Of course, you may stand in the center of the cabin, not on the sides. The maximum width of the cabin is 92 inches which isn’t that bad.

Dassault Falcon 8x is created for long journeys. This is a very quiet, fast, and comfortable plane that is capable of taking you to nearly any part of the world without the need to spend hours in airports on the way to buy some fuel. The price for the fully equipped plane is around 60 million dollars, and this is the only trouble of the plane because nearly all competitors are much cheaper.