Learjet 60 is the legendary private jet that was produced between 1993 and 2012. For now, there are a little over 400 planes in service, and this jet has proven to be one of the safest and most reliable planes in the industry. This was the first plane introduced by the brand after it was acquired by the Canadian Bombardier company. And it was a breakthrough in private aviation.

Learjet 60 is a mid-size cabin and medium-range jet, so it belongs to the most popular category of jets. It shows wonderful efficiency if we compare the jet with other planes produced in the early 1990s. The plane also looks great and offers a wonderful cabin for its rich passengers. And today we are going to tell you everything we know about this machine. 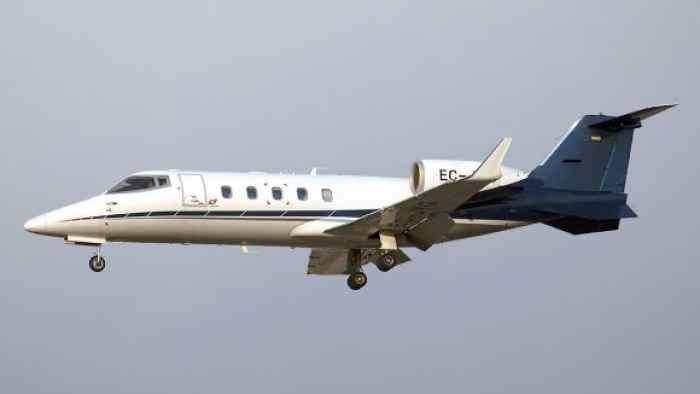 When preparing Learjet 60, the company experienced financial troubles. They badly needed a good product that would cover the needs of many potential customers. So they basically took everything good from their old Learjet 55 and added many more wonderful things to make the new plane close to ideal.

The company made major improvements for aerodynamics and invented special winglets called ogive winglets. These help to economize fuel and achieve smoother flight. It’s worth knowing that Learjet 60 could climb to 41 000 feet in 18.5 minutes. Even for the most modern private jets of the same size, it’s really fast.

This was also the last Learjet plane that used the original wing structure invented by Bill Lear and actually adapted from the French military plane, FFA P-16.

Learjet 60 in its original model was produced until 2007 when the company introduced Learjet 60XR with basically the same specs, but slight changes in avionics and cabin features.

Specs and technical side of the plane

The total capacity of Learjet 60 is 8 passengers which is quite a lot for a mid-size cabin plane. It requires 2 pilots for operation. The length of the plane is slightly more than 58 feet. Its empty weight is over 14 000 pounds or around 6600 kilograms with a payload of around 9000 pounds. The jet is powered by two turbofan engines – Pratt & Whitney 305A that produce 20 kilonewtons of thrust each.

Producers state three cruising options for the plane. The economical cruise is 421 knots which is around 484 mph. The fast cruise is 454 knots and the max cruise is 466 knots, and this is quite good for a small plane even if it was produced today. The range is 2773 miles or 4463 kilometers.

The avionics was quite advanced for 1993, and it was changed much in 2007 with the XR version. The flight deck of the original Learjet 60 version looks quite old-fashioned now, but it still gives great functions and flight control opportunities, and this is the main task for avionics systems.

What’s inside the Learjet 60?

If you are a passenger in a private jet, you won’t be interested much in how many kilonewtons the engines produce. You will be more interested in how comfortable the cabin is. And here Learjet 60 has a lot of surprises.

There are 5 windows on each side, and they are quite big, so the cabin seems to be spacious and bright thanks to natural light. There could be different interior plans, but usually, you will see 7 main seats in the cabin and one additional seat. The main zone consists of 4 seats located face-to-face to each other on both sides. Between them, there are comfortable tables to have a meal during your flight or to work with your computer.

There are a couple of luggage rooms that are accessible from the outside of the plane. They are spacious and will allow passengers to place a lot of suitcases and other luggage with no problems.

The interior in the XR version was changed a little, but the plan remained the same.

Also, there were special versions of the jet, like air ambulance with a specially prepared place for a patient.

Learjet 60 is one of the safest planes in the industry with the lowest rates of accidents happening during flights. The majority of accidents have happened with the jet during landings. The landing gear has quite an old construction, and this causes some mistakes of the pilots when using it. Of course, an experienced pilot will never make the mistake, so Learjet 60 usually lands with no problems.

The only serious accident happened in 2008 in Columbia, South California. The plane was crashed during takeoff because of the greatly underinflated tire and pilots’ mistakes. In the crash, two passengers and two crew were killed while two other passengers survived with numerous injuries. The Blink-182 drummer, Travis Barker, and DJ AM survived the crash.

There were no other major accidents with the plane that would bring to death or severe injuries of the passengers and crew.

If you want to own the Learjet 60, you should know that the estimated costs to maintain the plane and buy fuel as well as to pay salary to the crew will be around $1.2 million a year if the plane is in the air for 200 hours a year.

As we’ve told you earlier, Learjet 60 hasn’t been in production since 2012, so you can’t buy a new private jet of this model. But the prices on the market of used jets are quite good. The average price of the plane is $1 000 000 if we talk about earlier built models and around $1.8 million for planes built from 2000 to 2007. The used XR version will cost around $3.5 million.