Diana Taurasi is a famous basketball player for Phoenix Mercury in WNBA. She has won the main title of the league 3 times and she is not going to stop. Diana was born in 1982, and now she is one of the oldest players in the WNBA. Many famous and successful women basketball players retire much earlier and keep working with their teams as coaches, managers, and assistants. But Diana is an eager player, and everything she actually wants is to go on that court and kick some asses.

Diana is one of the most devoted players in the WNBA – she’s been playing for Phoenix Mercury since 2004. Actually, this team drafted her back in 2004 during the WNBA draft and she has been playing all her life for this team. 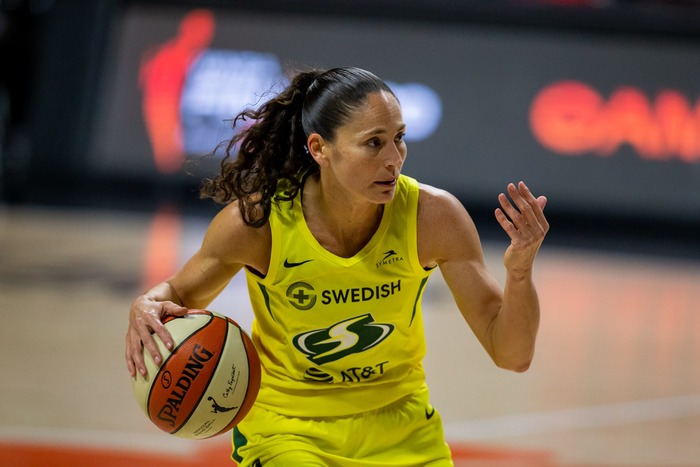 10 times Taurasi was invited to WNBA All-Star matches. In 2021 she was included in the list of top 25 players in the WNBA of all times.

Diana Taurasi started her way to bright basketball future career in her high school in 2000. Los Angeles Times even named her as the best high school basketball player in 2000. The same year she started playing for UConn at the University of Connecticut. You may know that the UConn team has presented dozens of wonderful basketball starts to WNBA, and Diana Taurasi is one of the brightest personalities among them. Her college career was extremely successful, so when it came to her WNBA draft, Diana wasn’t hesitating whether she should have taken part in the draft. She was selected first overall by Phoenix Mercury in 2004.

Diana Taurasi mainly plays guard, but sometimes she also needed to play forward as there were much shorter players in her team. She is 6 feet or 183 centimeters tall, and that’s the average height for the WNBA. We can’t consider she is a tall basketball player, but she is a tall girl compared with an average woman in America.

Taurasi set many records in WNBA earning 25.3 average points per season in 2006 and scoring 121 three-pointers during a single season. In 2006 she scored 741 points during one season.

In 2017 Taurasi became the first-ever WNBA player to score 7000 points in all official games of the league. Next year she made 8000 points. But in 2019 a series of injuries and a back surgery hold her out of the court for the whole season. She only appeared in 6 matches. Experts thought she would finish her career, but in 2020 she reappeared on the court and players 19 of 22 matches with Phoenix Mercury during the season. In February 2021 Diana re-signed the contract with the Mercury for another 2 years.

Diana Taurasi is known for her overseas career. The off-season brakes were used to play in different countries to get extra experience and earn an extra salary. Diana has played for Dynamo Moscow, Spartak Moscow, Fenerbahce Istanbul, Galatasaray, UMMC Ekaterinburg.

As for personal life, Diana Taurasi is an open lesbian. In 2017 she married her former teammate, Penny Taylor who is the Director of Player Development in Phoenix Mercury. In 2018 she gave birth to their son, Leo Michael Taurasi-Taylor. Diana has never been too open about her private life, so little is known about her family.

She is widely known as White Mamba. This is the nickname that was given to her by Black Mamba himself – Cobe Briant. Diana Taurasi is sometimes considered to be the greatest player in WNBA. But we would say she has strong competition on the court. Although, she is one of the greatest players for sure. Even being in her late 30s, Diana still scores up to 20 points per game on average and shows passion for basketball.

According to her salaries, Diana is one of the top paid players in the league with about $220 000 yearly cash. This isn’t considered high if you compare the salary with top NBA players, but in women's basketball, it’s basically the salary cap. Her contracts in Russia and Turkey are said to be much more generous. The overseas teams paid her more than $1 million of base salary with additional bonuses and perks. Her net worth is still quite low as for a professional basketball player. It’s estimated to be around $2 million.

Like many other sportspeople in the US, Diana makes money with endorsement deals. Many sports brands sign contracts with her and are ready to pay more than her yearly salary for having a short ad video with her.

We hope to see more of Diana Taurasi’s spectacular games with Phoenix Mercury and the American National Team, but we also understand that she is approaching the age that makes it quite hard to keep up the stats and compete with younger players on the court. Though Diana is a living legend of American women's basketball, and she will obviously continue working with Phoenix Mercury after her retirement as a player.