Among the superyachts, there are some vessels that stand out and can allow their owners to enter the club of the richest yacht owners in the world. Luminosity is exactly the vessel for that reason. It’s one of the longest and biggest yachts ever made. It’s actually 42nd among all yachts that are now in use in terms of length. But there are more surprises that you will want to know about the boat.

This vessel may be called the masterpiece of shipbuilding. Its owners may plan a trip all over the world because Luminosity can easily cross seas and oceans. Even bad storms won’t cause problems for the vessel. Among all superyachts, this one is one of the youngest. It was made and put into service in 2020. And there are many mysterious things about the boat. Today we are going to tell you more and let you check if these expensive boats are actually for you. 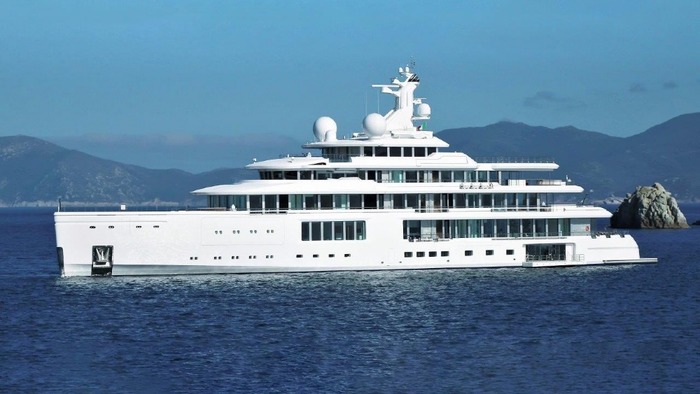 But first, you need to understand that after watching this video you may want to buy Luminosity. And there is good news for you: the yacht is now for sale and its price is negotiable. We’ll try to predict how much it may cost by looking at other yachts of the kinds and comparing features.

The superyacht Luminosity is here to tease the rich

There aren’t many rich people in the world who could afford to buy this yacht. It’s one of the most luxurious vessels on Earth and it’s really new. The yacht is 107 meters long which is 353 feet. It can accommodate 27 guests and can be a comfortable home for a round-the-Earth trip. The vessel was built in 2020 by Italian shipyard Benetti in Livorno and it’s now the candidate to be called the most technological yacht ever made.

On their website, Benetti shows that the yacht is really exclusive and there won’t be any other vessel of the kind built in the next few years. They say: LUMINOSITY IS A GIGAYACHT FOR THE 21ST CENTURY. A HYBRID OF TECHNOLOGIES AND DREAMS BUILT WITH A VISIONARY SPIRIT. And we totally agree with what they say about this masterpiece.

A quick tour over the yacht’s interior shows you that the vessel is unique and it’s actually one of a kind. It’s full of artistic decisions and expensive art objects. It’s the pure connection of technology and nature that will appeal to any person.

The walls of cabins in total have over 800 square meters of glass. Everything in the vessel is set to save nature. We’ll talk about the innovative engine system later. For now, you just need to know that the natural light and warmth are welcomed to the interior of the yacht and are played with in a very professional manner. This is the piece of art that can take you to any spot in the world.

If you are tired to walk over your huge boat, there is a glass elevator inside that services all levels of the vessel. 12 staterooms are provided for your guests. The owner’s stateroom is just amazing and it’s a 150 square meters room. The rooms are made in different interior styles and are fully equipped like the world’s best hotel suites.

If you have 27 guests floating around with you in the ocean, you will want to entertain them. And here Luminosity offers incredible options like swimming pools and pool party areas, plunge pool, gym, Hammam, massage room, bar, lounging and dining areas. To make an excursion on the yacht will take you the whole day.

Not enough? OK, here are some more surprises. The yacht was built with a deck for helicopters that is approved to serve as a landing and take-off spot for private helicopters of small and middle sizes. The helipad can be used for commercial reasons as it’s certified for that purpose.

The key feature of its interior is the idea of interactive panels. There are over 370 meters of them on the walls. When a person walks by, the huge interactive flowers open and then close again silently. We suppose that the objects on the interactive walls will be changeable and you may ask the company to create the type of interior you want to see in your future yacht. It’s all inspired by nature, and you will understand that the designers were looking at natural objects when creating the yacht’s interior.

This is not just a yacht. This is your private cruise ship that is big enough to cruise the seas and oceans and small enough to even get to some rivers. Well, the owner will be satisfied with what he or she actually gets when buying the Luminosity yacht.

The technical side is just unbelievable

Luminosity is equipped with ABB 2200 kW power engine which is actually a hybrid diesel/electricity unit. Hybrid propulsion is used at such vessels for the first time, so Benetti made a huge breakthrough and put the private yachts to the next level of environmental protection. The vessel is equipped with a set of batteries that allow 12 hours of autonomous silent operation on the anchor. After getting back to the route, these batteries will automatically recharge for the next silent stop. It means that when you are sleeping on your yacht, the diesel engine won’t disturb you. All electric equipment will be powered by a battery.

Benetti introduced a lot of revolutionary technologies with its new yacht. It sets new records in many ways and shows that there are still a lot of development opportunities for the big private yachts. They made the vessel twice more eco-friendly than its main competitors on the market. The Luminosity is focused to maximize the connection of the person and nature. And it’s not only about the eco-friendly hybrid propulsion. It’s also about its interior design, smart decisions, and very unusual features.

The top speed of the yacht is 16.5 knots. It has a range of 9200 miles at the speed of 10 knots. The new owner of Luminosity will certainly write the new story in superyachting, and now it’s a very desired purchase for many rich people in the world. Yachting is a huge part of the life of a person who buys such a yacht. So, yes, it’s very important to be sure that the technical side of the Luminosity is fully OK. For that reason, Benetti offers a 2-year warranty for all units and lifetime perks for refitting and repair along with worldwide accessible support.

The price is negotiable

The future owner of the superyacht is said to be Kutayba Alghanim, the big businessman in Kuwait. But officially it’s not proven yet, and the yacht is still available for sale in catalogs. Of course, the final price isn’t disclosed, but we have some ways to predict the price.

Let’s look at the prices of other yachts similar to Luminosity at least in some ways.

Octopus. It’s the longest yacht that is currently officially for sale. Octopus is 126 meters long. It was built in 2003 but was fully refitted in 2019. Today the price of the boat is around $275 million. The boat is also quite luxurious, but it has much older technologies than Luminosity.

Tatoosh. The yacht built by Nobiskrug in 2000 was fully refitted in 2021 and is now available for sale. The price is over $105 million, and again we have to look at old technologies. Luminosity is 20 years younger and it wasn’t owned by anyone previously.

Ace. This is another Lurssen yacht built in 2012 and refitted in 2018. It’s now for sale and it costs over $137 million. Ace is much like Luminosity in terms of luxurious design, but Luminosity is younger and new. Ace is 85 meters long which is much shorter than Luminosity.

Andromeda yacht is very much like Luminosity in terms of length and luxurious interiors. It was sold in 2017 for $165 million.

We can compare Luminosity to Solaris yacht that was recently disclosed by Lloyd Werft. The vessel is being built for Roman Abramovich and the estimated price is around $600 million. We expect Luminosity to be slightly cheaper because it’s more than 30 meters shorter. But the optimal price for Benetti’s new masterpiece will be around $450-500 million. And we are quite sure that there are some people in the world who are ready to buy the yacht at that price.

Do you have half-billion dollars? Then the yacht may become yours as soon as the seller decides on the final price!