Among freshly constructed stadiums of the world, Allegiant Stadium in Paradise, Nevada, United States is one of the most futuristic and beautiful. The stadium is located on 62 acres or 25 hectares of land and is used for both American football and soccer. The capacity for football matches is 65 000, but it can be enlarged to 72 000. For soccer matches, the capacity is a little lower – around 61 000 people.

The stadium is home to the Las Vegas Raiders of the National Football League. It also hosts matches of a college football team of the University of Nevada. The stadium is extremely beautiful, it’s designed by MANICA Architecture, the company that specializes in sports venues. And the stadium is a piece of art. Today we are going to tell you about the construction, design, price, and future plans for the stadium. 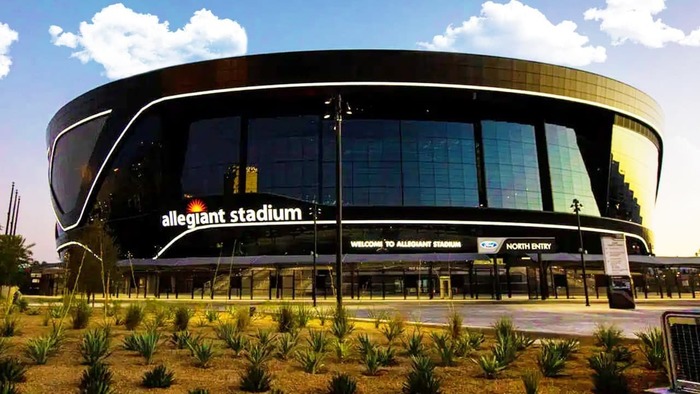 This is a domed stadium that is fully protected from all kinds of weather conditions. Before Mark Davis, the Raiders owner decided to build a stadium in Las Vegas, he also had paid for a project of a stadium in Los Angeles called Carson Stadium. The project was prepared by MANICA Architecture, and so they retained much of the design of the originally planned Carson Stadium and only slightly changed it due to area features in Las Vegas.

The design is really modern. Huge glass walls make the stadium look really compact, although it’s actually huge. The stadium is all dark-colored, which makes it very different from everything you can see in the area. So it’s clearly an attention-drawing point in Paradise.

The roof is not retractable and you might think it’s a drawback. But with extremely hot weather in Las Vegas, they would very rarely think of opening the roof. Instead of making a retractable roof, they introduced a retractable window in the front part of the stadium. Also, there is a 26-meter torch to honor Al Davis, the long-time owner of the Raiders. This torch is by the way the largest 3D-printed construction in the world.

Allegiant Stadium was built between 2017 and 2020. The construction work started in autumn, 2017. In January 2018, they started blasting the caliche rock with dynamite to create the stadium bowl. The area wasn’t the most appropriate for building a football stadium, so the preparation works needed quite a lot of time and money.

In October 2020 the works finished and the stadium was ready to be leased to the Raiders. But the pandemic and uncertainty didn’t allow Raiders to start their matches right there and then, so the first training on the new stadium was only in August 2020. Also, quite a lot of concerts at the venue didn’t happen in 2020 due to quarantine issues.

But it’s only in the middle of 2021 that the stadium started working to the full. It’s quite interesting that Mark Davis called the venue Death Star, obviously comparing it with the headquarters of Dart Wader from Star Wars. And we have to admit that in some ways the stadium really resembles the Death Star.

The price of the stadium is unbelievable. The original price was $1.8 billion! That’s huge for a stadium that can host 65 000 people. But as you understand, such projects are never built within the budget, so the final price of the venue appeared to be $1.97 billion.

The city authorities took part in financing the project. Nearly $750 million were funded by Clark County after it released municipal bonds covered by a special tax for hotel rooms in the area starting from 2017. $1.1 billion came from the Raiders. Raiders took two major loans – one from Bank of America, one more from NFL’s stadiums' loan program. Also, they earned $300 million from selling personal seat licenses, naming rights, and sponsor money. Apparently, Allegiant Air company bought the rights to name the stadium for the first 30 years starting in 2020.

How is it compared to Bernabeu?

Santiago Bernabeu will also be quite dark-colored upon finishing its current facelift. It will resemble the dome-stadium shape when the roof is closed. Although, Santiago Bernabeu won’t be constructed from scratch, and it will have more seats – over 81 000. Also, Bernabeu is funded by Real Madrid – a 575 million euros loan will be used to reconstruct the arena.

One more thing – Santiago Bernabeu hosts only soccer matches while Allegiant stadium can host both American football and soccer matches.

These stadiums are located in different parts of the world. But still, both of them represent what a huge pile of money can do to sports and society if it’s spent wisely.