We’ve already discussed the project of Climate Pledge Arena, and if you missed the video, you may watch it now. Today we’ll look at what the future main Seattle hockey and basketball stadium will look like from inside. It has a wonderful design, and you probably know that the construction workers had to save the roof which is the architectural heritage in Seattle. This made it extremely hard to enlarge the stadium and to build it basically from scratch under the same roof, but they did it!

Now the Climate Pledge Arena is nearly finished, and they are working inside. It means that soon we’ll see the first matches of Seattle Storm in WNBA and also hockey games of Seattle Kraken in NHL. Also, the arena will be used for concerts and other events which are already planned for a year or two. Will it be more comfortable for visitors? Will it be more spacious than before? Let’s see. 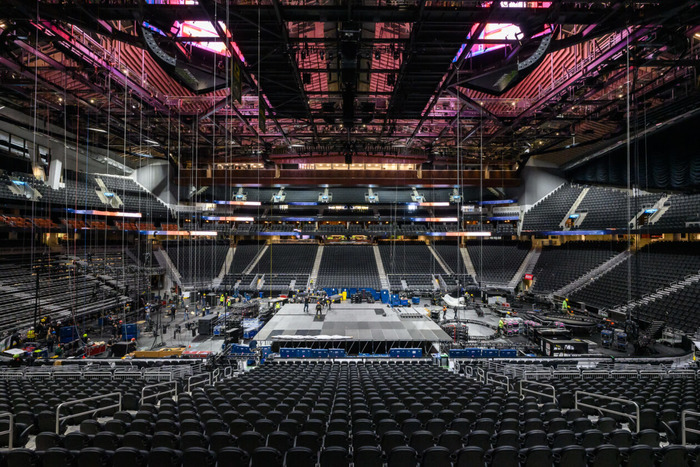 The area of the renovated stadium is 800 000 square feet which is twice bigger than the previous version of the arena. And it’s still under the same roof. How on Earth did they do it? Well, they just dug down and made it much deeper for placing more seats and more facilities in the venue. The opening is scheduled for the late autumn 2021, and the main construction works are already finished. The final sum of investments is yet to be considered, but now it’s about 1 billion dollars!

The arena will host 17 100 people for NHL matches and 18 100 fans for WNBA games. For concerts, they will sell a maximum of 17 200 tickets. Oak View Group, the company that is building the arena, says that the stadium will meet the NBA requirements, so it may be the home for one more team in Seattle in the future.

How is it possible to host both hockey and basketball?

Multi-purpose stadiums are not a rare thing in the world. We may think of AT&T Stadium in Texas or Commonwealth Stadium in Canada. These stadiums can host numerous types of sports. But you can imagine when there is a football field and say running track around it. But Climate Pledge Arena is going to host basketball and hockey matches. Is that possible?

Yes, it is. They will rearrange the arena when needed, and it will take less than half of a working day. It’s still a hard and expensive thing to do, but Seattle doesn’t have much space to build two or three arenas in the very center of the city, so they need to invent something. Before the ice-hockey matches, the arena will be prepared to have an ice rink, before the basketball games they will quickly arrange the court. For concerts and other events, there will be a module stage that will allow hosting 100 more people than in NHL games thanks to a fan zone near the stage.

This is not a unique arena, but there are quite a few other venues that are planned like this. Anyway, the main thing about this arena is that it’s going to be really environmentally friendly. Amazon bought rights to name the arena and they came up with the Climate Pledge name for starting their challenge to make their business carbon neutral until 2040.

What’s so good for the environment?

If we look inside the climate pledge arena, we’ll see that millions of dollars were spent to ensure that the venue will be environmentally friendly. They introduced a couple of really important decisions.

First: they turned everything to electricity. Climate-control equipment, cooking facilities, heating, dehumidification – these processes are powered by electricity, no fossil fuels are used in the daily life of the arena.

Second: they installed solar panels on the part of the roof that was added to enlarge the arena. Also, there is an off-site renewable energy supply complex that makes the arena 100% autonomous for not using the electricity from the city’s grid.

Third: If there are still carbon emissions in spheres like transport, the arena will compensate the money for the harm they caused to nature using environment protection funds.

Fourth: there will be no single-use plastic in the arena, not even in the fast-food section. All cups and plates will be made of paper and other degradable materials.

Fifth: rain rink system to use the rainwater for hockey ice-rinks and for other purposes. They say that Climate Pledge Arena is going to have the most environmentally friendly ice in NHL.

Sixth: they will compost and recycle their waste to achieve a 97% reduction of the usual amount of waste that is dumped by sports arenas after events.

Well, this is a really huge change in the way stadiums work, and now we see why it is called Climate Pledge Arena.

On the official website, they say that the goal of the project is to be the most progressive, responsible, and sustainable arena in the world. We tried to find other sports stadiums that are concerned with how much waste their produce, but we couldn’t. Let’s hope that the climate pledge arena will start a wonderful tradition for all new projects in the US and in the world to think about the environment and future of our planet first of all.