Dassault Aviation is known to produce the best long-range jets with few competitors on the market. Today we’ll have a look at future Dassault Falcon 10x, the largest plane in the family of private jets made by the French company. The private jet has an enormous cabin with a separate bedroom and a big dining area. This is arguably the most comfortable plane among all private jets in the world.

This aircraft is a luxurious way to travel between continents. It may easily take you to any spot in the world where there is an airport or even a shabby runway. The plane is going to be a revolutionary step to compete with Bombardier Global 7500 and Gulfstream G700. Let’s have a look at the interior of the plane, its specs and main features which we already know about. 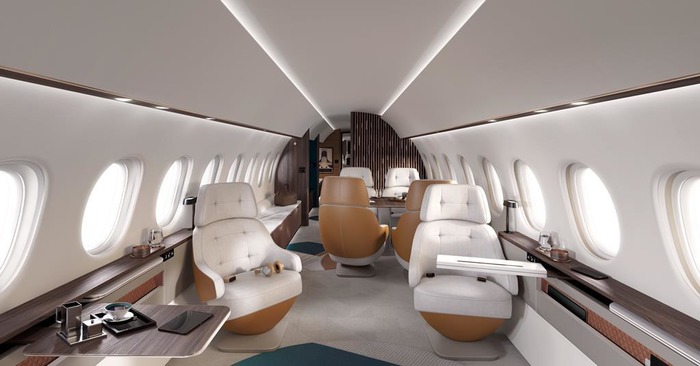 The most comfortable interior in aviation?

Dassault says in their reports and press releases that the Falcon 10x is going to deliver a level of comfort and technology unmatched by any purpose-built business jet in the world. And after looking at pictures of its interior you can confirm it. The interior looks just like the expensive hotel suite. Here you have a dining area, comfortable seats in the lounge zone, a bedroom with a big double bed and two lavatories.

The cabin is modular and can be transformed to meet your goals. With the original cabin plan, the Falcon 10x can take 8 passengers aboard along with 4 crew. But you may choose other cabin layouts and ensure that your future plane can take more passengers or give you more comfort for fewer people.

Pay attention to the seats. They are extremely comfortable and they were developed especially to fit the overall comfort of the plane. All seats are adjustable and personal. They can be turned to form the needed layout of the cabin. The tables on both sides can be folded to provide more space in the cabin.

Dassault says that the Falcon 10x has the largest and best-lit cabin in the sky. The windows are 50% larger than in Falcon 8x, and there are many of them, so you can use natural light. There are 19 windows on each side, and it’s a lot.

Also, they promise that the level of noise here will be the same as in the Falcon 8x which features the quietest cabin among all private jets.

The air in the cabin is probably cleaner than on some mountain peaks. The new air filtration system eliminates ozone and pollutants. The Falcon environmental control system ensures that the temperature is the same all around the cabin, there are no hot or cold spots. Humidity is also kept on an ideal level ensuring that the flight won’t be harmful to your skin and overall health.

This plane is just ideal for long-range flights, and this is the most important thing for buyers. You aren’t expected to get the Falcon 10x if you only need to travel within one country. This is a long-range aircraft that is going to take you all around the world as fast as the most powerful passenger planes ever made.

Specs and technologies onboard

Dassault Falcon 10x will be capable of taking you from New York to Shanghai or from Los Angeles to Sydney, for example. This plane will cover nearly all the globe for you with its range of 7 500 nautical miles or 13 890 kilometers.

The plane is equipped with two Rolls-Royce Pearl 10x engines that were specially made to fit the model’s needs. The thrust of each engine is about 80 kilonewtons. The plane can cruise at 488 to 531 knots or up to 610 mph. The service ceiling is quite high – about 51 000 feet. The plane will need a 6000-feet runway for takeoff and about 2500 feet for landing. The empty weight of the aircraft is around 61 300 pounds.

The flight control system is advanced and it offers a new level of flight comfort and safety. The avionics was changed much in comparison with Falcon 8x. Now the new aircraft by Dassault Aviation will be nearly 100% automated. The pilots’ work will be just to ensure that all systems work right and won’t cause any problems. Dassault has used a military flight control system that the company created for its fighter jets.

Falcon Eye is one more thing that will ensure the safety of the plane. It’s a special system also borrowed from a fighter jet, that allows pilots to see the runway and any kinds of obstacles on the way even if the weather is extremely bad. The Falcon Eye will allow landing at almost any condition.

Dassault Aviation experts say that the new engines and the fuselage configuration will let the plane climb swiftly over the air traffic and turbulence zones to ensure a wonderful flight experience for passengers.

Date of launch and potential prices

In 2021, Dassault Aviation started to produce the plane. It has a long way ahead of being constructed, tested, and certified. The estimated date of launch is 2025, but there is no precise day or even month.

The estimated price is around $75 million, and it’s going to make the Falcon 10x one of the most expensive private jets in the world making its price close to big passenger planes like Boeing 737. But we also have to say that Bombardier Global 7500 is priced at $73 million, and Gulfstream G700 will cost around $75 million, too. So, Falcon 10x isn’t much more expensive than the competition on the market.