Among the superyachts, Lurssen yachts are like film stars among ordinary people. Each yacht built by Lurssen is a masterpiece that can melt the heart of any person who is interested in yachting. The shipyard mainly builds luxurious custom superyachts that cost hundreds of millions. These vessels are only affordable for the richest people in the world.

Today we’ll tell you about one more superyacht built by our favorite shipyard in Germany. This is Quantum Blue yacht which is probably one of the most up-to-date and technological private vessels that has been built within the recent decade. The yacht is astonishingly beautiful and it offers exquisite features to surprise even those who have seen a lot of luxurious vessels in their lives. 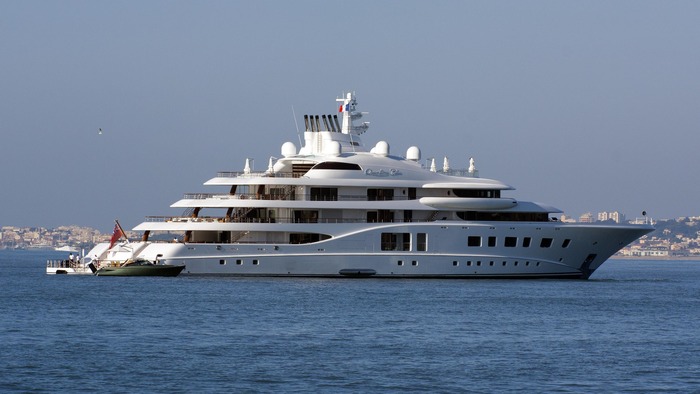 Quantum Blue yacht belongs to a Russian businessman, Sergey Galitsky. He owns one of the biggest chains of retail stores called ‘Magnit’ and he is also the president of a local football club. Sergey loves luxurious things, and today we’ll see that he has a wonderful taste for good possessions.

The yacht was built in 2014. Now it’s the 49th longest motor yacht in the world showing 104 meters or 341 feet in length. The exterior design was made by Tim Heywood Design studio, the interior was designed by Alberto Pinto. With a relatively small draft of 4.1 meters and a beam of 16.8 meters, the vessel can basically travel anywhere in rivers, big lakes, seas, and oceans.

The zero-speed stabilizer is included. It means that the yacht can easily travel and be anchored during storms causing no problems for the owner and his guests. The stabilizer works when the yacht is anchored and it resists swaying. Even if you are sea-sick, you can travel comfortably on Quantum Blue.

The yacht features two diesel MTU engines with a total power of 9938 horsepower. The engines consume marine diesel. They aren’t the most technological and modern, but they are quite efficient in terms of fuel consumption. The MTU engines are very long-lasting. The yacht can still travel even if one engine is out of order. This is quite important for being safe in oceans and seas.

The yacht has a classical steel hull and aluminum superstructure. It’s really reliable and long-lasting.

Decks and entertainments onboard

There are 4 decks that provide 4 different levels for your entertainment and accommodation. The yacht can take 14 passengers in 7 luxurious cabins and it needs about 18 crew members to ensure the safety and comfort of traveling. There is a big elevator that can take you to any level of the yacht quickly and comfortably.

If you own a small helicopter, you can easily visit the owner at Quantum Blue, because there is a helipad. The swimming pool and beach club aren’t that big, but still, guests can relax here. There is a gym for keeping in good shape. There is also a spa zone. Guests can watch a film in the cinema or relax in the jacuzzi on the open deck. The underwater lights look perfect when the yacht is spotted in the evening or at night.

There is a tender garage, but unfortunately, no one can tell you for sure what kind of tenders the Quantum Blue yacht has onboard. We believe that should be at least two boats for a comfortable reach to the shore wherever docking is impossible and also some tenders that are made for joy. The Quantum Blue yacht is rarely spotted when the owner has a holiday. It’s usually on the route. So we believe that the owner doesn’t often use the yacht for relaxation and entertainment.

Where do they use the yacht?

Unfortunately, the yacht is never available for charter. That’s the main reason why so little is known about the vessel. Only Sergey Galitsky and his close people can board the yacht and travel around the world.

In 2019 the yacht was spotted in Germany near Lurssen’s shipyard. The rumors were that the owner wanted to sell the superyacht, but actually, it was a small refit or some servicing because Sergey is still the owner.

The yacht is often used in Europe, it travels through the Mediterranean and docks in many ports in tourist locations and resort zones. So we assume that Sergey with his family and friends loves spending time in the sea and getting to the most beautiful places around the continent.

The yacht has never been spotted in other parts of the world, but we think that it was in oceans. These Russian oligarchs aren’t very open guys, and they aren’t likely to tell everyone what they are going to do and where they are going to go. So, Quantum Blue yacht often escapes the eyes of spotters, but it’s still often on the route and makes the owner happy.

The price and maintenance

It would be too hard to try and ask Sergey Galitsky how much he paid for the yacht. But we believe the price was between $200 and $250 million. It wasn’t hard to estimate because we know the prices of bigger Lurssen superyachts, so this one should have cost the owner somewhere near $2 million for 1 meter of length.

The yearly maintenance costs are estimated to be about $15 to $20 million. This is not the most expensive yacht in the world, but yeah, you need to be a big businessman to afford such a vessel.