Allure of the Seas is a huge cruise ship belonging to Oasis-class. It was launched in 2009 and completed its maiden voyage in 2010. The ship belongs to the world’s top 10 biggest passenger vessels. Royal Caribbean operates the ship and uses it in routes all over the world. This is one of the most exquisite, interesting, and unusual cruise ships in the world with a big range of wonderful entertainment.

Royal Caribbean offers a lot of options for accommodation and also keeps changing the ship to make it even more interesting for people who use different company’s ships for spending their vacations. In 2020 the ship was completely refurbished and refitted to add new cabins and new entertainments.

Today we’ll be talking about Allure of the Seas, its advantages for travelers, and also about specs, routes, accommodations, and other things. 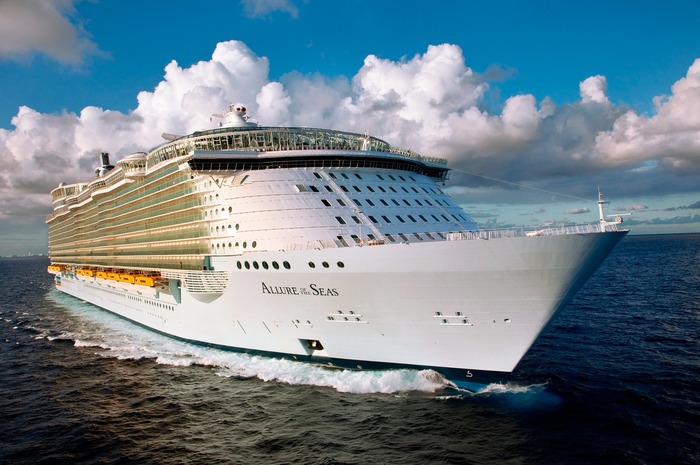 Main features that will amaze you

Allure of the Seas is an 18-deck passenger ship with 16 decks accessible for travelers and 2 technical stores. The ship has 2704 rooms and can accommodate over 5400 guests at double occupancy. The maximum passenger capacity is 6 780 people. Also, over 2 200 crew work there to ensure that every guest feels comfortable during the cruise. The ship is a city on the water and it can survive autonomously for quite a long time.

The length of the ship is 362 meters or 1187 feet. This isn’t the largest vessel in the world as of now, but just for comparison – the Titanic was 100 meters shorter. The cruise ship is equipped with 3 enormous Wartsilla engines each producing nearly 19 000 horsepower, and also another three engines by the same producer producing over 24 000 horsepower each. The cruising speed of the vessel is 22.6 knots which would equal 26 mph if you convert it to more understandable units.

The ship was built in Turku, Finland. Before the ship made its maiden voyage, it was equipped with a huge 2000-square-meter solar energy plant that powers the shopping district. The 80-kW solar array is designed for marine conditions and the solar panels are made to withstand people walking on them.

But when you look at the cruise ship, the technical specs aren’t the most important factors you’d want to know, so let’s dive into the entertainment.

Deck plan and main entertainments at Allure of the Seas

The staterooms are located starting from deck three. Here you will also find first entertainment zones such as two theatres, the main dining hall, and also a conference center. Then, on deck 4 you will find the casino, ice rink, and also the huge entertainment zone with different spots to visit. There are no rooms here, so the deck seems to be quite huge. Deck 5 is the main spot where you can have a walk, buy something in the shops and also visit the aqua theater. One more thing that some people use in the mornings is the running track.

Let’s move up to deck 6 and find quite a lot of bars, cafes, and restaurants. But here you will also see a lot of staterooms, so the deck seems to be a little narrower than the two previous decks. In the front part of the ship, there is a huge gym and SPA zone. Then, deck seven offers two rock climbing walls, on deck 8 there are again bars, cafes, and lounge zones for chilling out with friends. Decks 9 and 10 offer just staterooms, so there is nothing interesting unless your room is here. On decks 11 and 12 there is only 1 bar along with a big number of rooms. Starting from deck 14, you will get many more cool things to do. Here, for example, you will find a kid zone with workshops, a play zone, a kid science lab, and many other spots to have a great time with children.

Deck 15 will offer no rooms, but there is a bunch of entertainment options. For example, there is a sports court, teen disco, sports pool, main pool and whirlpools, bar zones, beach zone, and also a solarium. On deck 16 there are two Flowrider attractions and also some open bars and terraces. Decks 17 and 18 will offer luxurious suites – the most expensive rooms onboard and also some entertainment for passengers in these suites.

We should add that there is a zip line, there are 19 places where you can eat good lunch or have a snack, and there are also 13 bars and lounges where you can have a drink. The allure of the Seas has won major awards for being the best cruise ship and the best passenger ship for entertainment a couple of times in 2016 and 2017. Now it’s even more interesting for tourists after being refitted.

What kinds of rooms you can get?

Accommodation types are standard for the Royal Caribbean services. The majority of the staterooms are sea-view or balcony rooms. It means they have either a big window or a balcony with small chairs and a tiny table. One more type of room is interior staterooms. They are cheaper, but there is one trouble – you don’t have any windows there. In some rooms Royal Caribbean offers a virtual view option – the huge LED screen is a kind of window substitution; it shows the real-time broadcast from numerous cameras placed on the ship hull.

The most expensive kinds of accommodation are the suites, The Royal Suite will offer you two levels, multiple areas for chilling out and having rest, spectacular views from the highest decks of the ship, and also incredible interior design.