We all know that LGBT rights are not equal all over the world. Unfortunately, there are quite a lot of countries where gays, lesbians, bisexual people, and transgenders are illegal or have to face a lot of pressure from society. When it comes to human rights, we should remember North Korea. This is one of the most closed countries and we know little about it, but we are pretty sure that the LGBT society in North Korea lives like hell.

De jure, being a gay or lesbian or even forming a one-sex family is not illegal in North Korea. But in fact, local authorities don’t welcome gays and lesbians, they think that these people are ill and need treatment, so all the society opposes LGBT. We couldn’t find at least one open gay or lesbian in the country, because it’s quite hard to come out there. You don’t even have social media to post the coming out message to tell your friends and family that you have some different kind of sexuality than they expected. 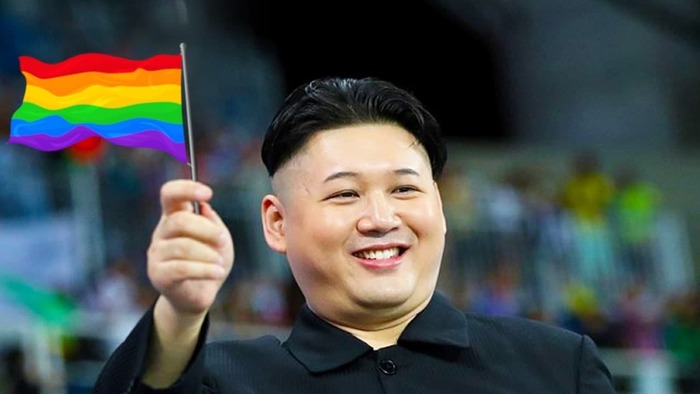 But the most important thing is that you can get to prison or to the hospital if you come out as a gay or lesbian or transgender. Who cares about the law in a country with a dictatorship?

How can they send LGBT people to prison?

There is no direct law that would forbid being gay. But there is a sentence in criminal law that can bring a person to prison for standing “against the socialist lifestyle”. A judge can decide whether a person lives an anti-socialist life and needs to be sent to prison for years. Since 2009, they have been using this sentence to send dozens of LGBT people to prison. It may be hundreds or even thousands, but the statistics are closed and we couldn’t get the chance to see it.

Also, there is sentence 194 of the criminal code that forbids to create, distribute, or possess any ‘decadent’ cultural elements. We also suppose that this article is good for judges who can easily call LGBT culture ‘decadent’ and send a person to prison.

If a person feels that he or she has different sexuality, it’s very hard to understand what to do with that. If you look at Western society, there are many school subjects, TV shows, and talks, brochures, and videos showing that being different is OK and showing how to cope with all the troubles that accompany your coming out.

But still, statistics show that even in the US people don’t always come out telling their friends and relatives about their different sexuality. In California, there are 4.8% of people declared that they belong to the LGBT society. But in South Dacota, for example, it’s only about 2%. We believe that in North Korea there is one person who came out officially and survived. He is Jang Yeong-jin, and we’ll talk about him later.

In North Korea, all TV programs, internet sites, and even radio talks are fully censored. It means they show and tell people only what’s needed for propaganda. That’s why being a gay or lesbian will be extremely hard because you won’t understand what’s going on in your life, and your socialist parents will probably try to cure you if you try and talk to them.

Now Chinese culture with Chinese illegal smartphones and the internet starts spreading in North Korea, and this is the only way young people can get to know about LGBT. There is total silence on this topic in the local media, and that’s probably the worst thing.

The story of one North Korean gay

Jang Yeong-jin is a North Korean citizen who now lives in the US and is going to marry his boyfriend. But until the happy end, this story wasn’t as romantic and warm.

Yeong-jin married a woman in North Korea when he was 27. Then, 4 years later his brother asked him why he still didn’t have kids. Yeong-jin answered that he had never been aroused by women, and he rarely has sex with his wife. His brother recommended visiting doctors, and Jang spent a year on different medical procedures. No one could just tell him that he was gay.

Yeong-jin says that if in North Korea a man says he doesn’t like women, people will think he is unwell. In a year after his divorce, Yeong-jin understood that he feels a kind of love towards his childhood friend. And at that moment he decided to leave the country after he understood that he couldn’t have a normal life there.

He had to crawl through the demilitarized zone to get to South Korea risking his life. When Jang was 62 he met a Korean-American called Min-su in one of the dating sites. A couple of months later he was rushing to the US to first meet his new boyfriend, and now they are going to marry. It took Yeong-jin 30 years to finally find his couple.

The North Korean army is a bad place you will never want to get to. During all 10 years of your service, you officially agree with celibacy. It means you aren’t allowed to marry or have a sexual relationship with anyone. But let’s face it, this communistic demand seems to be unrealizable for any person. So, soldiers in the Korean army are known to break this rule and have sexual relations that are often homosexual.

Anyway, this is known as situational behavior, not orientation. And this is wildly tracked by army leaders.

If you are a gay or lesbian in North Korea, the best way for you is to escape from the country by any means. Once you are away, you can open yourself as a new person and, yeah, it’s going to be really hard and sometimes close to impossible, but it’s even harder to stay there and hope that something will change.