Among the superyachts, some vessels are much ahead of their time. They create fashion in the shipbuilding industry and make other producers copy their features. Dilbar yacht is exactly the boat to be called the best superyacht in the world. It’s extremely expensive, very large, and unbelievably luxurious.

The yacht is owned by a Russian tycoon, Alisher Usmanov. It’s the fifth yacht in the world in terms of length. The boat was built in 2016 by the Lurssen shipyard in Germany. And you will be amazed if you see it docked in any port in the world. The yacht has a special design by Andrew Winch and Espen Oeino creating the most exquisite forms and the most beautiful appearance we have ever seen in the yachting industry.

You may be surprised to know that the boat built in 2016 was the third Dilbar yacht. Today we’ll talk about the yacht, reveal its specs, show its interior, and also say the prices. Want to have a superyacht? Then you’ll be interested to know what exactly you can get when buying such a vessel. 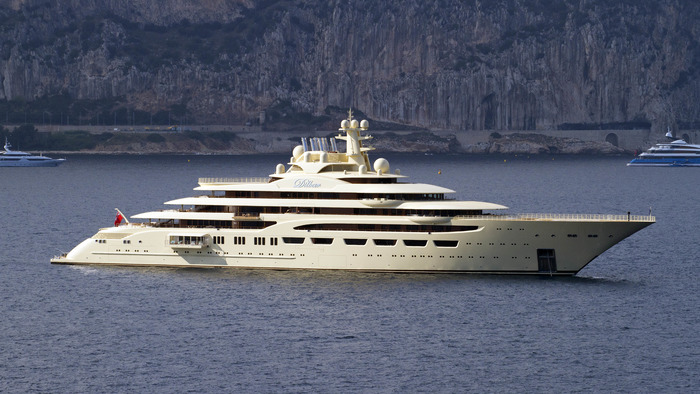 At the time the yacht was launched, it was the biggest private vessel in the world in terms of gross tonnage. And yes, it is really huge. The length of 156 meters or 512 feet is incredible. The beam of 24 meters or 79 feet and also a draft of 6.1 meters don’t allow the boat to travel without proper route investigation. If you are the captain of Dilbar, you’ll have nervous work each day trying to figure out where you should go to avoid obstacles in the seas and oceans.

Dilbar can take abord more than 40 guests and more than 80 crew members. It has over 3800 square meters of living space, and that’s amazing. For wiring, all the equipment on Dilbar, Lurssen engineers needed to use 1100 kilometers of electric wires.

The design is one of the most important points. The exterior of the yacht seems quite compact. If you look at Azzam or Dubai yachts that are only slightly bigger than Dilbar, they seem unbelievably huge at the first sight. But just a quick glance at Dilbar will give you the feeling that this is just one of those compact luxurious yachts. You’ll never guess it is the fifth longest private vessel in the world.

The yacht has seven decks to accommodate guests and crew. 20 en-suite cabins are much like luxurious hotel suites. Unfortunately, journalists are never invited to travel aboard Dilbar yacht, so we have little to no information on its interior. But we are quite sure that Andrew Winch did his best to ensure that every single guest is amazed at the opportunities on this yacht. Winch Design company was responsible for interior design, and you probably know that this studio has designed the majority of luxurious superyachts.

The yacht has a separate conference room as well as some other rooms for meetings. There are also spacious gym and spa areas.

Technical miracle made by Lurssen

The German shipyard, Lurssen, is the most popular company among rich guys who want a superyacht. The company has built 5 out of the world’s 10 biggest superyachts and it keeps leading the market. Dilbar yacht was one of the most expensive projects, according to estimates, so we suppose the technologies here were the most up-to-date and even futuristic.

They needed to ensure that stabilizing systems work right, because otherwise, the yacht couldn’t travel through the oceans. The stabilizing system must have been engineered from scratch using some technologies that they had used for the Azzam yacht.

The engine is a Wartsila diesel motor, but it is coupled with an electric engine making Dilbar the biggest hybrid yacht and one of the most environmentally friendly superyachts if you can combine these two words at all. The hybrid power allows the yacht to travel at 22.5 knots of maximum speed and over 17 knots of cruising speed. That’s not the fastest superyacht in the world, but it burns less fuel and proves to be more ecological than its competitors on the market.

Special tenders for the superyacht

If you own a yacht like Dilbar, you don’t want to have simple tenders like all other yachts have. And we won’t tell you a lot about a 9.5-meter boat that can dock inside Dilbar. This is a thing that nearly all megayachts have just for getting somehow to the shore at places where there are no docks and ports.

But we’ll tell you about the specially built Airbus helicopter that comes as a tender for Dilbar yacht. It’s Airbus H175 with completely new interior features. It has elite materials, improved interior insulation, and special seats for passengers. It even has a couch at the rear so that passengers could feel comfortable during long flights. The estimated price of this Airbus H175 helicopter is around $17 million because of special design changes made to the machine when preparing to be the Dilbar tender.

We are quite sure that Dilbar has many more water tenders, but there is no information about them.

The yacht is owned by Russian businessman, Alisher Usmanov. He is a 67-year-old tycoon said to have a net worth of over $18 billion. He earned the money by being one of the main shareholders of USM Company mainly making its profits by selling metal. In Europe, Alisher Usmanov is well-known for being one of the owners of the Arsenal football club. He has invested money into Facebook, Alibaba, and many other world’s richest companies.

Times magazine recently called Alisher Usmanov one of the most generous philanthropists in the world. He has quite a lot of his businesses in Britain, so he is often in the European press. But there are still many positive facts about Usmanov.

Alisher is known to travel a lot on his huge private yacht. Dilbar is often seen all around the Mediterranean and also in other locations. The boat even has its private berth in Barcelona. It’s the biggest in the world, a 160-meter-long berth that was recently bought out by an unknown buyer in OneOcean Port Vell. Although no one knows the name of the buyer, people post pictures with Dilbar docking there quite often.

Dilbar yacht was named after Alisher’s mother. It’s the third Dilbar yacht in history. The first one was built in 2005 by a Dutch shipyard and it was only 66 meters long. Then, in 2008 Alisher Usmanov bought another yacht after renaming and selling his older boat. The new Dilbar was 110 meters long, it was built by Lurssen. Now it’s called Al Raya and it belongs to the Royal Family of Bahrain. In 2016 Alisher got his third Dilbar yacht. We hope there will be another Dilbar which could be the world’s longest superyacht.

What’s the price of Dilbar Yacht?

The 156-meter-long boat can’t be cheap. There isn’t any official information about the price of the superyacht, but experts say it may have cost $600 million to $800 million when it was launched back in 2016. The yacht isn’t now listed for sale and it isn’t available for charter, so we have no idea how much it costs right now.

Comparing Dilbar to other superyachts that are now available for sale, we would say that Alisher Usmanov could sell it for $500-600 million.

But even if you have half a billion, you need to remember about maintaining costs. You’ll need to dock it all year round, buy immense amounts of expensive marine diesel, repair and maintain the boat. The annual costs for having such a yacht will be around $60-80 million. Not a cheap thing to have, but it helps you stand out and enter the society of yacht owners who are basically the richest and the most influential people in the world.