Among tall reporters who work in sports and appeal to the audience, we can remember Maria Taylor. This 34-year-old woman has been working as a sports journalist and reporter for more than a decade. She has worked in college basketball, college football, college volleyball, NBA, and NFL. She has been successful and well-known thanks to her unusual appearance, for a reporter. Maria stands 6 foot 2 inches or 188 centimeters, and she looks really amazing.

In her early years, Taylor was a promising athlete. She played basketball and volleyball in high school and she was even selected to the USA Volleyball Junior National Team in 2004. Between 2005 and 2009 she continued playing volleyball and basketball at the University of Georgia. But Maria didn’t choose to continue her professional sports career, even though her results in the university teams were quite good. 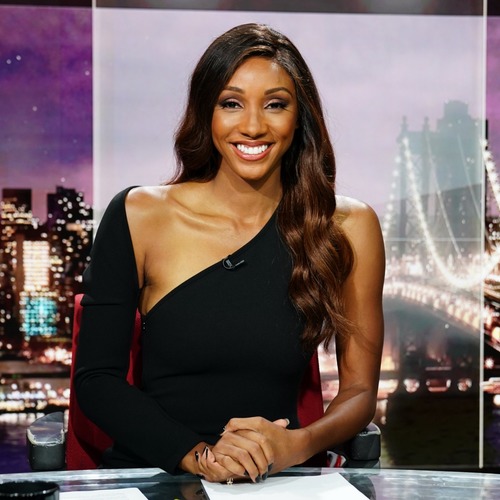 Reporter career and conflict with ESPN

At the University of Georgia, she also started her reporter career. For three years she was the reporter and host for various sports events in the university and she also appeared on various TV shows like SportsNite or Dawg Report.

In 2013 and 2014 she started her professional career as a sports reporter in ESPN and SEC Network. In 2017 Maria joined ESPN College GameDay Broadcast and replaced Samantha Ponder. After that, her career in ESPN was quite successful. The viewers loved her, the fans got mad when they saw Maria hosting the programs. She became a host in many important shows and broadcasts of ESPN.

But finally, she was forced to leave the company because of a race scandal. In 2021 right after the NBA finals, she left the network to join NBC Sports. It happened after the leak of the conference call between Rachel Nichols and Adam Mendelsohn. In the call, they discussed that the decision to choose Maria to host NBA finals was based on her race rather than on her professional abilities as a reporter. After the scandal, Taylor couldn’t keep working in ESPN and left the network.

Today she works for NBC Sports, and she was one of the main stars to cover the 2020 Summer Olympics that were held in summer 2021 in Tokyo. Also, Maria Taylor contributes to other NBC Sports projects like Sunday Night Football.

The scandal with ESPN became viral and it’s not yet solved completely. But Maria doesn’t comment much on the situation, so we don’t know what she thinks about her career changes and if she is happy to work for NBC Sports instead of being a star of ESPN.

Maria Taylor is known for keeping her private life secret. She was first married in 2019 to Rodney Blackstock. They had been dating for a long time since 2014, and finally got married. But their marriage wasn’t lasting long and the couple broke up a year later. They had two engagements, one in 2016 that they called off, and one in 2018 that ended up with a marriage in May 2019. The couple doesn’t comment much about their divorce and the reasons for it.

We only know that they divorced and in 2021 Maria Taylor married another man. And again, the secrecy of their marriage is unbelievable. We can only presume that her husband’s name is Jon, and we can see it on one of the social media posts. But on her Instagram, Maria doesn’t share many pictures of her wedding. We can only see that her husband is much taller than her. And the couple looks really wonderful.

Why did Maria Taylor give up playing sports?

She never told the reporters why she chose to be a journalist rather than to play on the court. In her university years, Maria combined playing basketball and volleyball professionally with her career as a reporter. Probably, when she finished university, Maria already knew that being a sports reporter was her dream job. She didn’t even try to apply for the WNBA draft or to get a place in one of the women's volleyball teams in the US. She started working as a reporter with ESPN and SEC Network and that brought her to success.

Now Maria Taylor is even more popular thanks to the recent racial scandal with ESPN. Many people who aren’t even interested in sports, started searching for information about this woman. She became a real star in the world of sports.

We should say that Maria is a professional reporter who is able to draw the attention of the fans. She is a beautiful woman with a wonderful sounding voice and she is welcomed by any sports channel in the USA.

How much does Maria Taylor earn?

Her recent contract with ESPN brought her $1 million a year. This is a base salary, and there also were bonuses. In 2021, right before Maria Taylor was going to leave ESPN, they offered her a new contract worth $5 million a year. We suppose, NBC Sports pays a little less, but there are no details about the contract.

Maria is also a co-founder and one of the main people in a charity organization called Winning Edge. The organization helps young sports people fit into professional society and get equal chances to win their places in top-ranked teams in the US.

We hope we’ll be able to get to know more about Maria and update you on new facts about her life and career.