Lurssen’s project Opus is now at sea. This superyacht was delivered in 2020, and in 2021 it was spotted multiple times with the owner onboard. The Nord superyacht is one of the largest vessels, it takes 10th place in the world among motor yachts by length being 142 meters or 466 feet long. The owner of the yacht is Russian billionaire Alexei Mordashov. The approximate cost of the vessel is around $500 million, and it’s even more expensive than some longer motor yachts out there.

While Lurssen shipyard was building Nord yacht, many enthusiasts said it would be the most beautiful yacht in the world. And we have to admit that the vessel is really good in terms of design. It looks unusual thanks to the front part. Nearly all other yachts have a pointed bow whereas Nord has kind of a platform for the name of the vessel, just like luxurious cars would have for the logo of the brand. Also, the color is unusual. The contrast of white and black parts of the body makes the Nord yacht look beautiful and unique. It still looks like a superyacht, not like a cruise ship which is usually a problem for the yachts of this size. 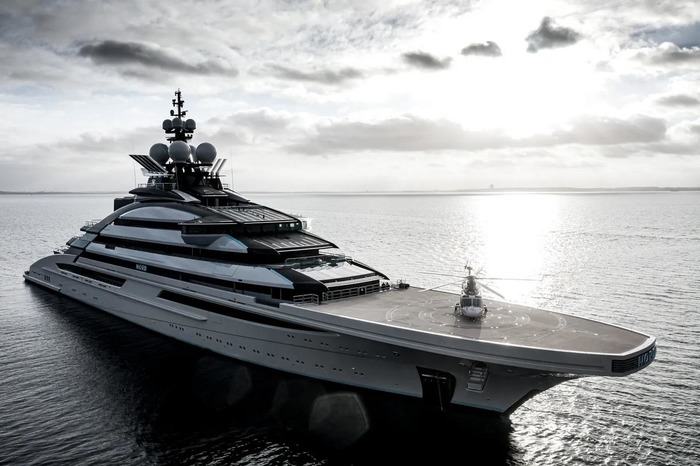 Unfortunately, the yacht isn’t available for charter, so there are only a few pictures of the interior. Alexei isn’t the easy-going guy who would invite hundreds of people to share a trip over the Mediterranean with him. If you happen to be there, please send us some pictures of the yacht staterooms and suites and we’ll include them in the video. For now, this is the only footage of the yacht’s interior we have. Both interior and exterior design features were created by Nuvolari Lenard.

The yacht has 5 decks and 20 guest cabins. The total capacity is said to be 36 guests. Around 50 crew will be needed to provide a comfortable journey for all guests. This is what amazes in such superyachts – you need one and a half crew members per one guest, and you can’t even imagine how expensive it is to maintain a vessel like this. For Nord it could be 3 to 5 million dollars yearly.

Nord Yacht is 142 meters long, as we’ve said before. The beam is 19.5 meters, the draught is 5.4 meters at maximum load. There are 4 MTU engines with a total power of 23 300 horsepower. The marine diesel engines seem to be the most reliable, though a not very economical way to power the yacht. The cruising speed is said to be 15 knots, the maximum speed is around 20 knots which is quite usual for this kind of vessel.

The yacht is flagged in Germany and this again says about the wealth of the owner. For reducing taxes and overall maintenance costs, superyacht owners usually flag their ships in special zones to avoid additional expenses. Nord’s owner obviously didn’t care about a couple of spare million dollars when he agreed to flag the ship in a European country.

Alexei Mordashov is a chairman of Severstal company and he has 77% of the stocks of the business. Bloomberg says that the net worth of this guy is around $25.8 billion. And he is currently the fourth richest person in Russia. He has his main business in metal, mining, and energy spheres, but he also has a lot of other businesses all over Europe and Russia. It would take us one more video to tell you about Alexei’s businesses in many countries, but we will only say that this person is extremely rich, and yes, he can afford to buy a couple of superyachts.

Previously, Alexei used the Lady M yacht built in the US in 2013. This was the biggest yacht of the kind ever built in America. The yacht still belongs to Mordashov, but it’s now available for charter. The yacht is 65 meters long, it cost around $50 million when new, and it can take 12 guests onboard.

Nord yacht is now often seen in Europe, but we believe it will complete a lot of transatlantic journeys. Alexei has many businesses in the US, so we’ll probably see the beautiful yacht docked somewhere in Florida and we’ll be able to have more pictures of it.