Recently NASA claimed that nuclear propulsion can get humans to Mars much faster than any currently existing technologies. Also, DARPA signed contracts with numerous contractors such as Blue Origin and Lockheed Martin to build a nuclear-powered rocket prototype for changing the game in space.

Today we’ll look at the technology of nuclear propulsion and will try to estimate the chances of such rockets in space. Will humans go to Mars as tourists? Will we be able to reach the edge of the solar system without sending families missions to space just to have enough time for humans to get there? Will nuclear power influence space exploration and change everything we know about space travel? Too many questions, let’s start to answer them. 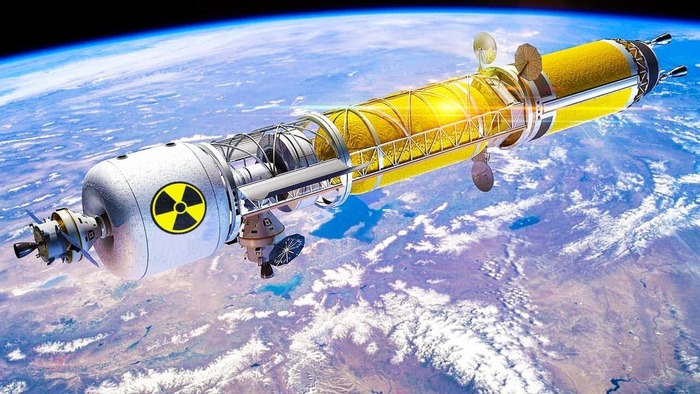 Why nuclear power is good for space?

You aren’t going to send a rocket that works on some kind of traditional fuel to a year-long mission. Can you imagine a diesel rocket? Even if it was possible to get it to space, such spacecraft would need dozens of years to get to Mars. Also, can you imagine what would be the size of its fuel tank? So, scientists needed some other inventions and they came up with hydrazine. This is a kind of blend of hydroxyl ammonium nitrate with an oxidizer… Well, let’s call it traditional chemical fuel for rockets. It’s highly toxic for people, so it’s always dangerous for astronauts and people who work at launching bases.

When it comes to alternatives, there are liquid oxygen and liquid hydrogen upper stages of rockets. For example, Boeing’s Delta III and Delta IV now use these types of fuel. But they aren’t much more efficient or much safer. So the question of which fuel we should use for manned Mars missions is still hard to answer.

And here nuclear power can be a really good idea. Well, it’s not about building a huge nuclear reactor, but about using nuclear fuel to heat up the hydrogenic fuel to insane temperatures for getting more thrust. So basically the nuclear power reactor will work as a heater, and it won’t need a lot of fuel for this. Now the liquid fuel is heated up with a chemical reaction, and it’s extremely dangerous. Hard to say if a nuclear reaction will be less dangerous, but the fact is that NASA is considering nuclear-powered rockets to be the only chance to get to Mars faster.

Nuclear thermal engines are very efficient. There have been test launches in labs, and these engines showed twice higher thrust than traditional chemical rocket engines. And this brings hope to shorten the journey to Mars for a couple of months. Actually, nuclear thermal rockets are thought to be the technologies for the next Mars mission. NASA will probably send one more robotic mission prior to sending people to space. But the thing is that nuclear thermal engines make it possible to reach Mars in 3 to 4 months. While now the estimated journey time is 7 to 8 months.

Nuclear electric engines are the second technology that is less possible but is still considered. The idea is that a nuclear reactor generates electricity and charges the main engines of the spacecraft. It provides less efficient in terms of thrust, but it shortens the amount of fuel needed and also makes all the construction much safer and cheaper to make. Now experts say that the technology is prospective, but it’s unlikely that it can be used for Mars missions because the speed of any spacecraft will be limited.

NASA is now searching for more companies to join the research and the company is ready to sign contracts with businesses that can help with building a nuclear-powered rocket. For now, DARPA signed the contract with Blue Origin to build a nuclear-powered rocket up to 2025. Also, Lockheed Martin got the same task with bigger funding. But still, there is some money to have from NASA and DARPA if you have the project of such rocket.

Will the US be the first to build a nuclear-powered rocket?

We believe it’s extremely hard to build a rocket with a nuclear reactor inside and send it to space. So there won’t be many countries that will want to invest in this idea. But still, nuclear reactors on spacecraft aren’t a very fresh idea. In 1944 first projects appeared, and starting with 2000, a dozen of countries have been working under these projects.

Russia announced in 2018 that they had successfully tested their nuclear-powered spacecraft engine and also fuel rods of special type for it. At the same time, they announced that they had plans for ion engines for spacecraft and they were already testing one of them.

In 2012 the UK scientists claimed that they were building a nuclear-powered engine to use it in their future spacecraft. The engine was aimed to power the Project Icarus mission to send equipment to interstellar flight.

Scientists in Israel have conducted numerous studies showing the new type of fuel that can be 50 times more economical and safer than the traditional nuclear fuel. But until now these studies are just theories, no real projects have been completed.

In 2000, Italian scientists showed their study of nuclear-powered spacecraft engines and their prospective in a manned mission to Mars. Their calculations were very satisfactory, but until now no engines have been made. Italy is now not so interested in space exploration.

Are there any concerns?

Well, you shouldn’t think that there aren’t any concerns regarding nuclear-powered anything in our society. As soon as ecology activists heard that DARPA and NASA were planning contracts with Blue Origin, General Atomics, and other companies, they started painting their posters showing all the hate to NASA, the US government, and all the topics of space exploration. But we have to take some risks if we want to see the future coming to us.

The initial risk is about the possible failure of the rocket in the atmosphere or in low orbit. In this case, radioactive material will be spread in the environment and we’ll have huge troubles. Then, there are other risks. Like the reactor can be destroyed during the mission. The radioactive materials may then be thrown away over the unpredictable area and cause much harm.

Then, we’ll need to return the rocket if we want to send a manned mission to Mars. And here some other risks come. It’s extremely hard to return anything from space. We believe that there will be a special capsule that will return people to Earth and all the other parts of the rocket will turn to space junk. But there are other concepts that are aimed to return the whole rocket to the Earth along with astronauts and the nuclear reactor. Is it a good idea? Well, it’s like a partially piloted nuclear bomb rushing towards the Earth. Would you like one to land somewhere near where you live?

There are still many problems and questions, but one thing we can say for sure: NASA wants nuclear-powered rockets with their maximum thrust and higher speeds so that humans could travel to Mars with lower risks and much faster.

How much will the rocket cost?

DARPA had contracts with Blue Origin for $2.5 million, Lockheed Martin for $2.9 million, and also with General Atomics for $22 million. But these contracts are military ones and the rockets won’t be used to fly to Mars and back. These rockets may be used to send military satellites to orbit.

There is also a contract with Gryphon Technologies for $14 million to build a demonstration rocket with a nuclear-powered engine.

We believe that NASA’s projects will be much more expensive. They are supposed to build a spacecraft that has to be able to travel to Mars and back. And that will take much more time and money to ensure the technologies are appropriate. Try a couple of billions.