When it comes to yachts, Lurssen is the company to consider. This German-based business has developed the world’s most famous yachts and boats, it has successfully signed contracts for building super boats and mega yachts with a lot of rich people on this planet. And for now, Lurssen has a great reputation and is known as an enthusiastic company in terms of modern technologies. But today we’ll look back at what the company was building nearly 20 years ago.

It’s the Octopus yacht that was built in 2003. When you see the yacht in a dock, you may think it’s kind of a cruise ship, but actually, it has always been a privately owned vessel formerly controlled by Paul Allen, co-founder of Microsoft, and now by his sister, Jody Allen. The Octopus yacht has seen the whole world and has been in so many places that we’ll need to make a separate video to tell you about its adventures. But today we’ll try to look at the main features of the yacht and find its main problems that must have been found during nearly 20 years of use. 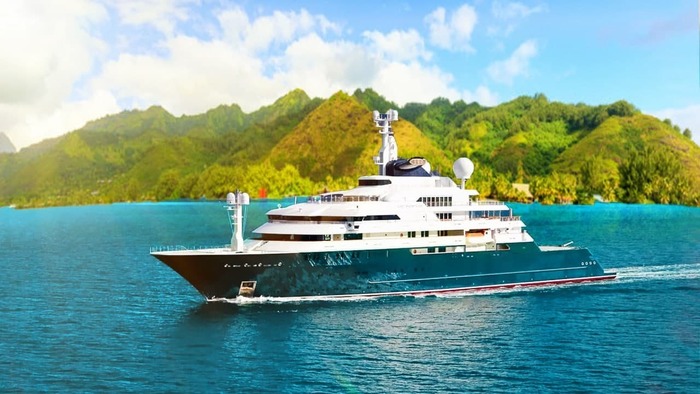 Octopus yacht is 126 meters or 414 feet long. It sits in the 21st place among the longest motor yachts in the world. At the time of launch, there were just 2 or 4 boats that could compete in size with this Lurssen masterpiece. It cost $200 million back in 2003, which would make around $300 million in today’s money. Now Octopus is available for sale, and the owner wants around $275 million for the boat. The yacht was refitted in 2019, so it now looks and goes just like a new superyacht.

It can take on board all your business partners

The Octopus yacht was constructed for multipurpose use and it was the most luxurious yacht of its time. Today we can see Azzam, Eclipse, Dilbar, and many other mega yachts floating around seas and oceans. But at the time of Octopus launch, it was a one-of-a-kind boat.

It has 8 decks including the private deck of the owner. The yacht can take 26 guests and they will find comfortable places in 13 guestrooms. What’s more astonishing, the yacht needs a crew of 63 members and there are 30 cabins for the crew on the boat. Even if you plan to cross the ocean, there will be a lot of things to do while on the route. Two bars, a spa, library, and cinema are for your pleasure. There is also a gym, a huge observation area in the front part and even a basketball court! What would you say if you got for a while to a glass-bottom underwater observation lounge?

Octopus has two helicopter pads. There is a 43 feet long tender docked in the transom. A total of seven tenders is there to entertain the owner and guests. On one of the upper decks, the yacht has quite a big pool for those sunny summer days. Side hatches at the waterline are meant to be the docks for personal watercraft. There are even two submarines one of which is a remote-control vessel. It was even lent out to Google Earth for their project “Explore the Ocean”.

Its interior is still a piece of luxury

This is a huge villa on the water. It resembles one of those immense cruise ships. All the decks are equipped with comfortable furniture, so your guests will always find the best places for them to have some rest. Observation areas and lounges are all over the ship, especially on upper decks. There are eight decks on Octopus yacht, and they are connected with an elevator. There is even a car garage on the yacht so that you could take your vehicle with you on the journey.

One of the middle decks is devoted to scuba diving. The boat is equipped with everything needed to dive in any part of the world. The special wooden terrace is made to jump into the water and easily go out. This part also stores all the needed equipment for diving. You’ll be quite amazed after getting to one of the rooms and seeing that it’s capable of storing 2 large helicopters. There is a special room where they store quite a big motor vessel for approaching the shore areas. And that looks just unbelievable in a private boat.

The interior of each room looks quite modern and sleek. But we have to admit that it’s not as luxurious as you could expect it to be. Everything is practical, it’s all made of long-lasting materials. The main aspect when creating the yacht was the comfort of every guest. So the Lurssen designers and engineers made sure that every person has enough space and feels good when on the yacht.

The technical side of the yacht is mind-blowing

Special technologies for stabilizing the yacht were created by Lurssen engineers to ensure that in any position the vessel brings comfort to its owner and guests. Even when the yacht is anchored, stabilizers still work and resist any kind of swaying.

The maximum beam is 21 meters and you can’t say that it’s very big. Octopus proves to be very maneuverable. The hull is made of steel which was a traditional way for shipbuilding in 2003. The boat is equipped with 8 MTU engines each producing 2466 horsepower. The cruising speed of 18 knots seems to be abnormally high for such a big vessel. The maximum speed is around 19 knots or 22 miles per hour. The maximum range of the yacht is over 16 000 miles and that’s amazing.

Octopus is an Explorer yacht type. These yachts are never made with top luxury inside, they are always produced for practical purposes. But Paul Allen wanted the boat that would be great both for entertainment and for science. He probably got what he wanted if we look at the number of exploring missions Octopus was involved in.

Octopus yacht is often for rent, and sometimes for free

If you know Paul Allen and Jody Allen, you may be aware that they are philanthropists and they are always ready to give money for charity. Octopus yacht often completes charity missions for businesses, science, and even for ordinary people.

For example, Paul Allen loaned Octopus for numerous rescue operations and search missions in the sea. The most popular mission was the hunt for an American pilot and two officers whose plane was lost near Palau.

In 2012 Octopus was rented by Royal Navy in their attempt to find the bell from the Admirall-class battlecruiser HMS Hood. The bell was recovered by the group of divers operating from Octopus years later.

Also, in 2015 Allen found the biggest military ship ever built. It was a Japanese ship Musashi that sank near the Philippines during World War 2.

Numerous scientific missions were completed with the help of Octopus. Google rented the yacht and its submarines for its marine project. Governments and Navy authorities of different countries have been using the yacht for their purposes. Paul Allen hadn’t often visited the yacht, and after his death, it was advertised for sale in 2019. The initial price was 295 million euros, but after that, the price was reduced to 235 million euros. Shortly before that, the yacht was refitted by a German company Blohm+Voss.

Paul Allen once said that the yacht was too big when he was asked about it. So, yes, the size can be a disadvantage if we are talking about the Explorer class yachts. It can’t go wherever you want, the captain needs to check thoroughly if there are no obstacles for the vessel each time you want to change the route.

Fuel consumption is quite big as you may predict. The technologies of 2003 couldn’t ensure the optimal fuel economy. With growing prices for marine diesel, you’ll spend too much even for starting those eight super big engines.

Well, we couldn’t find more minuses in Octopus. Paul Allen, unfortunately, died in 2018. Jody Allen probably didn’t want to own the yacht, so it was refitted and advertised for sale. We believe there is nothing wrong with the old superyacht and the future owner will be extremely happy to have his own mansion on the water.