Sailing is extremely popular among rich people. It can be a sport or just a way to spend your free time. Today we are going to tell you about 3 sailboats or better say sailing yachts that are one of the most expensive sailing vehicles in the world. And, in our own opinion, they are the most beautiful, too.

Sailing gives the sense of freedom because a sailboat is powered by wind, it’s brought into movement by nature powers and that’s amazing. Yes, nearly all luxurious sailboats are equipped with motors, but it’s kind of a matter of honor for every owner to sail as much as possible without turning on the engine. These boats require skills and experience, they may be extremely expensive for those who never used a wing to swim. But still, these vessels are very popular, expensive, and exquisite.

We are going to talk about three of the most interesting sailing yachts. These are NGONI, Atlantic, and Georgia. These boats are all luxurious and huge, they are built by well-known shipyards and they are made to last. But we want to know more about these unique and unusual boats, so let’s dive in. 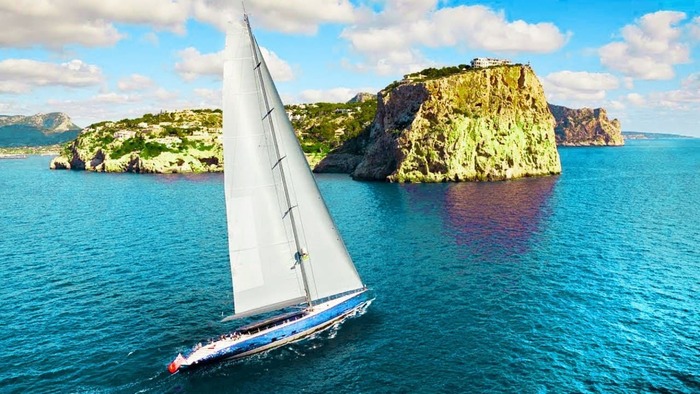 NGONI – one of the biggest sailing yachts in the world

This boat is 190 feet or 58 meters long. It was built by the Royal Huisman shipyard in 2017. When the initial owner came to the shipyard’s managers, he said: ‘Build me a beast, don’t build me a sheep in wolf’s clothing. This has to be an edgy and innovative weapon, fast and furious.’ And he was quite ready to give away millions for this beast.

The shipbuilders tried hard and created something absolutely unusual, unique, and extremely expensive. They used all the technologies they had access to for creating the beast on the water. This monster doesn’t look like the most technological private vessel in the world, but it may be somewhere near that.

NGONI is a product of an unbelievable combination of power and sleek design. The boat combines furious speed with a very calm appearance that doesn’t tell you much about the real power and capabilities. The rounded plumb bow with flush deck furlers is not just striking to the eye, but also creates less wind disturbance to the leading edge of the headsail than a conventional bow. There are hundreds of technological things that deserve a separate video and will take an hour to talk about.

NGONI has a manual steering system that is extremely responsive. If you want to feel the sail, it’s the best boat you could choose for this. The boat has one of the largest advanced composite rudders ever built.

The owner’s suite at NGONI deserves a thorough look. It’s a huge room that has a lot of custom furniture specially produced for the yacht. It also has a huge bathroom with access from two sides. There is a separate study with another bathroom in it. There is also quite a big gym with modern equipment.

The windows are huge, so it created a feeling of being outside even if you are in your suite. Every room has certain design features, although everything is built in a reserved style. The boat may not seem huge, but it is. Especially if you know what usual sailing boats look like.

As the shipyard says, NGONI is the spirit of individuality. Of course, NGONI has a built-in engine that can take the yacht to 4000 miles without refilling the fuel tanks. But its owner has been using the vessel mainly under sails.

This is a 64.5-meter-long yacht powered by wind only. Can you imagine? The boat is actually a classical racing schooner that was built by looking at the design of racing boats that were popular at the start of the twentieth century. Van Der Graaf shipyard created Atlantic in 2010. The engineers included all the modern sailing technologies and equipment to make the boat even better for the ocean.

The original Atlantic sailboat was built in 1903 and it was holding the record of crossing the Atlantic Ocean for over 100 years. Back in 1905, this ship needed 12 days to cross the ocean which makes its cruise speed near 17.5 knots. For that time, it was insane. Today Atlantic yacht by Van Der Graaf is even faster and safer.

Experts say that the Atlantic may easily be called the safest sailboat in the world. It’s also extremely comfortable to sail. Although you aren’t expecting to see a lot of rooms here, it has 6 suites for the crew, owner, and guests. The interior is classical, all furniture items are made of natural wood and they will last for years. There is a kitchen with all the necessary equipment, so long sales won’t be a problem.

Atlantic schooner is something exquisite that not many people can buy. Even if you can afford to buy it, there aren’t many people who could manage to sail – the boat is extremely big and it requires a lot of skills from you. Also, you’ll need a crew to sail, otherwise, you may get into bad accidents in the open sea.

We don’t know the price of the yacht, but you can rent it for a week paying $140 000 plus some expenses. Not a cheap thing, we should say.

Georgia by Alloy shipyard – the one to fall in love with

Yes, it’s a sailing yacht, so it’s quite practical in some things. It has wooden furniture and classical design, it’s quite long and not so wide to shorten the water-resistance and improve speed. But we could call this yacht the most luxurious among all sailing yachts in the class. Once you are on board, it’s hard to keep calling it a boat. It’s not a boat, it’s a real yacht. The sailboat was built in 2000 by Alloy shipyard and refitted in 2015. The technologies are quite classical. There is a motor for moving autonomously when there is no wind. But owners have always preferred sailing.

Georgia was a trailblazer for this type of yacht and it was the largest sailing boat at the time of its launch. It doesn’t require dozens of crew members, so it may be called a family cruiser. The boat offers 4 guestrooms, one owner’s suite with an adjacent gym, a huge area outside, and even a hot tub on the upper deck. Being a little less than 50 meters long, the sailboat is very easy to steer. Since 2009, Georgia has circled the world and has navigated over 130 000 miles.

The Caterpillar diesel engine offers 1000 horsepower and can make the boat cruise at 15 knots. It's an autonomous vessel that can be the best choice for long distances in its class. The interesting fact to consider if you want to buy a sailboat is that US citizens can’t buy the boat when in US waters.

The boat is currently for sale and you may buy it if you have $8 million to spend. It’s one of the most affordable vessels in the class and we suppose it’s due to the boat’s age. But Georgia proves to be a great sailing yacht that can last for years.