Ragdoll cats are probably the most adorable creatures in the cat world. They are big and fluffy, quite affectionate and beautiful. They are described as large and muscular cats with soft and silky coats. The breed appeared in the 1960s in the US. It was named Ragdoll because the first cats of the breed tended to limp and relax once you pick them up and that created a difference between other cat breeds that would fight people in this case sometimes. 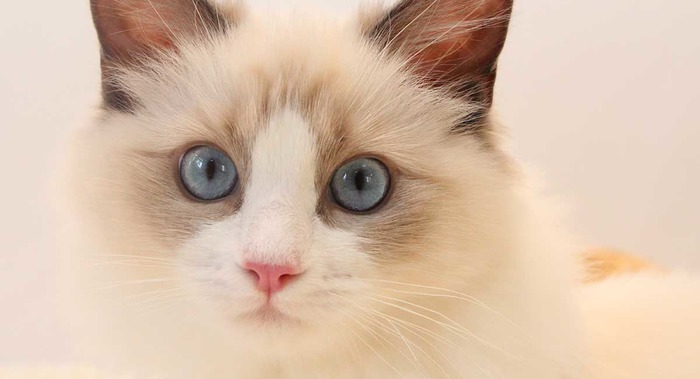 Ragdoll cats are particularly popular in the UK and in the US. They are known as puppy cats because they would follow their owner all the way around the house and on the street. Also, they are not as aggressive with other pets as some cat breeds.

Today we’ll reveal some facts that you probably don’t know about.

They always have blue eyes

These cats will always have blue eyes if they are purebred animals. If your cat has some other shades of eye color, it’s probably a mix. The cat with deep-blue eyes looks really fascinating. When it looks into your eyes, you sometimes even see some human-like features in its sight.

The pure blue eyes that look so wise and unusual caused one myth about the ragdoll cats. Some people say that they are much wiser than other cat breeds. But that’s just a myth, scientists say that these cats are just as wise as the majority of other breeds.

Ragdolls are one of the biggest cat breeds

Yes, there are Maine-coons and Norwegian forest cats that are slightly bigger. But if you compare ragdoll to an average cat, you’ll be surprised. These guys are huge and muscular, they tend to have a medium or long coat, so when you add the coat they seem just giants – like a middle-sized dog we would say.

These giants aren’t only big, they are also very strong. Thank goodness, they don’t attack humans and they are quite good with children. Otherwise, it would be very dangerous to have a ragdoll cat in your house.

They sometimes have dog-like personalities. But you have to consider that even cats of the same breed can have extremely different tempers. Ragdolls will even play with their owners outside by fetching the soft ball or some other toy. They are joyful and they are always glad when their owner comes home after work. This is the option that has only been available for dog owners usually.

It shouldn’t be a big surprise if you see your ragdoll cat carrying its favorite toy in the teeth and trotting along like a satisfied puppy.

This is a very quiet cat breed

Although there are some cats of the breed that are talkers, the majority of ragdolls are very quiet. If you don’t like those special songs in the middle of the night, you should buy a ragdoll! But there is a bad side to their silence. When they feel discomfort over something, they usually don’t give a sign of it. That’s why you never know when your cat is ill or when it gets angry.

Almost all kittens are white with only some dark spots. Their patterns develop usually between one and two weeks. It’s quite interesting that these cats are fully grown at 4 years of age. But if you see a 1-year-old ragdoll, you’ll never say that this is a very young cat. It will look like an absolutely adult and big cat of any other breed. They are adorable both when kittens and when grown-ups.

But up until they are 4 years old, they continue growing in size and they can also change their patterns. Sometimes ragdolls keep growing even when they are over 4 years old.

Their lifespan is up to 20 years

These cats can live between 15 and 20 years if they have a healthy diet and good emotions throughout their lives. But bear in mind that 20 years of lifespan wouldn’t be possible for outdoor cats or indoor/outdoor pets. Going out of the house will impose them to life-threatening diseases and traumas and this shortens their lifespan significantly.

So, now you know a lot of good things about these fluffy guys, let’s move on to some bad facts you won’t probably like.

These cats are NOT hypoallergenic. If you have any kind of allergy to cats’ fur, ragdolls aren’t your choice. Their fur is long and light, it’s going to be virtually everywhere in your house.

These creatures aren’t always kind and loving. They are still cats, so their personality depends highly on how they were raised. If you adopt a ragdoll wishing to have a cuddler, be careful. These creatures can sometimes hate petting and might attack human if he or she tries to catch and pet them.

One good thing is that ragdolls don’t have an undercoat. And you might think that because of that they don’t shed. But they actually do. Yes, a Norwegian forest cat will shed much more – but ragdolls still shed, and that may cause some troubles.

If you have a ragdoll, you may need to pay much attention to their behavior, because they don’t show you that they are sick. Sometimes they just start acting 'not themselves', but if you aren’t an experienced cat owner, you may not understand what’s happening.

And yes, they are going to mess up your house once they have the mood to play. You can do little to nothing with that.

Still, ragdolls are extremely beautiful big cats that will bring a lot of happiness to your life unless you are allergic to cats’ fur.