The world knows close to nothing about the real-life of dictators. We only rely on some facts from the not-so-fair press of the country where these dictators live and also on some journalists’ investigations. And yeah, we know quite a lot about Kim Jong Un and his family, because a lot of journalists and spies are interested in this person. But we know so little about Ri Sol Ju, Kim Jong Un’s wife. 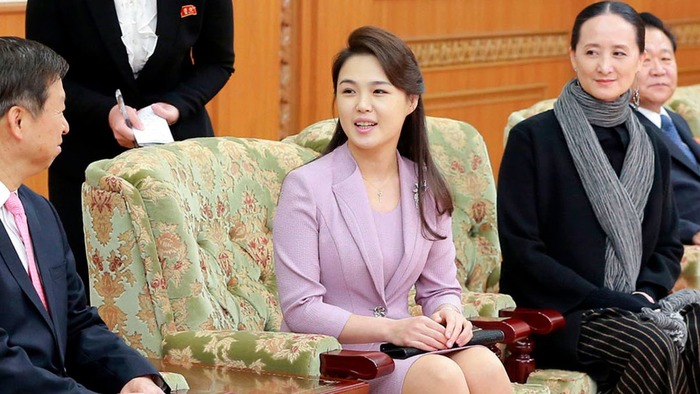 This lady has been there for North Korea’s current dictator for more than a decade now. People say that she has three kids with Kim Jong Un, but no one can say for sure if it’s true or not. She is said to have a big influence on her husband, but again, no one can prove that.

We only know that Ri Sol Ju is a really important person for the Kim family. And we are quite sure that her life isn’t as good as it’s described by some journalists. We believe that the marriage of Kim Jong Un has nothing to do with love and family feelings. Let’s get to know some facts about Ri Sol Ju so that you could solve this puzzle yourself.

What do we know about Ri?

The analysts are pretty sure that Ri Sol Ju is a pseudonym and no one can tell us her real name. Ri’s family has a political background and actually belongs to the political elite. Sol Ju is said to have studied in China and she is known to be a professional singer. But the North Korean authorities try to erase her past as a singer and cheerleader by destroying all the CDs with her songs. Ri attended South Korea in 2005 in a team of cheerleaders, she was 16 years old.

We don’t even know the real age of Ri Sol Ju. The most popular guess of her birth year is 1989 but there are other estimates, too. There is a legend that when being in South Korea as a cheerleader, Ri told a South Korean teacher that she wanted to take classes from South’s teachers as soon as possible after the two Koreas would be reunited.

Again, the Kim family has always been very secretive in marriage questions, so we only know the estimated year of their marriage. Reportedly, Kim Jong Il arranged the marriage for his son, Kim Jong Un, after he suffered a stroke in 2008. Some analysts believe that the wedding took place a year later, in 2009.

According to some sources, Ri had her first child in 2010, it was a boy. But there is a problem with confirming this information as there are no facts or pictures or any other information that would prove Ri’s pregnancy.

Analysts say that Ri sometimes goes off the public eye for a year and then reappears again. There were three times Ri Sol Ju disappeared from public, so we may assume that the couple now has three children, unless Ri gave birth to twins which is also possible.

Thanks to Dennis Rodman, former NBA player, we know that Jong Un and Sol Ju have at least two kids. When Rodman visited Korea in 2012, he then told journalists that he saw two kids, one of them being a newborn baby. In 2017 South Korean press reported that Ri gave birth to a third child. Also, in 2021 Ri reappeared in public after nearly a year of absence. Is it a fourth kid? Or maybe she was just taking care of her husband who apparently has some troubles with health? We don’t know.

There are analysts who say that Ri Sol Ju may be the grey cardinal of North Korea, but we assume that she is far away from politics. She rarely appears at some public events accompanying Jong Un. But it’s Kim Yo Jong, the sister of Jung Un, who probably makes political decisions and keeps some kind of power in the country. Sol Ju seems to be bothered with her children and she has no time for launching nuclear missiles and testing underground nuclear bombs which seems to be the main task of North Korean leaders.

We believe that Ri Sol Ju is a person who creates a good image for North Korean leader, Kim Jong Un, making him the man with a full family. A communist leader should be married and have kids, otherwise, he breaks society's rules and shows a bad example to young people in the country.

Other facts about Ri Sol Ju

Ri’s first official appearance in public was at Kim Jong Il’s funeral. She accompanied her husband for the first time then. The identity of Ri Sol Ju was kept secret until 2012 when the local TV presenter finally called this woman Jong Un’s wife.

Ri has been spotted with highly expensive handbags by Channel and Dior many times. These might have been the presents of the North Korean elite or the treats of Kim Jong Un. Her outfit is usually quite expensive, well, at least it looks expensive. No one actually knows who makes clothes for her.

She once met a Chinese delegation without her husband in 2018. That was basically the last major appearance of Ri in the country’s political arena.

That’s actually everything we now know about Kim’s wife. Sooner or later, more information will leak and we’ll update you. But now the country is still extremely closed and petrified with all kinds of leaks, so we can only guess what’s happening with the first lady as well as with the Supreme Leader himself.