Pickup is the second body type after SUV in terms of sales in the US. And it comes as no surprise, that EV producers are now rushing to create their first electric pickups. And some of them are really successful in the process. Like, you know, this all hype around Tesla Cybertruck finally makes buyers stand in line and look forward to seeing a mass-production car. But today we’ll talk about a way different car. It’s Rivian R1T, the truck that is able to take one of the first places in EV sales stats.

Rivian has been working since 2009 to create probably the best EVs on the market. In 2018 they claimed to start production, but up until now, we haven’t seen a single mass-produced Rivian car on roads. Today we’ll try to understand why there is so much hype around Rivian and when its cars are going to be available for purchase. 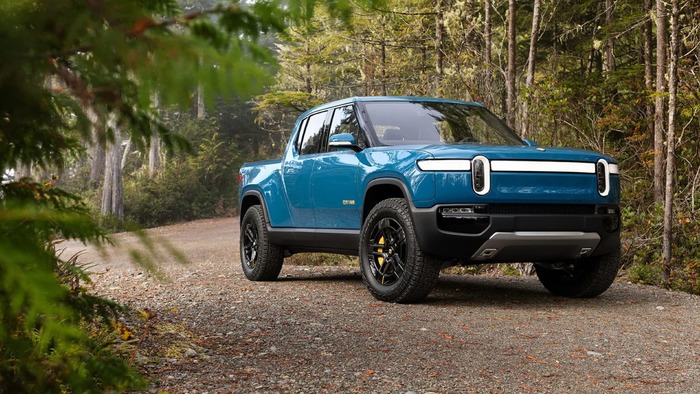 Rivian knew quite well that competing with Tesla will need something extraordinary. For example, some completely new technologies or maybe unbelievably low prices. The company couldn’t come up with any of the ideas, so they decided to change the market niche and create EVs that will sell well in their narrow sphere. Pickup and SUV appeared as concepts at the end of 2009, and now they take preorders for R1T pickup trucks. You can pay 1000 US dollars or 1500 Canadian dollars to reserve one of the first trucks that will be produced in the US.

You may think, what a bad idea it is to preorder the car you can’t even test drive. But in 2020 the company announced that it already had 30 000 preorders, and right away all other EV producers should have been afraid of the new company.

So, what’s the Rivian R1T? It’s the truck that will be appropriate for both on-road and off-road driving. The car is capable of autonomous driving. 0-60 mph acceleration will take you 3.2 seconds. 3 point 2 seconds, man! Now we see why those 30 000 people took out their wallets and gave away their thousand to be the first to try and drive a truck with the acceleration of a solid sports car. The range is 400 miles. Another surprise – this huge truck will be able to drive on one charge more than the majority of EVs on the market. The maximum speed is 124 mph which is not a surprise, as you aren’t supposed to drive a truck faster.

The R1T’s engine shows 700 horsepower and 1120 Newton meters of torque. The calculated consumption is going to be around 27 kWh per 60 miles. The 5.5-meter long truck will have 5 comfortable seats and will weigh around 2.7 tons.

The design of the car is quite simple. The most unusual thing is the headlight position. But as soon as you see a lot of Rivians on the road, you’ll get used to its design and it will be just a simple practical car for you. When it comes to off-road abilities, only the Cybetruck can compete with the R1T. It has enormous power and torque to get you out of any situation beyond the asphalt road.

If you need a truck to tow a trailer or, say, a big boat, Rivian is the good option to choose. In petrol trucks transmission is the weak point, so they are limited in towing capacity. For Rivian this problem is solved, there is no classical transmission in this car. So towing ability is just unbelievable.

Why do people still say Rivian is a bad option?

Well, we could actually agree that preordering Rivian R1T is not the best idea. There are a couple of things that support this presumption.

First, you couldn’t get a chance to drive the car and to understand if you like it. Can you remember the time when you headed to a car shop for buying a car and then during the test drive you understood that you better go with some other model? Why are you sure that Rivian will be good? This is not the Ford F150 in terms of driving experience, and you have to understand it.

Then, there is the second point. Rivian hasn’t yet produced a single mass-produced car in history. And some experts firmly believe that the company is a stock fraud. It doesn’t seem like that now, but until the company sells at least 10 000 real cars, you can’t be sure of its stability.

Third, you shouldn’t expect your car to be ready in 2022. If you order the R1T now, you’ll have to wait for a huge line of preorders to be delivered. Yes, they say that Rivian company can produce as many as 300 000 cars a year. But it’s all like fairy-tail for investors. We have to understand that the new plant is unpredictable in terms of production quality and pace.

Fourth, you even don’t know if the car is going to be of high quality. For example, if you choose to preorder Ford F-150 Electric, you may believe that the vehicle will have the best quality because Ford is the company with century-long experience, and F-150 is the car with numerous successful generations behind it. But you don’t know virtually anything about Rivian.

That’s good that the thousand that you pay for preorders is fully refundable. And we believe that Rivian R1T will be a good car after all. But now, given all those unstable economic factors, you shouldn’t believe the company just because it offers you some good picture to look at.