The world is quite sure that in 10 to 15 years we won’t have fuel-powered cars left. EVs are coming to get the market and we have to admit that the age of gasoline engines is over. Many people will have to decide what to buy next. And if a couple of years ago you could find Tesla, Nissan, and Chevy electric vehicles on the market, today the things are changing fast. New companies are born and they are here to get the traditional car producers to bankruptcy.

Today we are going to talk about Rivian and Lucid Motors. These two companies are based in the US, the world’s most prospective EV market, and they are most likely to be the first to present their new generation electric vehicles in mass production soon. Yes, they are both delayed with deliveries, but we believe that these companies are both worth your time – just get to know a little more about them. 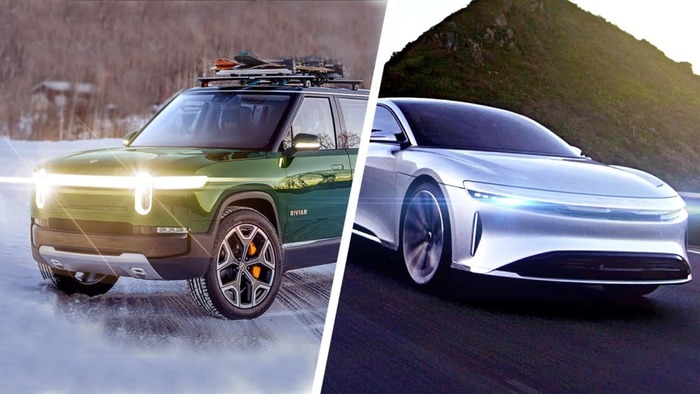 Rivian and its two mind-blowing concepts

Rivian is a company that is supported much by huge American businesses. Today, Amazon and Ford are known to be the major investors of Rivian – recently they bought a new set of stocks for 2.5 billion dollars and this explains the positive trend for Rivian stock prices. We may understand Amazon when they invest money into new companies, but Ford works hard to produce their own electric truck – F150 Lightning, and at the same time supports the competitor on the market – weird things are happening here.

Rivian R1T is the electric truck that is going to be the fierce competition for Tesla Cybertruck. The R1T is equipped with cutting-edge motors, a wonderful battery pack, and cool autopilot options. The truck will have over 300 miles of range, the 0-60 mph acceleration in 3 seconds, 11 000 pounds towing capacity, and 8 years of warranty or 175 000 miles. The body corrosion warranty will be 8 years without mileage restrictions which is great for buyers.

R1S will be basically the same car but an SUV body. The SUV will have trims with different range capabilities, there will be a 7-seat trim. 14 inches of ground clearance and the capability of driving in 3 feet of water will make the R1S one of the most capable SUVs on the market. The body will be made of aluminum alloy. The low center of gravity will also ensure wonderful steering and the best driving experience.

As you see, Rivian won’t be the last company on the market. The R1T will start from $67 500 for the base version. The cheapest R1S trim will be available for $70 000. And we would say this is an average price for an SUV of that size. But with Rivian you get the advantages of owning one of the most technological electric vehicles ever made.

Lucid – what can it offer?

Lucid Motors is now concentrated on delivering their first mass-produced sedans called Air. And in this sphere, they are competitors to Tesla Model S. But the future plans cover many car body types and so Rivian and Lucid Motors will be competitors soon.

Lucid Air is a luxurious sedan that offers great specs and wonderful technologies onboard. It starts with a 480-horsepower engine pack showing 406 miles of range. But if you are ready to pay much more, you can choose a 1080-horsepower version with over 500 miles of range. The car is now available for preorder. They are assembling it in the Lucid Motors plant, but the first deliveries were delayed.

Lucid Gravity is a much more interesting option for buyers. This car is now only a project, but it can become a mass-produced vehicle in 2023. We can only predict the specs, but we believe that the SUV will show at least 500 miles of range and will be much more economical than its competitors. The drawings published on the official website of Lucid Motors give us hints of what the car will look like, and it’s going to be really futuristic and beautiful. Hard to say which car looks at least partially the same.

Is Rivian better than Lucid Motors?

When you talk about the EV startup company, you may really hesitate whether it’s going to produce some real cars. In this case, you better look at who owns and sponsors the company. And also look at the capitalization.

For Lucid Motors main funds come from Saudi Arabia, and yeah, these guys have quite a lot of money to boost technologies to the next level. Lucid Motors' capitalization on the stock market is now close to $56 billion, and that’s huge, so the market believes in this company. Tesla capitalization is now ten times bigger, but don’t forget that Tesla has been working hard for more than a decade.

Today, Rivian is said to have over $25 billion of capitalization and that’s also not so bad for a company that hasn’t produced a single real car. Rivian mainly gets finance through stock sales and we see huge American companies investing money into this startup. So, we also believe that now it has firm ground for quickly growing up and selling quite a lot of cars.

The question is whether American buyers will love Rivian R1T and Lucid Air. This will be the crucial point in understanding whether these companies have a bright future in American and world markets or not.