We are looking forward to the grand opening of Merdeka PNB 118 and we hope that it will be finished by 2022 as planned. The skyscraper is the tallest building under construction right now and the tallest one in Malaysia. Its height is going to be 644 meters. There will be 118 floors and additional 5 floors below ground. The building will have 87 elevators for different purposes.

The project is amazing, and today we are going to tell you more about it. Merdeka 118 is going to be one of the world’s most spectacular buildings with a lot of architectural miracles that will remain unseen for the majority of the visitors. 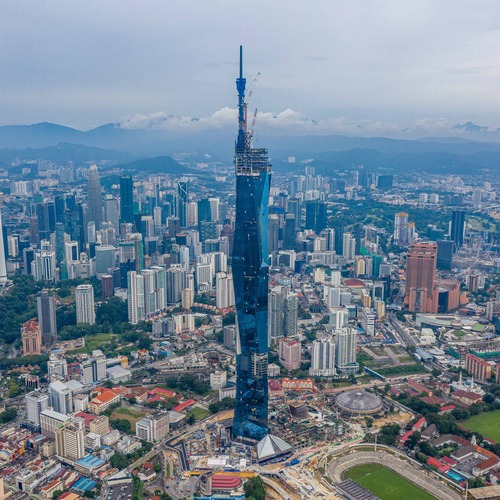 The project and construction

To build a 2113-foot-tall building, you’ll need to invest your time and money into the project. The construction is funded by PNB – Permodalan Nasional Berhad, the estimated budget as of now is about 5 billion Malaysian ringgit or approximately 1.2 billion US dollars. The building is going to offer 400 000 square meters of residential and commercial space.

They are going to create parking spaces within the complex for more than 8500 cars. The majority of the building is reserved by PNB and we believe that they will locate their headquarters there as well as give dozens of levels with office facilities for rent. The project is extremely ambitious and expensive, but we now see that it will be completed in time.

The design of the building has a lot of legends. One of them is that the design was inspired by the posture of Tunku Abdul Rahman with his hand raised when he proclaimed the independence of Malaysia. But there is no official version, so this is only a guess.

The building was designed by European companies and it’s going to get at least three international certificates that will indicate the eco-friendly features of the construction. PNB 118 is going to be the diamond of Kuala Lumpur upon its construction.

How will they use Merdeka 118?

The tower will be divided into different areas for business and residence. At least half of it will be rented as offices. There will also be a Park Hyatt hotel occupying the top part of the skyscraper. Four upper levels are going to be the observation area and the highest point in Kuala Lumpur and all over Malaysia, a human can get to. This will be the highest observation deck in Southeast Asia.

Merdeka 118 won’t be the only building in the complex. They are going to build three other skyscrapers around the building. These will be the residential homes with flats for rent and sale. There are going to be two big stadiums within the complex, one of them will be built from scratch, the other one will be reconstructed.

Also, they will create Merdeka Boulevard which will actually be quite a big park with a lot of trees and places for having rest.

The complex will change the way Kuala Lumpur’s center looks like. They will reconstruct and change 106 000 square meters of roads in the city. They will even build a 1-mile-long tunnel to connect the center with Federal Highway and reduce traffic congestion around Merdeka 118. They will build 800 meters of new flyovers so that cars couldn’t create problems for visitors and residents of the complex.

Are there any problems?

As of now, the building is being built. The main construction stage is basically finished. Now, they will start interior works and will take care of the space around PNB 118. PNB is a strong company that will have the project done if there are no bad things that may happen with any company and building.

There was criticism that over a billion dollars could be spent on other spheres in Malaysia like education and healthcare. But the Malaysian government supported PNB in investing in this project considering that it can bring major economic advantages.

And we agree that building the world’s second-tallest building is a good idea for attracting tourists, boosting the city’s economy, creating new vacancies and even new spheres for businesses. The building simply makes the city look beautiful. Given the commercial use of the skyscraper, it will return the money invested into construction works, in 10 to 15 years’ time. And that’s not so bad in terms of huge investments.

What are they doing now?

For now, the Merdeka 118 is nearly completed. Just look at its beautiful exterior. It starts shining with its glass and metal walls like the most precious architectural diamond all around Asia. And we are pretty sure that Malaysia Airlines will have to lease more jets to take all tourists, who want to see PNB 118, to Kuala Lumpur.