The franchise is owned by Mark Davis, an American businessman who also owns Las Vegas Raiders of the NFL. The team has been quite successful. In their 14 years in San Antonio, they qualified for WNBA Playoffs 7 times. The head coach of Las Vegas Aces is Bill Laimbeer. He put an end to a set of bad seasons of the team and shows wonderful organization and a really good game. 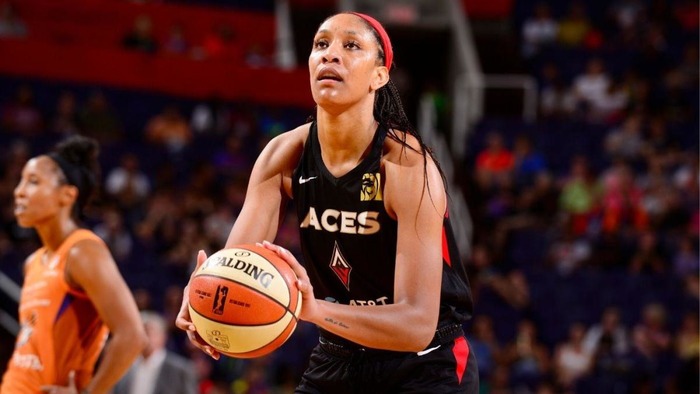 Although Las Vegas Aces never won WNBA Playoffs, they are always considered as a strong competitor and mighty opponent on the court. Today we’ll look at the brightest stars of the team.

We’ll start with Liz Cambage who you may know as the star of our channel. She is our favorite athlete and we adore her for being really sporty, beautiful, and extremely tall. Her height is 6 feet 8 inches and she is currently among the 10 tallest girls in the WNBA.

Liz Cambage has been playing in Las Vegas Aces from 2019 till today. She’s been showing good stats and she became one of the favorite women basketball players of the team’s fans.

Cambage takes her off-season time to play in China and Australia. She gets the biggest possible salary in WNBA which is slightly more than $220 000 a year. Now she is a real star of Aces and she often leads her team to wins.

Margo was born in Poland and she was known as the tallest basketball player in the world. Her height was 7 feet 2 inches. She played for the team starting from 1998 and up to 2005 when she was transferred to Connecticut Sun. Margo was a very talented player and she always showed good stats.

Unfortunately, in 2011 she suffered a heart attack and died. She will always be the legend of American basketball and her fame will be supported by Las Vegas Aces team.

Becky is not a tall woman, but she could teach anyone how to play basketball. Her technique was just amazing. She started her career just a couple of years after the first WNBA season and she was picked by New York Liberty. In 2007 she started playing for San Antonio Stars and spent 7 years being one of the most important players in the team.

Rebecca also played during her off-seasons in Russia. Since 2014 she’s been working as an assistant coach in San Antonio Spurs. She is the real star of American Basketball and she still makes everything she can to make basketball more professional and spectacular.

This woman devoted all her sports career to San Antonio stars. Right after she finished her college basketball career, San Antonio Silver Stars picked her during the WNBA draft. She spent 9 years with the team from 2006 to 2015 and then retired from professional sport.

Sophia was called to the WNBA All-Star game three times. She showed an average of 14 points per game and that’s quite good for WNBA. She also played for US National Team and was really helpful. She also played during her off-season time in Turkey and in China showing wonderful results and even winning Euro Cup with Galatasaray.

This woman is a legend of basketball. She is over 40 years old now and she is still an active player. Ann played for San Antonio Silver Star in the 2008-2009 season. She is thought to be one of the most talented players in the history of the club.

Her career is very rich, and she usually doesn’t spend a lot of time in one club getting more experience by playing in different countries. But the most interesting thing is that she showed her best statistics in San Antonio averaging 14.7 points per game. That’s nearly 30% more than her career average.

This wonderful player is now only at the start of her career. She’s been playing for Las Vegas Aces and San Antonio Stars since 2015. In her best seasons, she showed over 22 points per game on average, and that’s huge.

Dearica is quite a tall woman with her 6 feet 3 inches in height. She blocks really well and makes a lot of other work on the court. Now she is thought to be one of the leaders of the team along with Liz Cambage.

She is the youngest legendary player on our list. A’ja has been playing for Las Vegas Aces since 2018. She was born in 1996 and her career has only started. But even now we see that this girl will be the next star of the team.

In her best season, she averaged over 20 points per game and did an immense amount of work on the court. She is quite tall, too with her 6 feet 4 inches in height. A’ja even got the chance to play for a Chinese team during the off-season time in 2019.

Las Vegas Aces keep going to their best seasons and important wins. The team shows spectacular basketball and invites everyone to watch them live at Michelob Ultra Arena.