If you are a superyacht fan, you know the name of Russian businessman, Roman Abramovich. He is a very big fan of mega yachts, but what makes him different from you and me is that he can afford to buy a couple of them. Today we’ll concentrate on one of the yachts in his fleet. It’s the Eclipse superyacht that is known to be the third-longest yacht among all motor yachts in the world.

The yacht was built by Blohm + Voss shipyard and it was launched in 2009 and delivered to the owner in 2010. At the time of its launch, it was the first longest motor yacht in the world surpassing the previous leader, Dubai yacht, by 0.5 meters. The total length of the Eclipse yacht is 162.5 meters. And that’s half of the usual length of an average ocean cruise ship. Eclipse was built in Germany for Roman Abramovich and it’s one of the most expensive custom yachts ever built. 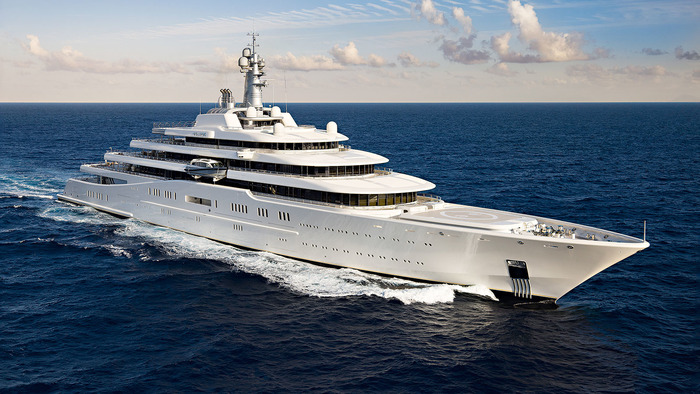 Specs and main features of the vessel

The classical steel hull and aluminum superstructure appeared to be the best decision for building the huge vessel. There are two helipads and they are often used for quick visits ashore. One of the helipads can be used for quite big commercial helicopters.

The diesel-electric propulsion system is also a classical choice. Here Blohm + Voss didn’t try and invent anything new. Four reliable MTU diesel engines work along with the electric generators to rotate Azipod drives. The overall power of the yacht is 39 700 horsepower. The engines consume marine diesel and they are quite expensive to use, but we believe the owner doesn’t care much about the consumption and maintenance cost.

Eclipse has 24 guest cabins; 70 crew members work there permanently when the vessel is on the route. Every room is like the presidential suite in an expensive hotel. It’s luxurious, all interiors on the yacht look just perfect. The owner’s stateroom is huge and luxurious, you are likely to think that you are in the world’s best hotel when you are here.

There are 9 decks on the yacht. The top level is dedicated to helicopters and the garage. The pilothouse is on the seventh deck. You will find the theatre, exhibition room, conference room, gym, the small disco club on the first deck. There are two swimming pools onboard, guests can have rest in several hot tubs.

The vessel uses a rotor-based stabilization system. This ensures that the yacht is stable during any weather, even when anchored. The stabilizers work perfectly and you can see it on numerous videos with the yacht. Guests won’t care if there is a small storm in the sea.

One important thing that is quite unique for yachts of this kind is the safety system. For ensuring extra safety, the producer implied the missile detection system. Even if your enemies will try to get you when you float the seas on your superyacht, you will get aware of any acts of aggression against your vessel. These Russian guys know how to stay safe if you know what we mean.

There are plenty of other important technical things you can find aboard Eclipse yacht, but they will take a lot of time to talk about.

The second deck of the yacht is dedicated to the submarine. This is quite a small separate vessel that is able to submerge to 50 meters and is often used as the main tender of the yacht. The submarine has huge windows to observe the beautiful underwater world. The owner may take another person with him to see the deep marine life. And we bet there are places in the world where you could give anything to just use this submarine for a while and witness the unbelievable views of the sea.

What other tenders does the yacht have?

We don’t know if the helicopter was produced specially for this yacht, so we aren’t sure if we can call it a tender. If it is tender, it might be the most expensive one.

Also, you’ll have a big boat to deliver people and loads ashore and from the shore to the yacht. There are two other boats each one having its own purpose. There is not so much information on the tenders of Eclipse yacht because Roman Abramovich doesn’t invite all people to share a trip with him.

How much was the yacht?

We don’t think that Roman Abramovich has ever told anyone how much he actually paid for his favorite yacht. But the estimates were around $400 million. Back in 2009, it was probably the most expensive custom motor yacht. Blohm + Voss spent nearly 5 years building and testing the vessel. The yacht has never been offered for sale since its owner got it, so we can’t estimate how much it should cost now.

But to buy a luxurious yacht isn’t enough. You also need to maintain it. And reportedly, Eclipse yacht needs around 60 to 80 million dollars yearly for maintenance. This isn’t the most expensive yacht in the world now, but there aren’t so many people around the globe who could afford to have such a yacht.

Roman Abramovich still feels it’s not enough. So he’s going to buy another superyacht called Solaris. It’s nearly finished by Lloyd Werft in Germany. The yacht is going to be 139 meters long but it will be even more expensive than the Eclipse cost a decade ago. Now the owner is going to pay 430 million euros or around 510 million US dollars. That will add another 60 million dollars to the owner’s yearly budget to maintain his fleet.