If you have some spare billions of dollars, you might be interested in luxurious yachts. They are the most expensive means of private transport even compared to private jets. These boats will never get cheaper unless you get into some crash and get into trouble. This is a great investment along with a great chance to show your fortune. There is a race between rich people of this world in terms of yacht length, height, and power.

Azzam is now the longest yacht with its 590-foot length. And we’ve already made a video telling you about the yacht. But there are a dozen of other yachts that are going to be made within several years, and they will be the longest superyachts competing with each other for every single inch of length. So, why are the superyachts only going up in price? And why do rich people love buying them? We tried and found the answers to these questions. 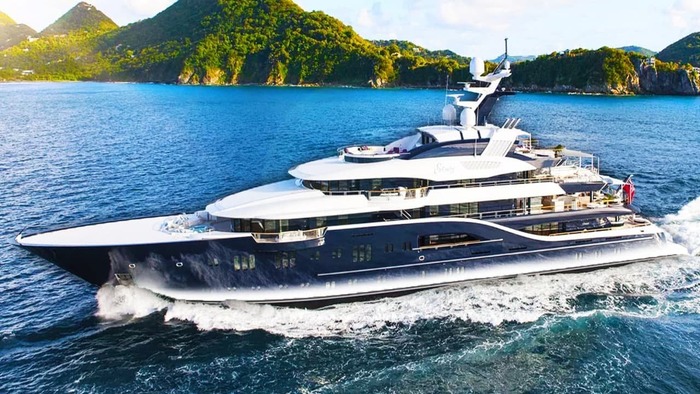 Average prices are going to go up

There is no such thing as a financial crisis for really rich people in this world. They are still going to buy luxurious and expensive things and they are ready to pay millions and even sometimes billions just to stand out. Cars don’t give this emotion of standing out even if they are built especially for the person and cost millions of dollars. But yachts do give this feeling. And that’s why they are actually one of the main targets for the rich.

We found some superyachts that are now for sale and saw impossible prices. 126-meter Octopus costs 235 million euros; 85-meter Ace will cost you 117 million euros, 92-meter Tatoosh is selling for 90 million euros and then there is a 67-meter Anna One that costs 53.9 million euros. So, the prices are roughly 1-2 million euros for 1 meter in length.

The shorter the yachts, the cheaper they will cost. If we look at the superyachts that are less than 50 meters long, they will cost much less. The 50-meter Exuma for example costs 16.9 million euros and the 49-meter-long Eleonora that is a sailing yacht by Van Der Graaf will cost you 6.9 million euros. So, rich people aren’t that interested in short boats and they won’t pay much for them.

Also, you have to understand that there aren’t that many yachts that are over 100 meters long. So they are unique and to buy them on market is great luck. Usually, these yachts don’t sell, they are manufactured by the best shipyards, especially for the buyer and sometimes we don’t even know their prices.

All famous shipyards keep making new boats and creating projects for new long yachts. They do it secretly so that their competitors couldn’t do the same. It all resembles the cold war between yacht producers and designers, and we are fond of looking at new vessels arriving on the market or bought by the rich.

Luxurious yachts are made by a bunch of shipyards

Building a superyacht isn’t that easy. You aren’t supposed to build a big yacht if you have little experience in shipbuilding. So there are some companies that are specialized in building yachts for rich clients. They don’t usually build boats for sale, but you can order the vessel that will be built according to a specially designed project.

The price will depend on a lot of important things like the technical side, interior preparation, materials, and other factors. But you have to be ready that the price will be more expensive than if you just try to find some used yacht on the market. The advantages of ordering a superyacht are obvious: every inch of it will be constructed as you wish.

The most luxurious yachts are constructed and built by just a couple of shipyards. These are Lurssen (this one built Azzam by the way), Benetti, Nobiskrug, Admiral, Jadewerft, Nicolini, Oceanfast and some others. These companies are leading in the world, though some of them just produce one yacht a decade.

Lurssen is known to be the world's most successful company in yacht building. If you buy a yacht from Lurssen, you get lifetime support, huge perks for remaking your boat or repairing it, help in any part of the world, and other advantages. Though, you are unlikely to find even a used boat by Lurssen for less than 1 million dollars.

The prices for superyachts keep going up

As superyachts, we only see boats over 100 meters long. These boats are unique and they are going to be sold more expensive in the future. When Roman Abramovich orders his next yacht, he always thinks about investment. If you buy a tiny shabby 50-meter-long boat, you are going to lose half of its price within the next 5 years. Another quarter will be lost in the next 10 years. But if you buy Azzam, you are supposed to sell it even more expensive than you bought it. But there is still one secret.

Once someone buys or even orders a longer superyacht, you get into trouble with the price of your boat. It starts falling down quickly as it won’t allow the buyer to stand out. Azzam Yacht was bought for an estimated 600 million dollars. We believe it could be sold now for $650 million easily because there are some people who want to own the longest private yacht in the world.

But let’s look at the Tatoosh yacht. It was built by Nobiskrug in 2000 for Craig McCaw but it was bought in 2001 by Paul Allen, co-founder of Microsoft. The estimated price was 100 million dollars back in 2001. Today Paul Allen is still the owner and he’s been trying to sell the yacht for the last 7 years. Today the price is around 110 million dollars. It may seem a good deal because it was bought cheaper 20 years ago. But let’s count the inflation and find out that the boat was bought for 156 million dollars in today’s money. The losses are immense.

And still, yachts aren’t losing their price as fast as cars or planes. A 20-year-old car will probably cost 500 dollars even though you bought it for $50 000 when new. And that’s one reason why the rich are buying these huge boats and superyachts.

These people don’t even usually use their yachts

If you are into yachts and boats, you may know the Russian businessman Roman Abramovich who owns Chelsea FC in London and also owns one of the most expensive and luxurious yachts in the world. The Eclipse yacht initially cost $620 million back in 2010. Or course, the price is reported by the press and estimated by experts, Roman didn’t tell anyone how much he actually paid for the boat. But still, we believe the estimates are quite precise.

So, the question is if Roman Abramovich ever has some days off to relax on his favorite expensive toy in the oceans. He’s sometimes seen near French shores and he sometimes uses his yachts for gathering important people for meetings and weekends. After his divorce, Abramovich spend some weeks on his yacht floating around Europe, but that was the single time he used his boat for so long.

And there is one more strange thing: today, a new yacht is being built for Roman in Germany. The yacht will be called Solaris, and it’s about to be ready. You’ll be amazed to know that he reportedly spends 65 million dollars a year to maintain his fleet.

Sometimes Abramovich uses his boat for charity or for some cool events. For example, he let the Chelsea football player, Frank Lampard, propose to his girlfriend on the Eclipse yacht. But Roman rarely uses his fleet for renting it out and getting money. These Russian businessmen are quite tough guys, you know.

Unique boats and yachts will keep getting more expensive

If you want to make money using your boat, don’t ever buy a mass-produced vessel. It should be a unique thing, one of a kind. If it was produced by a famous shipyard and there are no other boats of its kind, it will be a hot item on the market. Even if we are talking about relatively small boats, they will still be expensive and desired by buyers.

But still, superyachts aren’t made and bought for earning money. They are made for your soul. Even if you don’t use the bought every single day of your life, the fact that you own a unique vessel will bring good feelings.