Tall models are a rare breed, and at a staggering 6 feet 3 inches Amazon Amanda is one of the tallest models in the world. The 45-year-old makes much of her income from modeling, Instagram ads, and also from fans who love looking at her new pics and videos on social media. Amazon Amanda is a supersized model, she weighs 280 pounds, and she still looks amazing.

Her main way to make trendy pictures is to make men feel like dwarfs. In many of her Instagram pics, you will see her holding a man in her arms or even on her back. These pictures actually show us how big she is. Amanda has never been shy about her body and she has always known her advantages. It’s very inspiring that she managed to turn something others would take as a big disadvantage into her main asset in life. 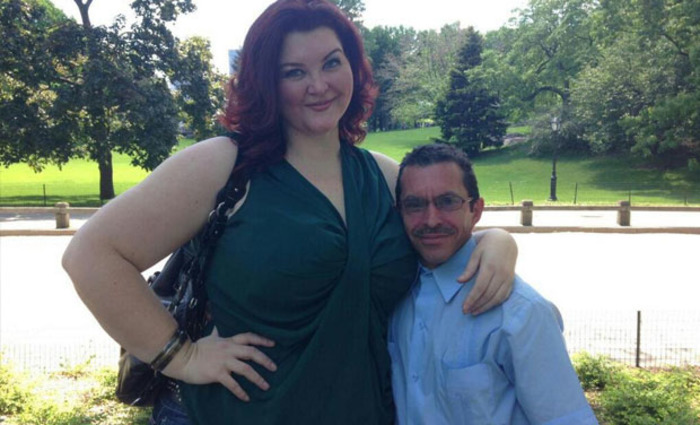 At the age of 12, Amanda was already 6 feet tall and she weighed over 200 pounds. She says she doesn’t like remembering her young years because she was bullied much and she was determined to change the way people percept her. And she obviously did it. Now Amanda is a creator and influencer, she’s gaining popularity quite fast. Especially in this time, when people start to understand that beauty can be different. And unconventional beauty is now even more desired.

In 2003, when Amazon Amanda was in her 20s, she found out there was a massive subculture of men with height under average and they loved being compared with tall women. She signed up with an agency that was hiring tall women. Just in a couple of weeks, she was on the plane to Tokyo for a photoset with a client. She started making big money by just staying beautiful and making pictures with men all over the world. That’s what she’s been doing for quite a long time now. And this is exactly what her height and weight fit for.

Amazon Amanda has been criticized many times for doing something immoral and bad. But she says that she doesn’t feel it’s bad – there is no nudity or any other bad context in her pictures. She just helps other people get wonderful pictures that seem to be at the edge of reality. And she is very successful in her business. It’s not a surprise, because Amanda is very different from ordinary girls, and she is different from other tall women we have told you about in our channel.

Amanda says it’s really hard to find a boyfriend for her, and her relationships don’t usually last long. Guys are intimidated by her height and they feel small and vulnerable. But men don’t like feeling that way for a long time, so the relationship is a difficult topic. Amanda’s job adds some problems to her private life, too. But she stays positive and believes that her man is still to be met.

We have to admit, Amanda is really strong. When you see guys jumping on her back, you won’t see a moment when she shows it’s hard for her. She’s always glad to take a picture with a person to show the unbelievable contrast of the heights.

When people see her in the street walking with her client or with any of her friends, Amanda gets a lot of attention. People even sometimes stop her to ask questions. And she is usually glad to chat with them and to share whatever they want to hear. Amanda is an open person, although we are sure she had a lot of bad experiences when talking with other people and getting criticized for what she does for a living. We love the way she looks and the way she uses her unconventional beauty.