We've gathered music statistics and facts and found out that the average lifespan of a song in the charts is 45.3 days. That’s exactly the period during which a modern track can be at the height of its popularity. This can be the most impactful music stats for artists, performers and colaborations to build up their work efficiently.

So how did we find this out? We gathered data from the Hot-100 on Billboard and looked at how tracks were moving through the TOP-100, TOP-10, TOP-3, and TOP-1 charts. We looked at 804 tracks by 465 performers and collaborations. That’s the exact number of songs that were in the TOP-100 chart on Billboard during the last year. So, here's the live music statistics article.

Here is a Summary of Our Key Findings

We have to admit that only 249 tracks out of our samples held this rating for more than an average of 45.3 days. The other 559 songs, or 69.5%, survived for a less-than-average amount of time. Surprising music statisctics in the United States, right? Another interesting fact is that 42.6% of tracks enter the TOP-100 for one week only and then leave the charts forever. Just think about this figure – nearly half of all modern music is popular for only one week. We also wonder to know what would be the video music statistics for clips. That could be the next topic for investigation. A total of 24.5% of all songs were in the charts for over 10 weeks. And only three hits stayed in the charts for 48 weeks. One track spent the whole year in the TOP-100 charts, our musci statistics databese says.

Here are some more images of music stats: When analyzing the TOP-3 charts, we found that remaining there is much harder – on average, songs spend about 28 days in the TOP-3. During one year, 39 tracks by 37 performers were presented, and we found that 61.5% of all TOP-3 songs leave the rating faster than average. Over half of successful songs experience success for a relatively short time – they are in the TOP-3 for one week only, and around 10% of tracks manage to maintain a presence in this competitive chart for 10 weeks or more. Our leader in terms of popularity was in the TOP-3 for 17 weeks of the year. 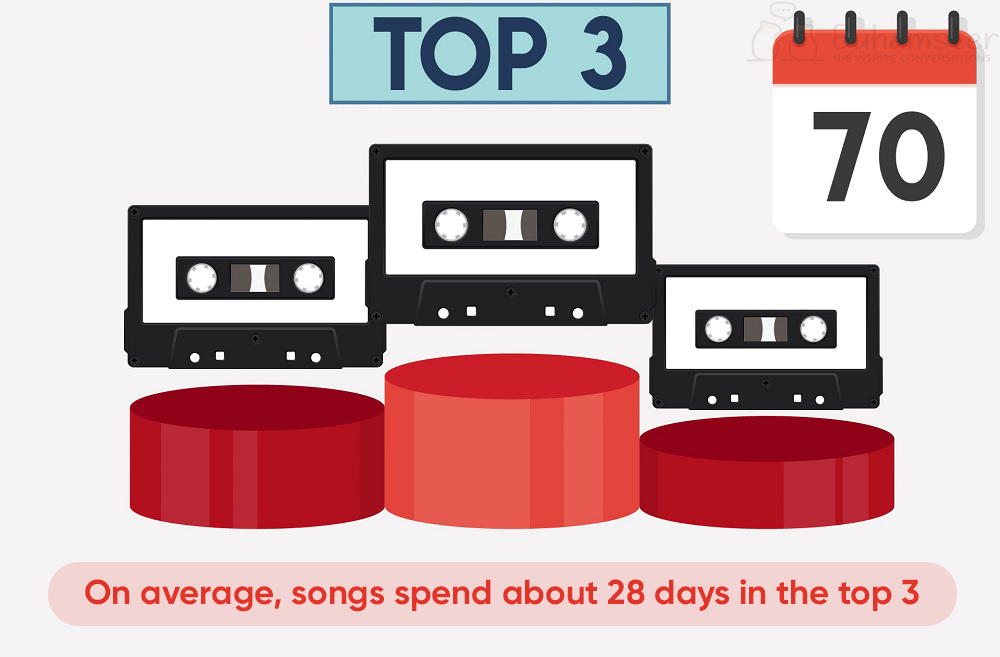 Staying in first place in Billboard’s charts is possible for an average of 16.5 days. Throughout the year, 22 songs by 20 performers were presented here, and only 27% of all leading songs held on for longer than average. A total of 68.2% of tracks hold the top spot for one week only, and only 4.5% of them manage to hold their lead for over 10 weeks in a year. Only one song stayed in this chart for 11 weeks. After looking at our findings, we can say that a modern song is at the peak of its popularity for around 45 days. However, rare hits can stay in the top slots in the charts for 40 weeks of the year, but there are only a few of these.