Many people are interested in the biggest constructions all around the world. If you are keen on soccer, you might want to know that the biggest stadium in the world that is built for this type of sport has 114 000 seats. And it’s not situated in Europe where football is the main sport. It’s located in Asia. If you want to visit this stadium, you’ll have big problems with crossing the borders or even finding the way to get to the country. Because the biggest soccer stadium in the world is hidden in Pyongyang, North Korea. This is probably the most closed and unfriendly country for tourists in the world.

You may start asking questions like why have they built such a huge stadium and how on Earth did they do it in the country with the technologies much behind the times? As you may predict, they were constructing the stadium without inviting international architecture companies and without paying money to European or American construction firms. 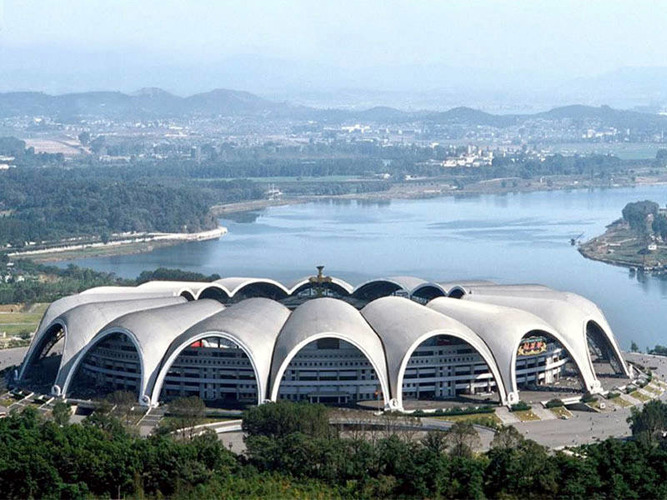 Let’s start with the stadium itself. The venue is called Rungrado 1st of May Stadium. It’s a multipurpose sports stadium that may host football matches, athletic events, concerts, and of course speeches of North Korean dictators. The stadium opened in 1989, on the 1st of May. It occupies nearly 51 acres or more than 20 hectares of land. The official seating capacity is 114 000, and according to this figure, there is only one stadium in the world that can compete with the North Korean venue. The cricket stadium in India called Narendra Modi Stadium is said to have 132 000 seats. For comparison, the biggest European stadium is Camp Nou in Spain with slightly less than 100 000 seats, and in the US it’s Michigan Stadium with 107 600 seats.

The stadium is being used for football matches, sometimes it hosts some athletic events. But the main event here is the Arirang Festival that is today called the Glorious Country. This is a mass gymnastics and artistic festival with thousands of sportspeople from all over North Korea taking part in the games annually.
The design of the stadium resembles a magnolia blossom. It’s 60 meters high. The stadium was originally constructed to have 150 000 seats, but it was then rearranged and changed to its current capacity of 114 000 fans.

You may wonder why the country with famine and an awful economy would need a huge stadium, bigger than any sports stadium in the world. The answer is quite simple. After the 1988 Summer Olympics were awarded to South Korea, North Korean leaders wanted to show that their country wasn’t worse in terms of sports. They placed a bid to host the 13th World Festival of Youth and Students in 1989 and after the bid was approved, they started building the stadium that would show all the might of North Korea to the world. Actually, the festival was the only big international event that this stadium has ever hosted.

After that, there were mainly local football matches, political speeches, and also inter-Korean summits at the stadium. Most of the time, the stadium is just closed and waits till Kim Jong Un comes up with a new idea of how to use it.

Unfortunately, the North Korean leader never shared how much they spent on building the stadium. If they shared, society would probably demand their resignation. The problem is that after 1995 North Korea has been struggling with famine, millions of people die because they can’t find enough food for their families. Spending billions on a stadium like Rungrado 1st of May Stadium wasn’t a very wise idea. Yes, the costs were huge, and even now, millions of dollars are spent yearly to maintain the venue.

We should also note that there are skeptics who don’t believe that the stadium in North Korea might be bigger than Camp Nou or Michigan Stadium. It really looks smaller on pictures and in Google Maps, so we should ask Koreans to count their seats once more. Although, the stadium is officially registered as a venue with 114 000 seats.

Interestingly, there are virtually no other megaprojects in North Korea, but the stadium and nuclear missiles. Pyongyang hasn’t seen new iconic buildings for decades, but the unfinished Ryugyong Hotel. The money isn’t invested wisely, and there is not much money after sanctions of nearly all powerful countries. Though, we hope that Pyongyang will keep developing and will find the way out of the crisis to host some great international events on their Rungrado 1st of May Stadium.