Association football is the most popular sport in Indonesia. And Jakarta obviously has the most popular teams that play for their fans nearly every week of the year. But the stadiums are a big problem for the country. In small cities, there is no budget to build good modern football stadiums, and in big cities, there is virtually no place for such huge constructions. Nevertheless, Jakarta International Stadium is going to be built soon, and it may be one of the most beautiful football venues in Asia.

The stadium is going to be the home of the Persija Jakarta football club. The previous stadium of this team, called Lebak Bulus, was demolished for building a train station for new lines of the Jakarta train system. Now Persija plays for thousands of its fans on some old fields that need total renovation. Additionally, the old stadium could only host up to 25 000 people and that is not enough for the team currently.

Jakarta International Stadium is now in process of construction. And today we’ll tell you more about it and also will compare it with Santiago Bernabeu. 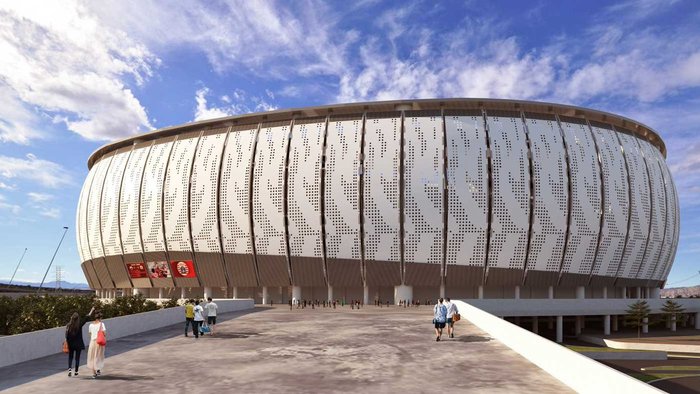 The new venue will mainly be used for football matches of Persija, but the city authorities will also use it for concerts and other events. One of the problems for building a stadium that will fit all national and international requirements is the lack of place in the city. Jakarta has 10.5 million people in a relatively small area, so population density is insane. Building the stadium outside the city isn’t a good idea for commuting, so they found the only place that could meet the standards.

The construction started in 2019, although the need for a new stadium in Jakarta was clearly seen starting from 2000. Now the project is nearly half completed, and they won’t be able to open it at the end of 2021 as it was planned before. But the construction works are in progress, they haven’t been stopped completely during the pandemic. So we believe that in 2022 Persija Jakarta will be able to play their first matches and to bring some joy to their fans in the new stadium.

In the stadium area, they are also going to build a hotel. There will be an extended car parking facility.

The stadium is going to be 72 meters tall which makes it one of the world's tallest stadiums. The stadium design is said to be inspired by traditional Indonesian clothes called Betawi. The field will have a hybrid grass which is a mixture of natural grass and Italian artificial turf. This will ensure that the field suits FIFA regulations and the stadium will be able to host matches of World Cups and other international events. The retractable roof will cover nearly all the fields being 100 meters long. The roof is something that makes the stadium one of a kind. In Asia, there is only one more retractable roof stadium located in Singapore.

On one side of the retractable roof, they are planning to make a sky-view observation deck. The observation area is 70 meters high above the ground and it offers a spectacular view of the North Jakarta area.

The construction cost is estimated to be $288 million and that’s more than two times cheaper than the costs for Santiago Bernabeu renovation in Spain.

Both stadiums suit FIFA rules and they are perfect in terms of football. But there are still some differences that we should note.

Also, the stadium in Jakarta will be able to host 1000 more people than the venue in Madrid.

Santiago Bernabeu is located basically in the center of Madrid with wonderful ways to commute. For Jakarta International, they will build special subway stations to cope with huge crowds of people during football matches and concerts. The stadium in Indonesia is located less conveniently.

If you try and compare the design of the two stadiums, you aren’t likely to find out which one is better. Santiago Bernabeu may seem to be more classical, and many people will like it. It’s not that modern in terms of shape because the stadium wasn’t built from scratch, but it was only reconstructed. The Jakarta Stadium was planned and built from scratch by probably the best Asian architects, so it looks more futuristic and still contains something from the local culture.

Both stadiums are great, but they are situated in completely different parts of the world, so they aren’t likely to host any common football events ever. And still, they have a lot of things in common, and this makes it interesting to compare two stadiums from completely different worlds.