You probably know that Rivian R1T is going to appear on American roads till the end of 2021, and this is a huge change in how we see electric vehicles. This truck is going to become the first mass-production car of the new brand, and no one actually knows what to expect from the vehicle. But still, one year ago, Rivian claimed to have got 30 000 preorders for the R1T truck, and we can only predict how big this figure is right now.

Rivian R1T will probably be the first electric truck to officially start deliveries in the US and in the world, but it certainly won’t be the only one. Tesla is preparing its Cybertruck for mass-production and deliveries, and also Ford announced it’s going to produce an F-150 Lightning truck which is going to be fully electric. Will Rivian be better than competitors? Today we’ll try to answer that question. 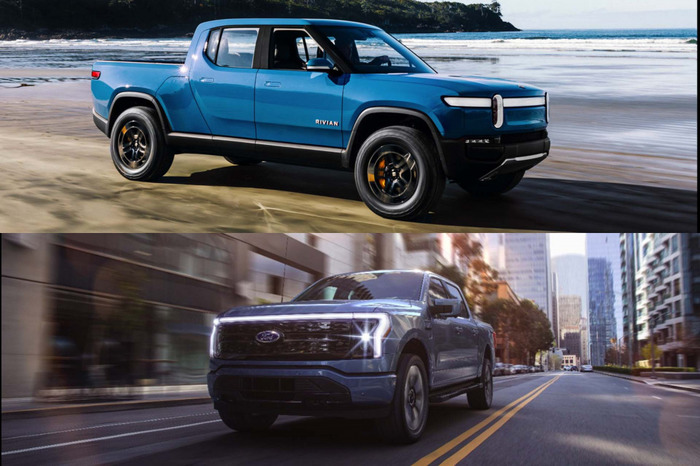 R1T is going to provide wonderful features for those who want to travel in the car. It will be a very fast and comfortable vehicle with a multi-purpose truck body that can be easily transformed into a kind of house on wheels.

The truck interior will be quite laconic. There will be two large screens for all major information and control. The wide body will give a lot of space for the driver and passengers. The second row of seats will be also quite comfortable and spacious, not like in many other trucks. The interior will be produced with expensive and long-lasting materials to withstand any kind of use. The vehicle itself will be really practical and great to drive in any condition.

There is a large trunk under the front hood where you would expect to see the engine. There is also a big storage compartment behind the cab and in front of the bed. And there is another lockable compartment located in the bed. The compartment which is located between cab and bed is used in some versions for placing a kind of field kitchen for those who love traveling in a car. And it looks really weird, but we can only imagine how great it is to have a kitchen during your ride through some desert places and through wild nature.

The F-150 electric truck is going to be launched in 2022, and there is still no precise date for the launch. But we already know quite a lot about the vehicle. Let’s look at its interior first. The F-150 Lightning is going to have an interior quite like the gasoline F-150 trucks. The only important change is the large infotainment system. All the other things will not be revolutionary, it’s just the F-150 truck that you probably know well, and it’s been the best-selling truck in America for many years.

Ford will concentrate on quality, practical things, verified experience in producing trucks for all kinds of conditions and roads. And yes, here they are, real experts, and could teach any Rivian or Tesla how to produce real cars.

But Ford F-150 electric truck won’t have so many luxurious things as Rivian R1T, and it won’t be as stylish as other EV trucks that are going to be delivered soon.

For those who would like to change the gasoline version to the electric one, they will find a huge cargo compartment instead of the gasoline engine in the front part of the truck. Basically, all other things will remain the same as in the current version of the F-150 truck.

Specs of EVs are something we can talk endlessly about. For example, Ford F-150 Lightning is known to have up to 10 000 pounds of towing capacity. But in 2019 during one of the first presentations of the vehicle, Ford showed that the truck was capable of towing a 1-million-pound trailer chain with other F-150 trucks. This was spectacular and promising.

Rivian says that the R1T will be able to accelerate to 60 mph in 3 seconds, and F-150 Lightning will be much slower – 4.3 seconds to 60 mph. Ford will introduce engines starting from 426 hp and up to 563 hp. The cheapest R1T will have 800 hp and more depending on the chosen trim. The range of Rivian R1T is claimed to be 300 miles plus, while Ford claims to provide 230 miles per charge in cheaper versions and up to 300 miles in the trims with larger battery packs.

Rivian seems to be a little better in all specs, so buyers might choose this vehicle for being faster, more powerful, and even more beautiful in some ways. But still, we can bet there will be thousands of Americans who will want to buy F-150 Lightning. And there is one simple reason – the price.

R1T will start at $67 500, the price includes all tax refund options and other perks. The better trim will cost much more. You can’t preorder the vehicle now, because all the available reservations were made, now you’ll need to wait until January 2022, and this is a positively estimated date of launch.

Ford hasn’t announced the price for the Lightning truck, but they have given quite a lot of hints that the truck will be much cheaper. And experts estimate the cheapest version of F-150 Lightning to cost a little more than $40 000! The most expensive trim called platinum is going to cost around $70 000. And this is going to be the cheapest electric truck you can get on the market.