The new superyachts are always a wonderful topic for discussion. So today we decided to look at a brand-new yacht built by Lloyd Werft in Germany. This is the new yacht for Roman Abramovich, the Russian billionaire who is known to be fond of superyachts. You probably know that Roman has another superyacht called Eclipse. This is the third motor yacht in the world by length, only Azzam and Fulk Al Salamah yachts are longer.

You might wonder why he needs a new yacht that is smaller than Eclipse. The answer is simple – you don’t always need a huge vessel, and if you have close to an unlimited supply of money, you will buy the things you love. Solaris yacht is one of the most unusual vessels among superyachts, and we want to show you more details today. 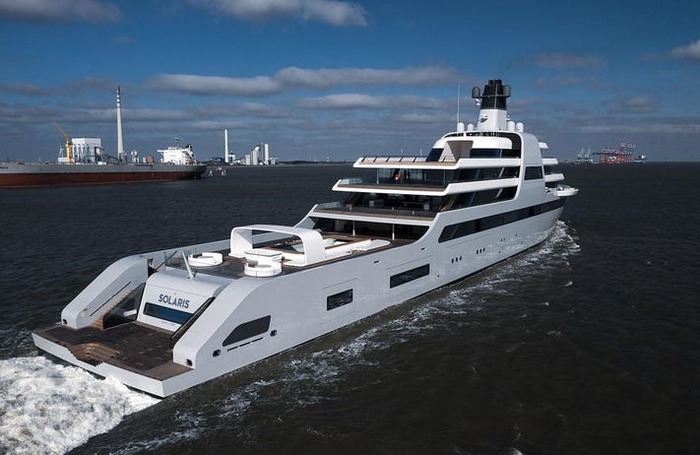 In terms of size, the Solaris yacht is 139 meters long, the beam is 21 meters, and the draft is approximately 5.9 meters when fully loaded. The yacht is not as huge as Eclipse, but it’s much more technological. That’s why you shouldn’t expect Solaris cost much less than Eclipse. By the way, Solaris will take 15th place among the longest motor yachts in the world. And it’s rumored to cost around $600 million!

Eclipse was built by Blohm And Voss shipyard, but Solaris was ordered from another German company called Lloyd Werft. The company is known for building custom superyachts with luxurious interiors and cutting-edge technologies onboard.

The new yacht was delivered to the owner in 2021, and now spotters from all over the world start releasing their footage showing the new vessel in different locations. Though much of the footage comes from sea trials and we presume Roman Abramovich hasn’t had much time aboard his new yacht yet.

The superyacht features a standard aluminum superstructure and a steel hull. The vessel is powered by the newest MTU diesel-electric engines, so the vessel is hybrid. 6 main engines produce up to 13 950 horsepower, and there is one more 12-cylinder engine working as a generator that shows 1740 horsepower. Two azipods made by ABB Group move the yacht. The maximum speed is said to be around 18 knots, and we believe it’s quite slow for the types of engines the vessel has. But the data isn’t official, so we’ll need to wait until more information is revealed.

Solaris yacht will need 60 crew to ensure that the journey is safe and comfortable for every guest. There are 18 staterooms with big double beds, so the maximum capacity is 36 guests. Mark Newson LTD Company was in charge of the exterior design, and this is probably the point that will cause many arguments.

If you look at the yacht from its bow part, it looks gorgeous – just like a huge superyacht should look. But at the stern part, it seems that the builders forgot to build something. Seems like they were building the yacht in the center when they ran out of materials, or time, or inspiration, so they decided to leave it like that. The design is something that differs Solaris superyacht from any other yacht out there. And we love the way the vessel looks, but it’s still hard to say it’s a conventional superyacht.

Such design provides just an insanely big terrace for chilling out. All the stern part of the ship is actually an open terrace. You could ask us why a person would refuse to build more rooms in the yacht like this instead of making an empty terrace. But this is the question to ask Roman Abramovich.

Solaris is an explorer yacht, so the main purpose of the vessel will be to cruise for long distances with high average speed and to ensure safety in dangerous weather. This ship is equipped for professional diving so it may be used for organizing expeditions like Paul Allen’s Octopus yacht was previously used. And this partially explains the unusual design – you will have plenty of open space for placing your diving equipment and all artefacts you will be able to get out of the sea.

When it comes to the interior of the yacht, you’ll be surprised to see quite classical design features. Calm colors and shades, lots of wooden things, grey couches and beds, and minimalistic styles of most cabins make the yacht look quite simple inside. But every room is actually a piece of art. The main idea of Solaris is the comfort of the guests. The highly technological interior offers a good experience for everyone on board the vessel.

There’s still not much information on tenders and entertainments on board the yacht. But we believe this vessel will be used for a different purpose than the Eclipse yacht. Solaris will be more of an expedition yacht for scientific researches, investigation of seas and oceans as well as the vessel for relaxation and holiday trips.